10 awesome things you should see and do in Toulouse

By: ynysforgan_jack
In: France, Toulouse, Travel
With: 0 Comments

Are you heading on a city-break to Toulouse in the south of France? Here are 10 things for you to see and do including Marche Victor Hugo, Musée des Augustins, Pont Neuf and Basilica of Saint-Sernin.

Due to the pink brick used in many of its buildings, Toulouse has earned the title of La Ville Rose, which translates as ‘the pink city’. It is located on the banks of the River Garonne and its one of the biggest cities in France.

You’ll see from this list that Toulouse is home to fascinating museums, interesting churches, grand squares and a lot of places to eat. 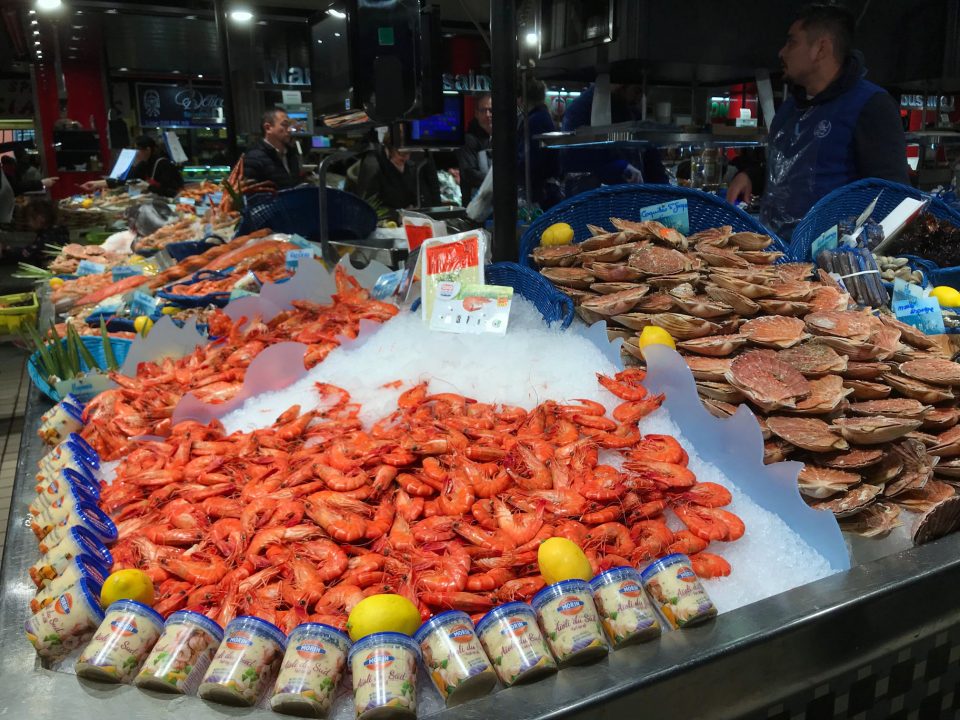 Are you a big foodie? Then a great place to begin your trip is at Marche Victor Hugo. This is an indoor market with a variety of food on offer. Indeed, the selection of culinary delights on display includes fruit, vegetables, pork, rabbit, beef, sausages, duck, seafood, cheese, bread and pastries.

There are some peculiar items on display such as duck heads, cow heads, brains and some stuff you probably won’t even recognise.

As well as trying the food, there are a few bars for you to get a beer or a glass of wine from too.

You can tell Marche Victor Hugo is a superb market, this is evidenced by the number of local people shopping here too. 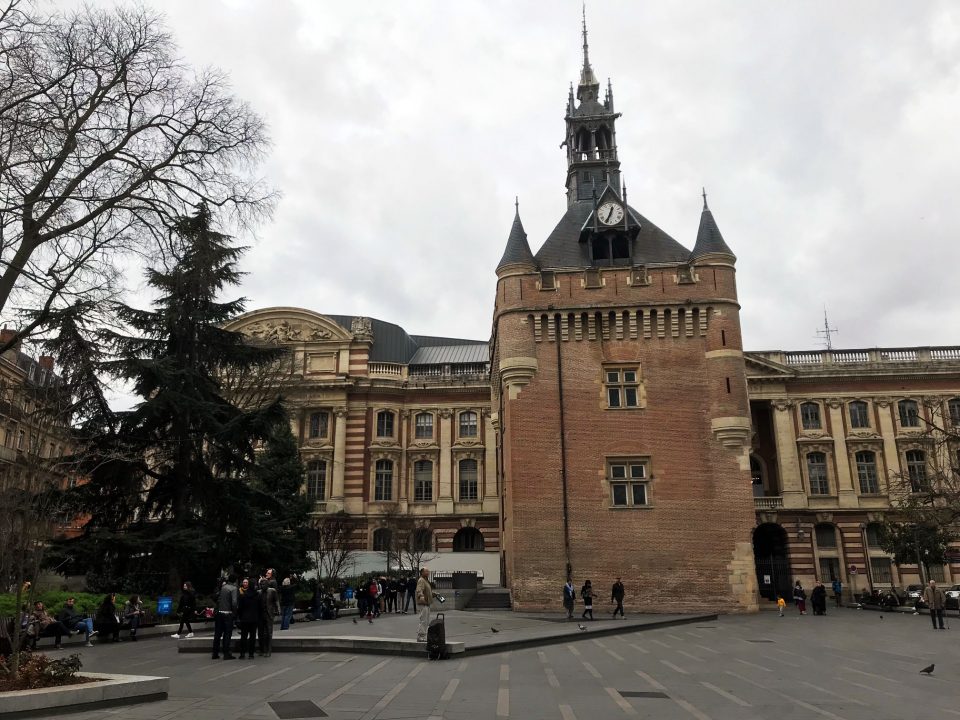 When you walk through the main shopping streets of Toulouse you will inevitably arrive at Charles-de-Gaulle Square. This public space is located between the Capitol de Toulouse (more on that later) and Rue Ernest Roscach.

This square is dominated by the Tour des Archives Capitulaires, which serves as a tourist information centre. The gardens on the square contain a fountain, a bust of Jean Jaurès and a plaque in memory of Charles-de-Gaulle. 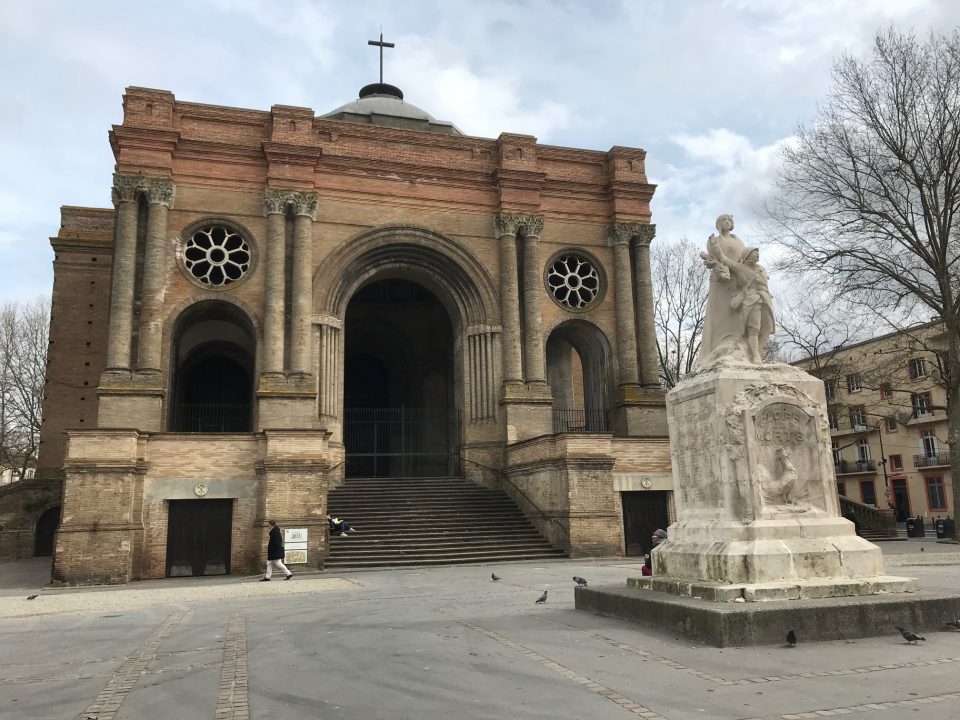 Only a short walk from Canal du Midi is St Aubin Church. This imposing church is the namesake of the Toulouse neighbourhood of St Aubin.

St Aubin Church was built on the grounds of a cemetery in 1847. Its architecture contains Gothic, Romanesque and Byzantine styles. 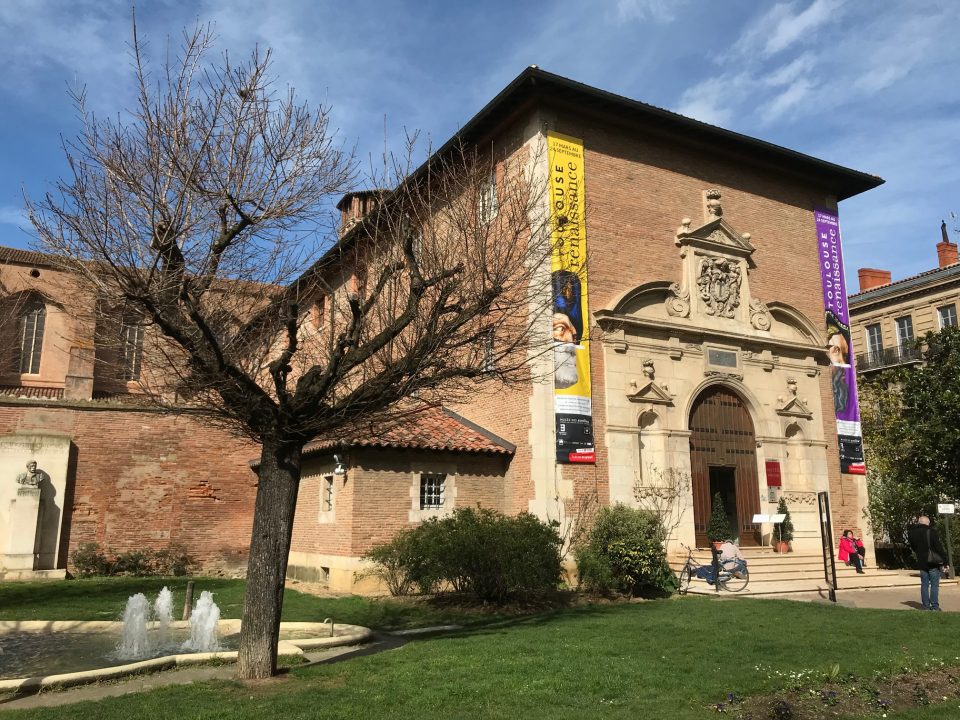 If you want to add some culture to your trip head down to Musée des Augustins de Toulouse, a fine arts museum. Its collection varies with paintings and sculpture from the Middle Ages to the early 20th century.

There are over 4,000 items in the collection including works from Delacroix, Ingres and Toulouse-Lautrec. In the centre of the museum is a 14th-century courtyard with salvaged gargoyle statues placed between the benches. 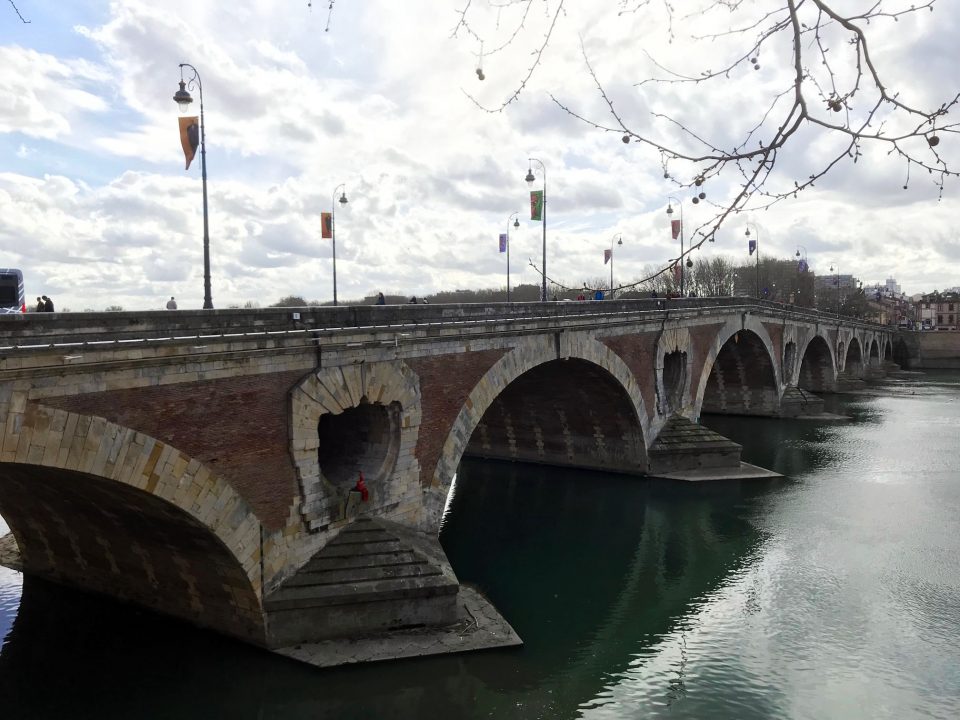 Head down to the banks of the River Garonne to see the remarkable Pont Neuf. A notable fact about this bridge is that construction started in the 16th century, but it took nearly 90 years to complete!

You may notice that Pont Neuf’s seven arches are not symmetrical which adds to its splendour. If you like a nice view, cross the bridge and appreciate the cityscape and river.

You should also try and spot the sculpture of a small devil underneath one of the arches!

Pont Neuf is obviously not to be confused with the bridge of the same name in Paris! 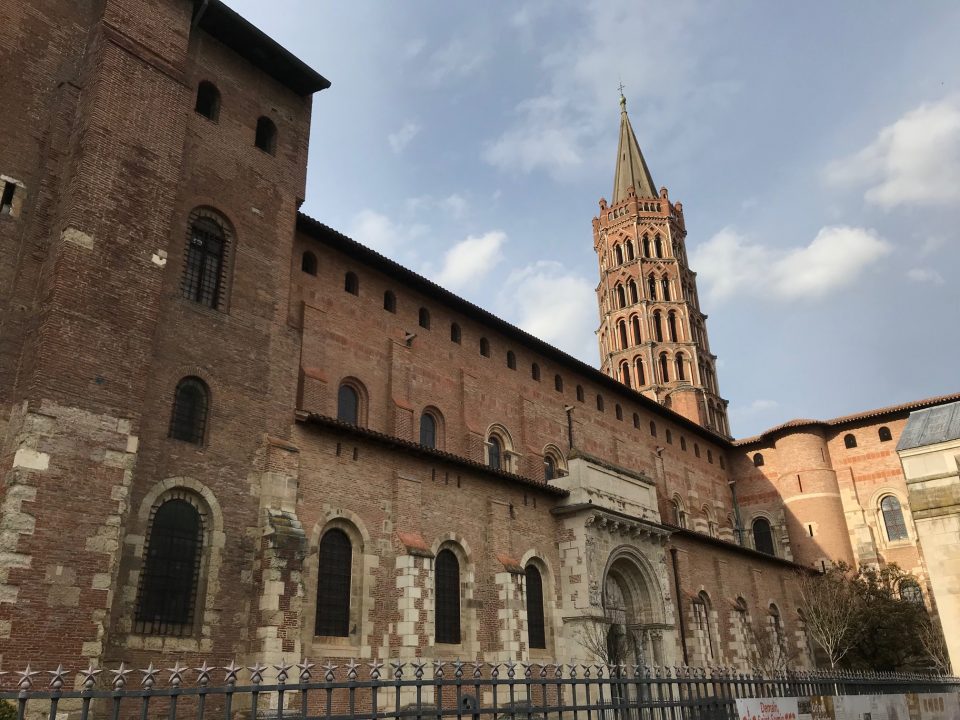 Without a doubt, one of the main attractions you should see in Toulouse is the Basilica of Saint-Sernin. It is a UNESCO World Heritage site and was built between 1080 and 1120. This church is the largest remaining Romanesque building left in Europe.

The bell tower of the church is a thing of beauty, the use of pink brick really adds a degree of warmth to it.

You can go inside the church for free to see its altars, sculptures and stained glass windows. Although a charge applies if you want to see the ambulatory. 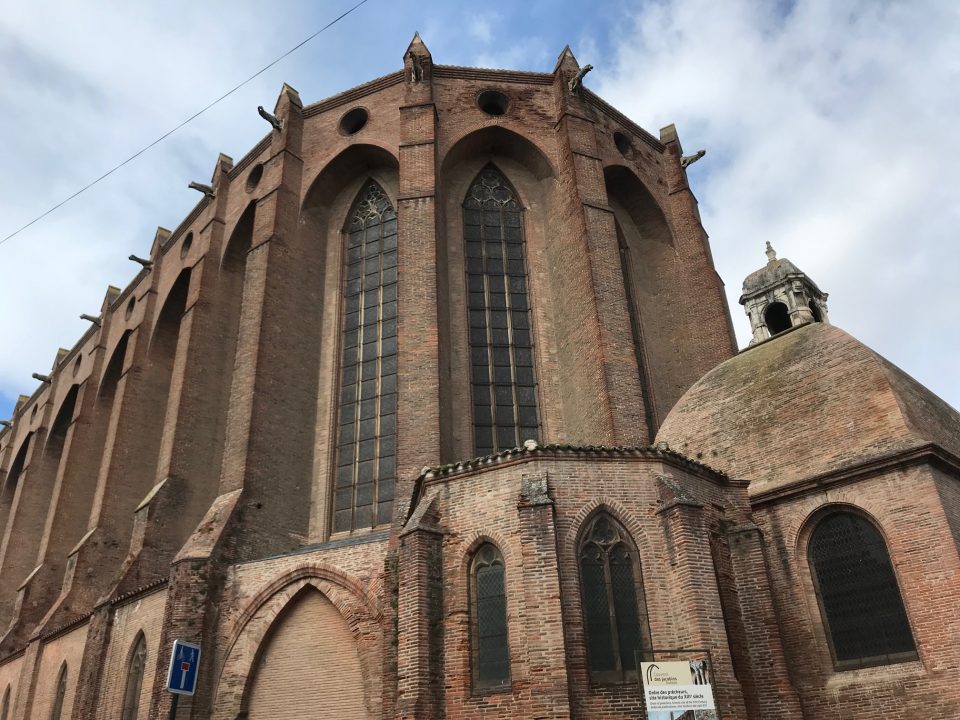 Another of Toulouse’s famous churches is the Church of Les Jacobins. It is a Roman Catholic church that was constructed in 1230.

The outside of the church is really impressive with its brickwork, gargoyles and distinctive tower. On our visit, the church was closed, so we couldn’t view the inside. 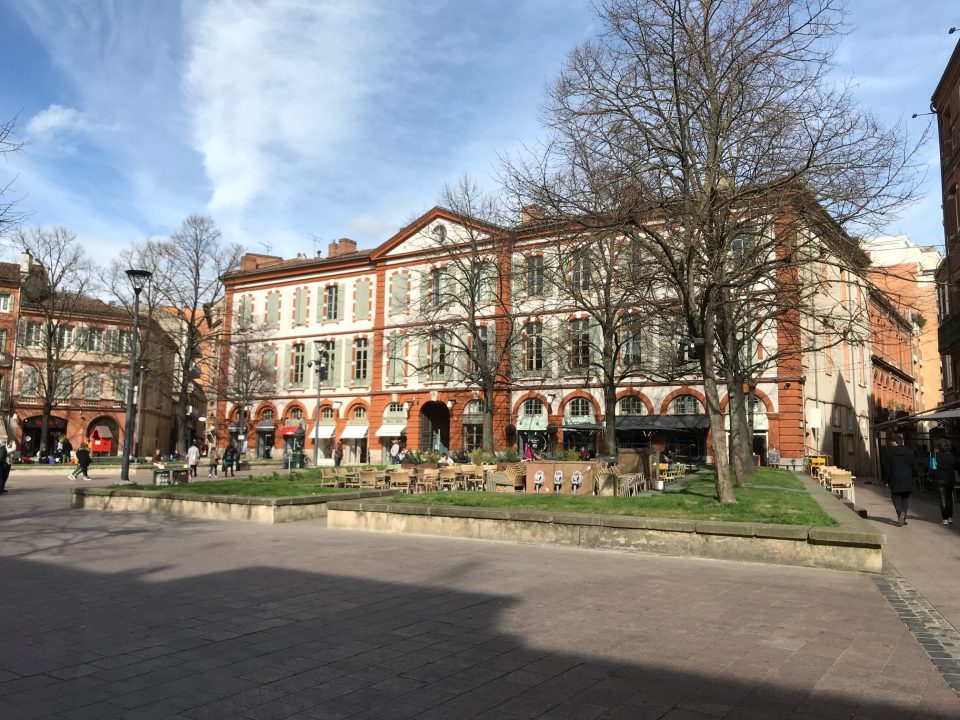 If you need a rest after some sightseeing head to Jardin Pierre Goudouli. These are small gardens and are named in memory of a local poet.

The gardens are an excellent place to watch the world go by. There’s a fountain in the centre, which coupled with a carousel adds to the garden’s charm. 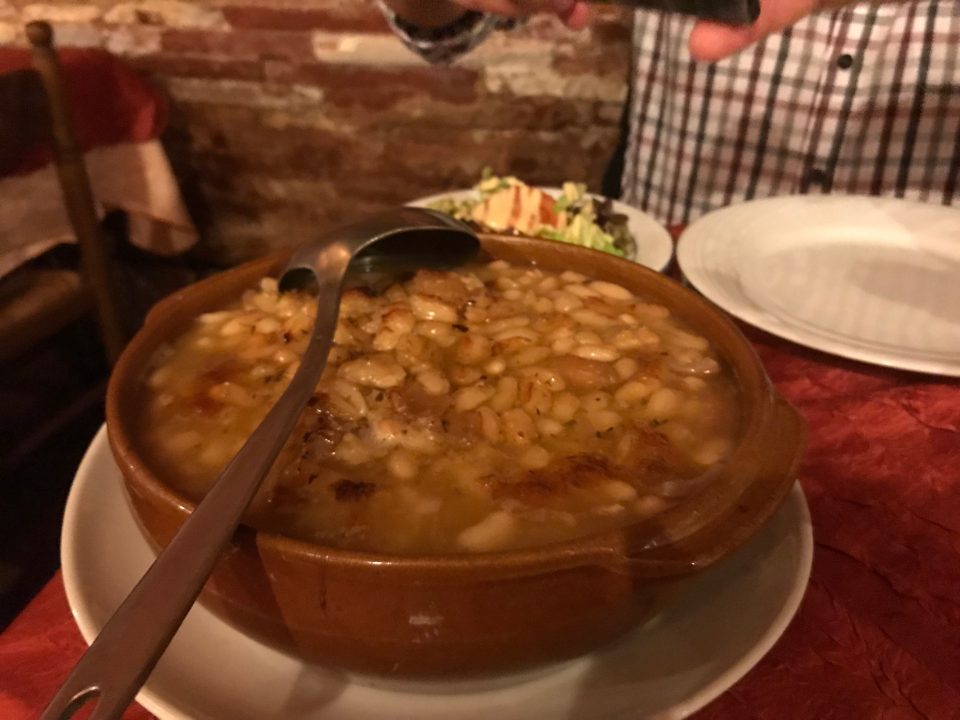 Eating out is always an important part of a successful city-break, so why not try the local cuisine?

Cassoulet is a delicacy of Toulouse. Its ingredients typically consist of sausages, goose, duck and white beans. There are a number of restaurants around the city offering this dish which is served in an earthenware pot with a side salad.

Although cassoulet is very tasty, it’s very rich and filling, so you probably won’t want to try it with a hangover! In other words, the author of this blog did just that! 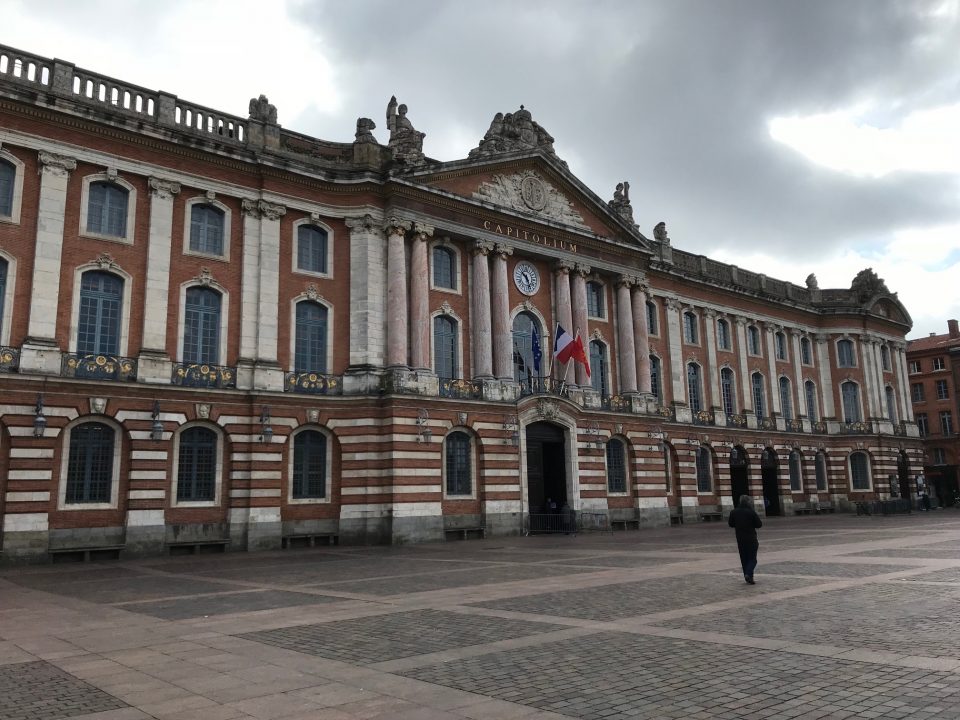 At the heart of the city of Toulouse is the Capitole. This large square houses the City Hall and a variety of cafes and restaurants.

As it is constructed out of the pink brick found throughout the city, Capitole de Toulouse sums up Toulouse perfectly.

Finally, did you enjoy this blog? Or if you have already been to Toulouse, have you got some other suggestions to share? Then remember to leave a comment.

2018-04-16
Previous Post: In Bilbao to see Azkuna Zentroa, Dona Casilda Park, San Mames Stadium and Taberna Danenak
Next Post: Exploring the village of Fyti and the countryside around Paphos, Cyprus