By: ynysforgan_jack
In: Berlin, City-break, Germany, Travel
With: 1 Comment

After a good night sleep apart from a bit of sleepwalking, it was off for a quick breakfast before our Berlin walking tour.

The selection in the breakfast buffet was excellent with cold meats and cheeses. But alas there was no black pudding.

With our nutritional supplements ingested we made the short walk over to Zoologischer Garten Station to meet our walking tour.

Insider Tours were the company we booked based on advice we have received from friends who had visited Berlin. In a nutshell it gives visitors to Berlin a whistle-stop tour of the main city centre attractions. 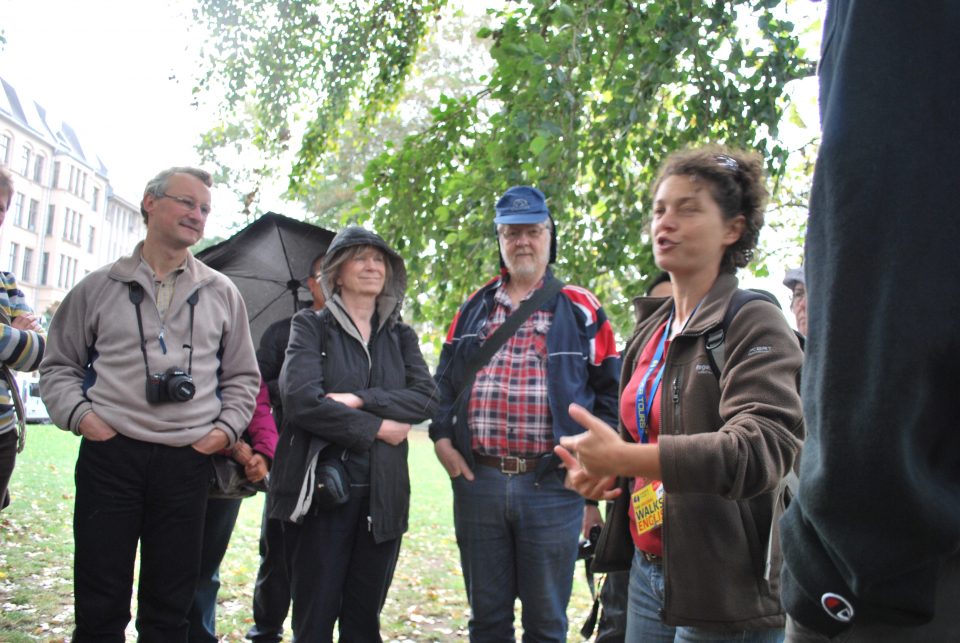 The first part of the tour involved getting onto the subway system to Hackescher Markt. From there we walked to a little park near the River Spree, where our guide Penelope gave us a condensed history of Germany. Also it gave us an opportunity to witness a meeting of the Berlin branch of the wildbunch complete with their shopping trolleys. 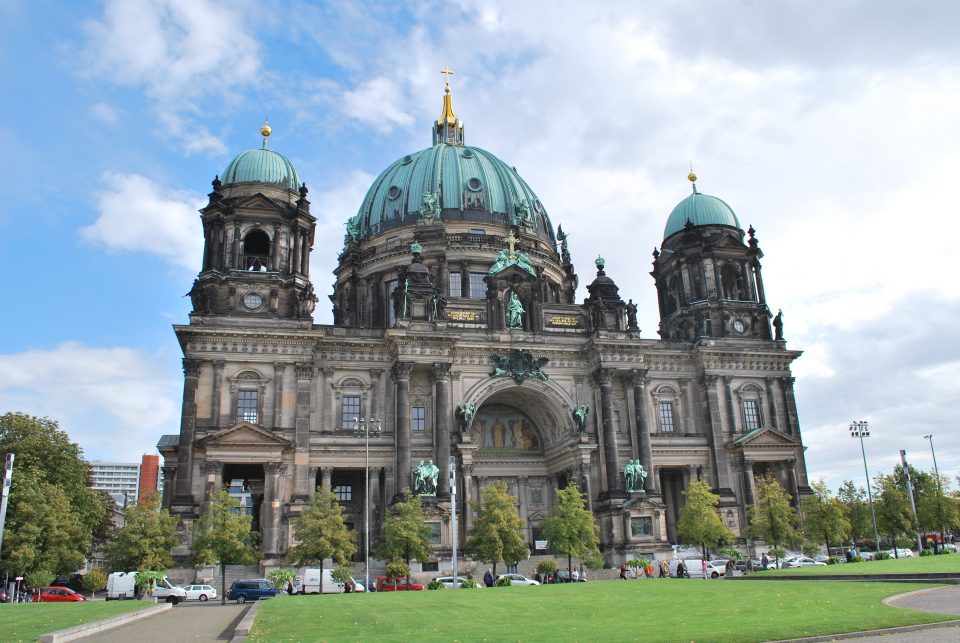 With the introductory talk over we made our way across the river to Berliner Dom and the Atles museum.

Berliner Dom or Berlin Cathedral was built in 1905 and apart from a place of worship, is also a museum and concert venue. 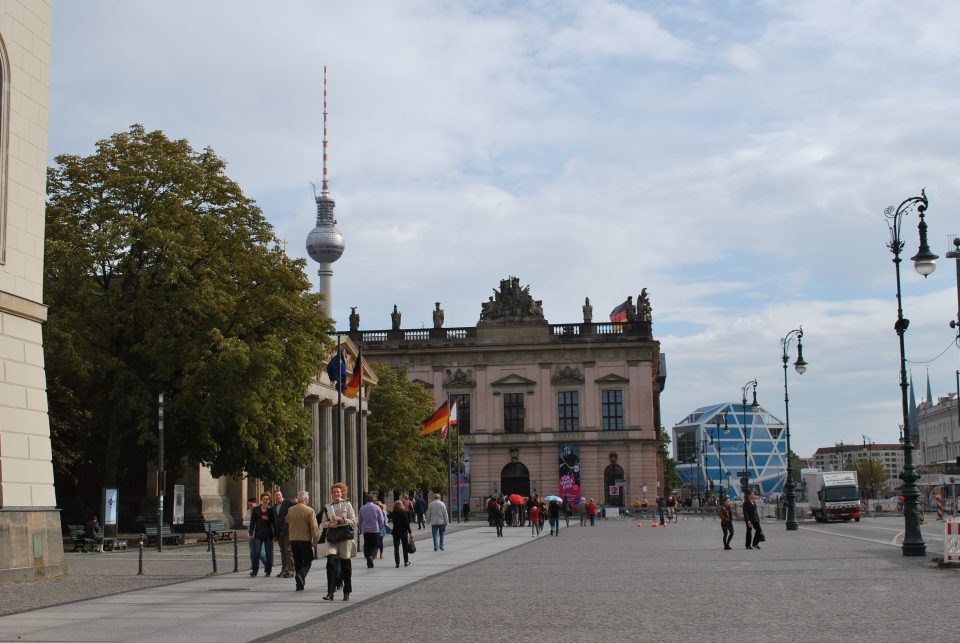 We then made the short walk down Unter Den Linden, which translates as under the linden tree. The first port of call on this grand boulevard was Neue Wache. This serves as a memorial for all who have died through war and tyranny. 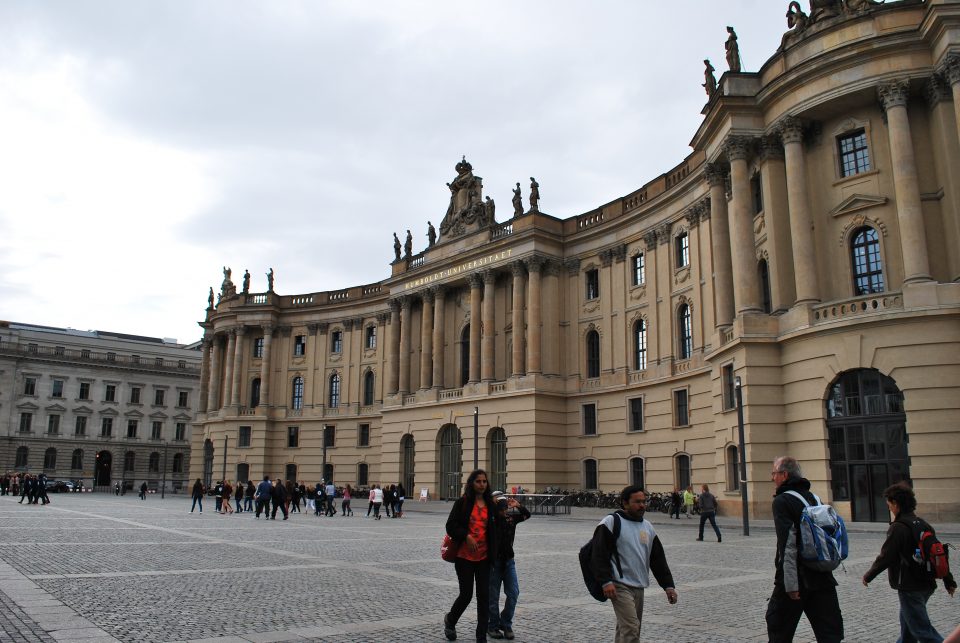 The second stop along Unter den Linden was Bebelplatz. A public square overlooked by Alte Bibliothek. Here there is a memorial to the 30,000 books destroyed during the book burning of the Nazi regime in 1933. 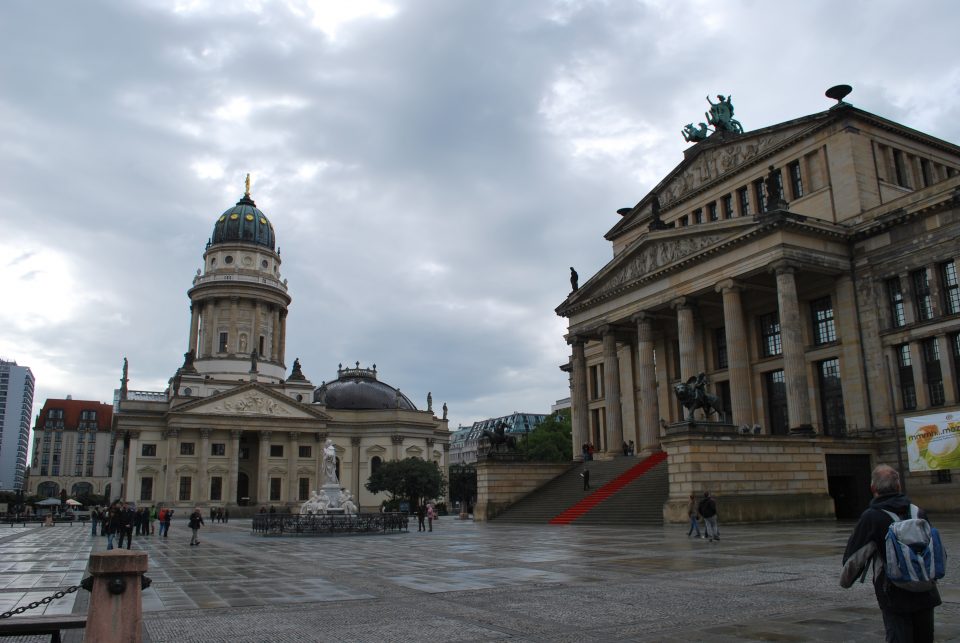 Our hardy tour group then battled through the rain showers to Gendarmenmarkt where two churches and Konzerthaus are located.

After a quick break in a coffee shop, we continued onto the second part of the tour. 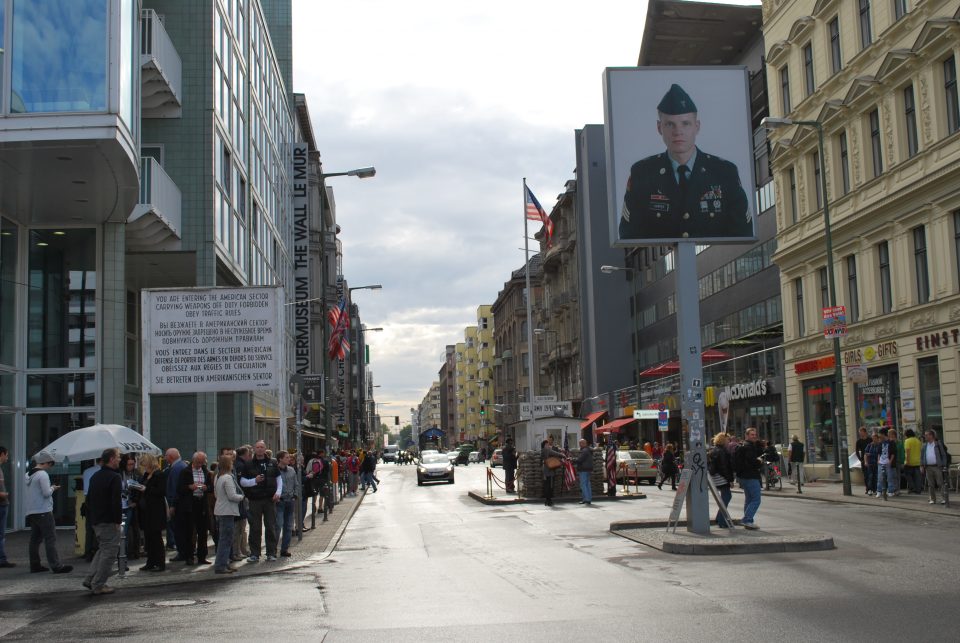 Next on the agenda was Checkpoint Charlie. During the Cold War this served as the main crossing point for the Allies and politicians between east and west Berlin. It’s slightly disappointing that the structure here is a reconstruction. Mock American soldiers pose for photos with visitors too.

Just down the road from Checkpoint Charlie, a small part of the Berlin Wall still stands. It was quite striking to see this infamous wall. It is ironic is that a fence has been erected in front of it, stopping people from damaging it. 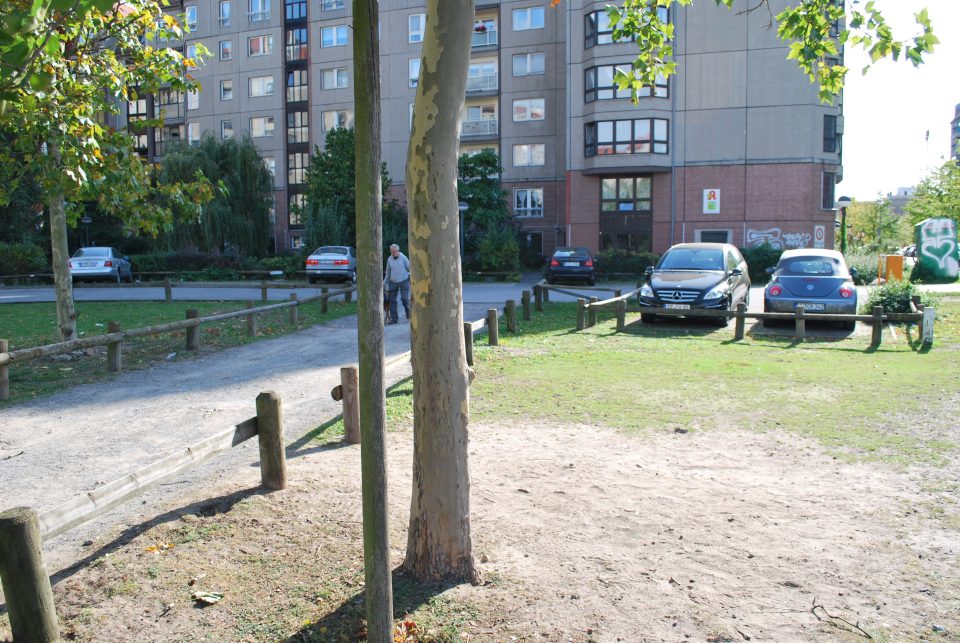 Our guide then led us to what she described as the most visited car park in the world. It turned out it was the location of Hitler’s bunker, where he spent his final days while the Soviets bombarded the city.

Memorial to the Murdered Jews of Europe 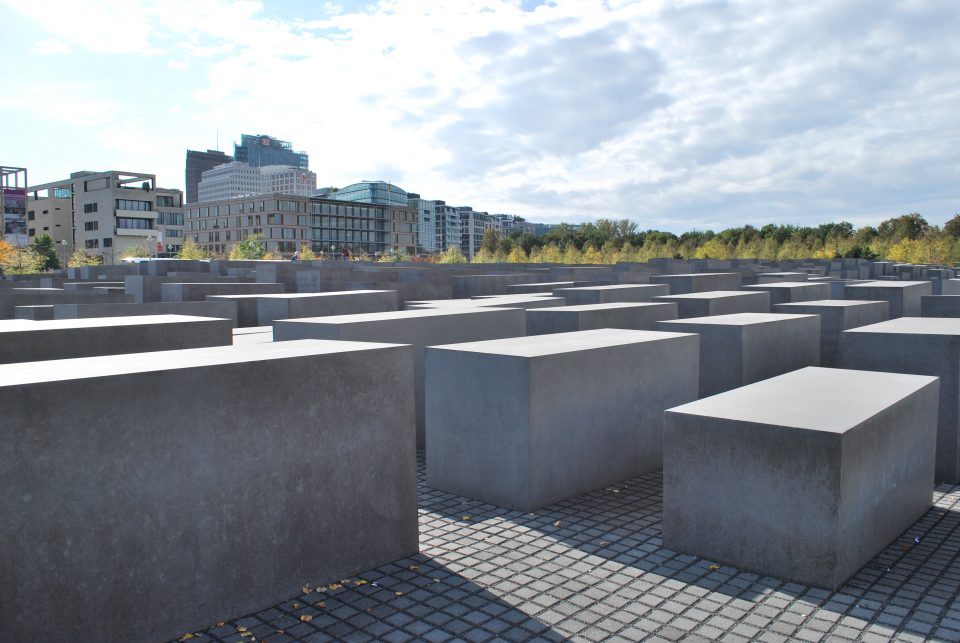 It was then time to visit the Memorial to the Murdered Jews of Europe. It was created in 2007 and consists of 2700 concrete columns rising from the ground. This was a very sombre experience and it’s frightening to think of the number of people who lost their lives. 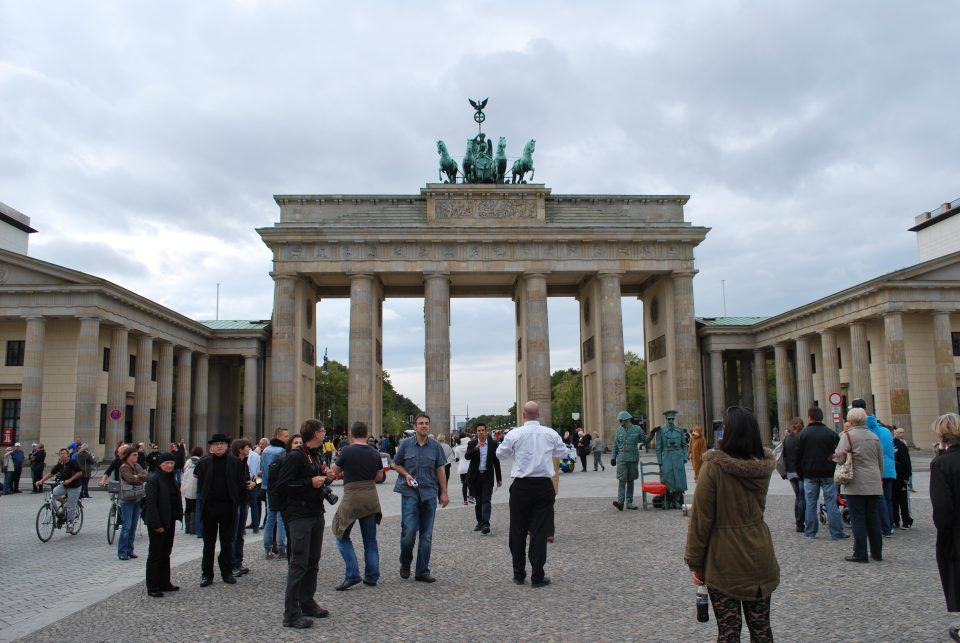 The final two stops were next. Firstly the Reichstag, home of the German Government and the Brandenburg Gate. It’s hard to believe that only 22 years ago the gate stood in no-man’s land between East and West Berlin.

What was even weirder was the fact that Yogi Bear and Darth Vader were posing for photos with tourists that were gathered around the gate.

It was at this point our walking tour ended and we had developed quite a thirst and appetite. 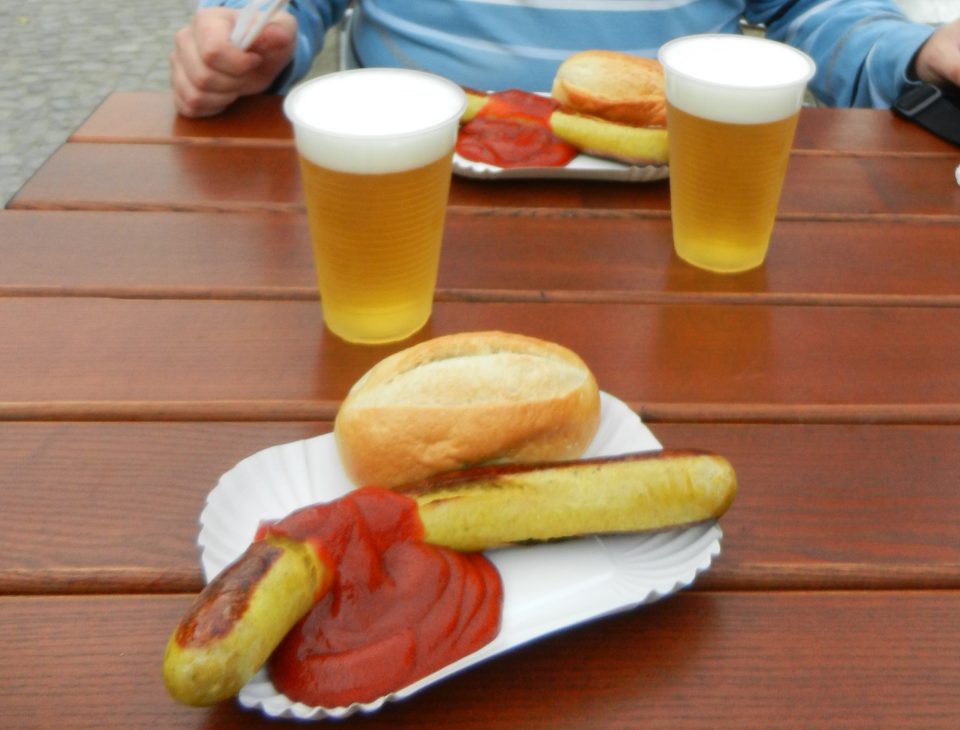 A friend had told me to try a currywurst during my trip to the Germany capital. So I located a kiosk near the Brandenburg gate and procured a currywurst and a beer.

I didn’t know what to expect from this curry tinged sausage but it was excellent. I intend to subject another to my digestive system before I leave the city.

After walking all over Berlin, for our evening meal we decided to go to a Vietnamese restaurant close to the hotel. I opted for half a litre of Warsteiner, wantons for starters and ginger chicken for main. The food was easily one of the best I’ve had.

2011-10-06
Previous Post: Travelling from Swansea to Berlin
Next Post: Visiting Potsdam on a day trip from Berlin