A day trip to Cascais and a Tagus River cruise

After seeing most of what Lisbon had to offer we decided to take a day trip to the nearby town of Cascais.

A Monday morning in Lisbon meant that the streets were full of commuters rather than tourists. Unfortunately the flea market along Avenida Da Liberdade had also vanished into thin air along with the ornaments of questionable taste.

After getting the metro to Cais do Sodré we tried to buy our tickets to Cascais. Our ticket procurement process was a complete mess.

Myself and Hayley bought single tickets. Mark and Becca did the same but ended up paying €1 extra. Al somehow bought unlimited travel until 2067. Only Jo managed to get the appropriate return.

The train to Cascais 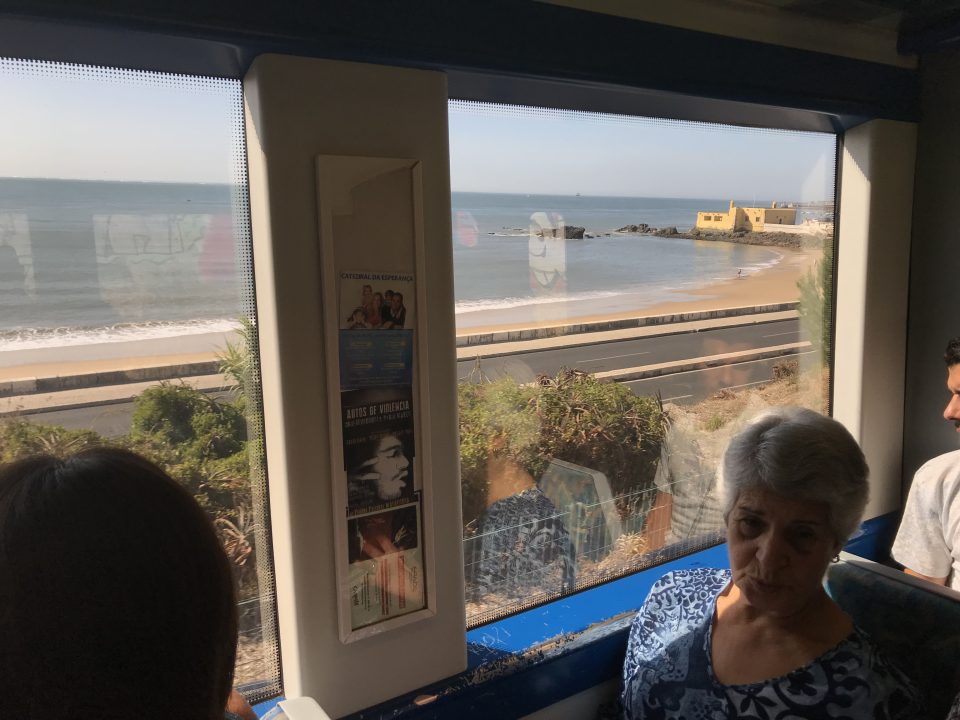 Once on board the train we travelled through Belem and then along the coastline. The scenery was beautiful even if it felt like the temperature on the train was set at gas mark 2. 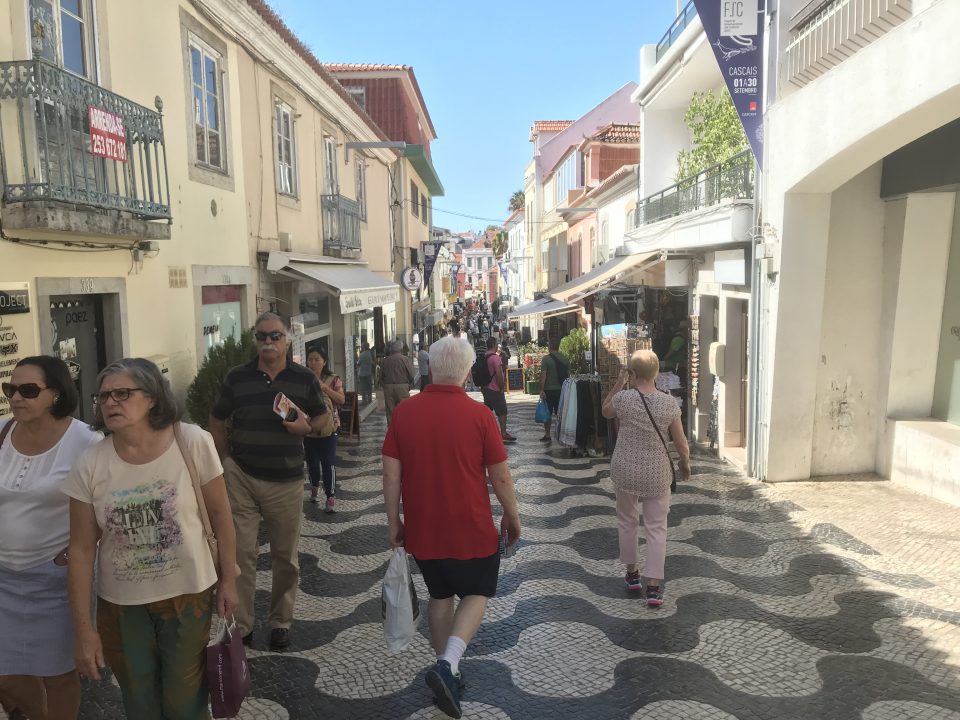 When we arrived in Cascais and had a quick look at the beach, we walked down Rua Frederico Arouca. This beautifully cobbled street is full of shops, bars and restaurants, some of which are housed in beautifully tiled buildings. 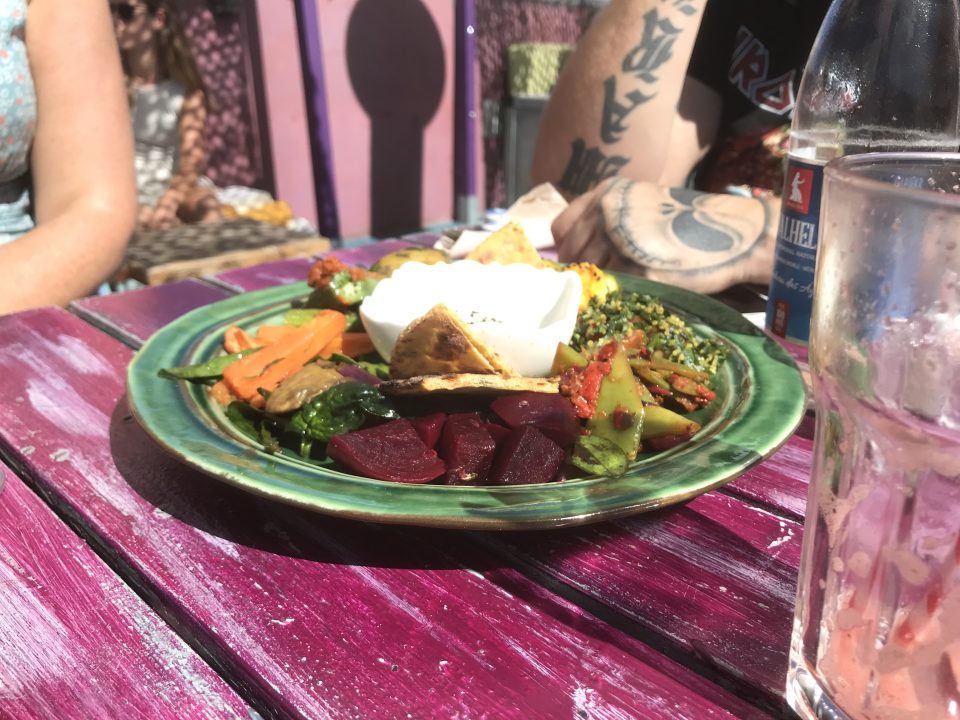 Jo had done some advance planning and found a vegetarian restaurant called House of Wonders.

We opted for two sharing plates per couple. We settled on the roof-top terrace with great anticipation.

The food here was spectacular especially when washed down with a local craft ale. I would definitely recommend this restaurant if you are in Cascais.

We then walked through the historic centre of Cascais to Praça 5 de Outubro. This square is the location of the Town Hall of Cascais and Paços do Conselho.

Opposite the square is Ribiera Beach. This attracted sunbathers, dogs and a naked fisherman alike. 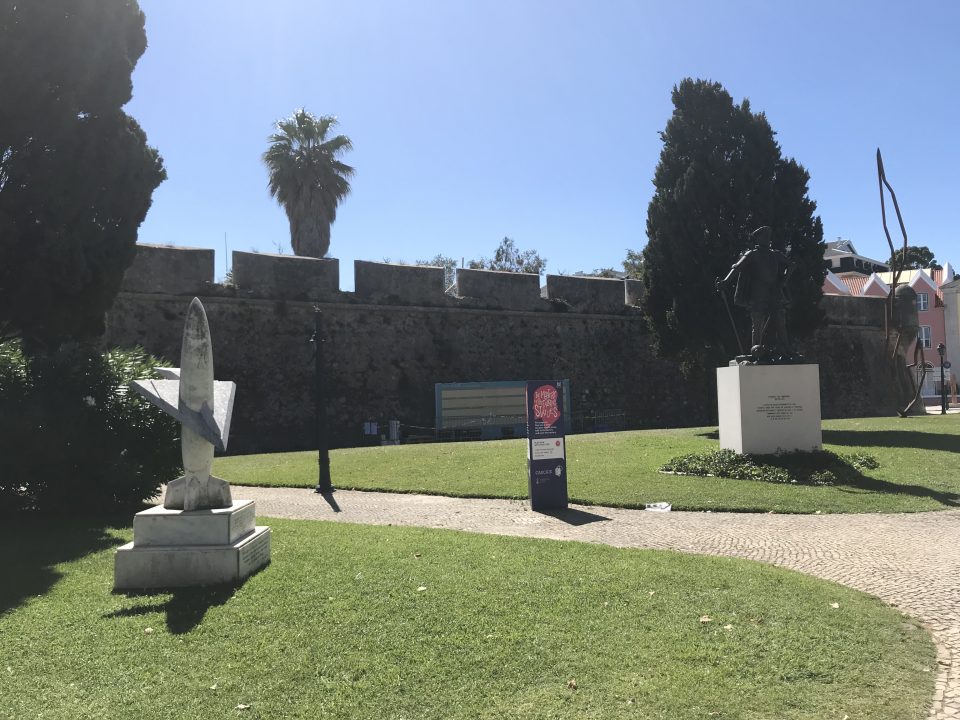 A short walk away is the Citadel of Cascais. It is a fortification built between the 15th and 17th centuries to defend Cascais and Lisbon.

Nowadays it’s transitioned into an art district with small galleries and public art. 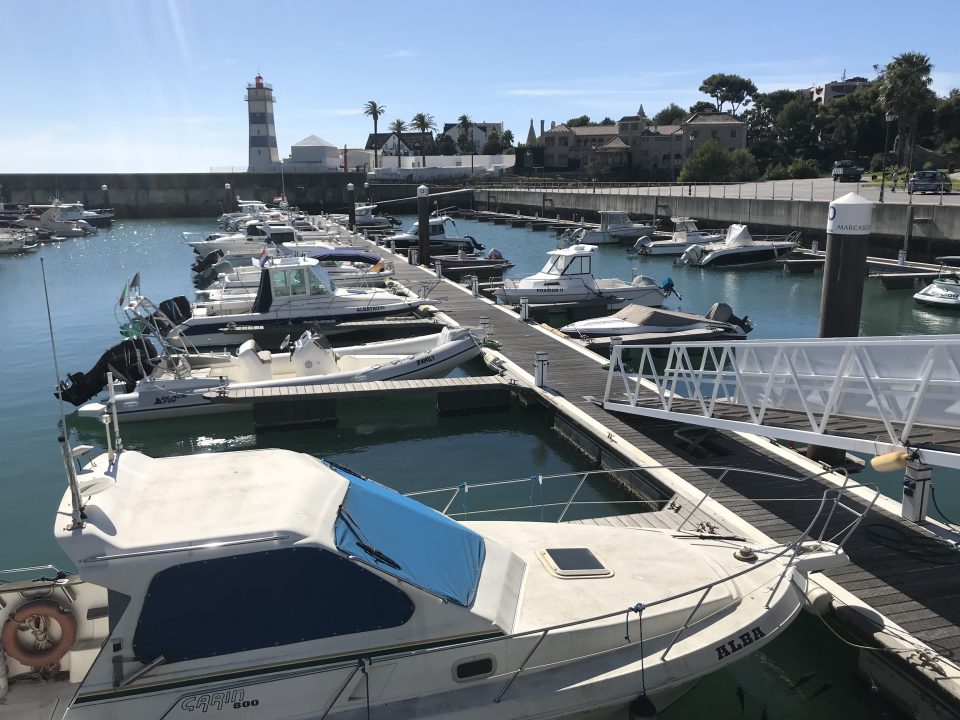 We arrived at Cascais Marina after walking past the Motor Passion Museum and the ‘tunnel of love’ – whatever that is.

The marina was constructed in 1999 and has over 650 boats. There are also an array of shops and cafes, one of which we had a beer in. Or if you are Hayley and Becca – a litre of sangria. 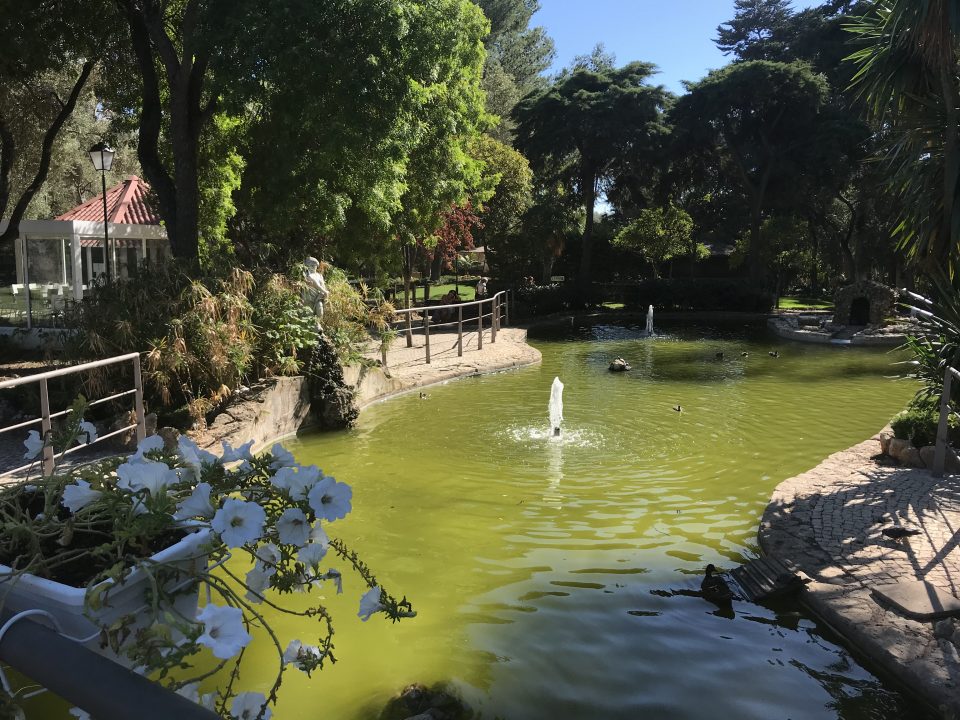 It was then onto the amazing scenery of Parque Marechal Carmona. This parkland is full of public art and some historical buildings. Surprisingly being a park one can also find trees and grassy areas.

There are also a variety of avians dwelling here including peacocks and cockerels. Mark avoided being mauled by a peacock, but failed to compare sizes with a cockerel. 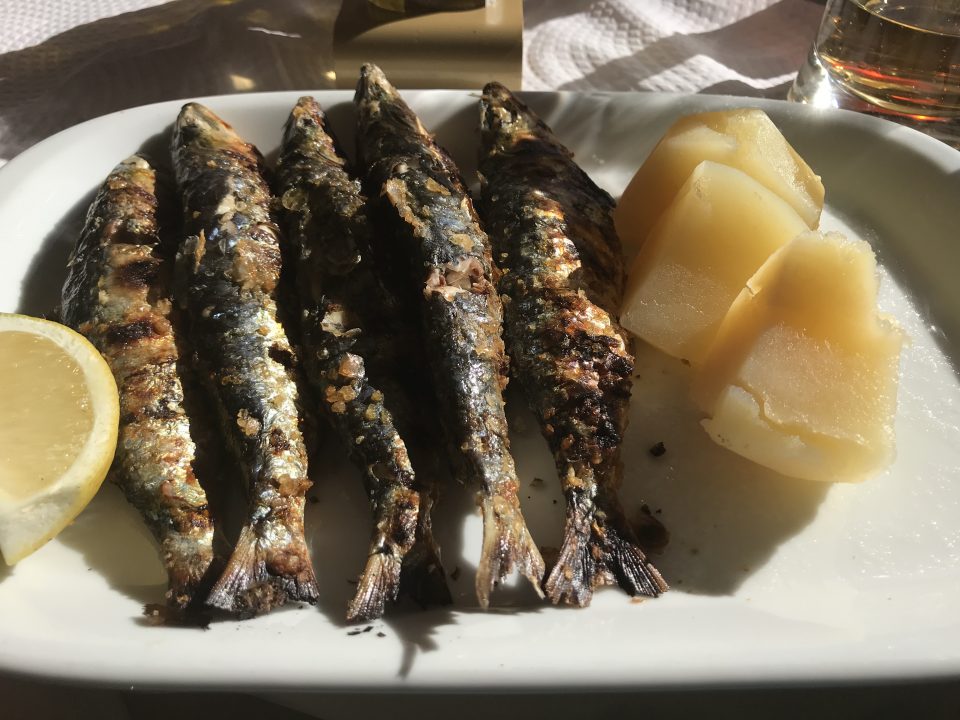 Before heading back into Lisbon I just had to get some grilled sardines. I found the opportunity in a restaurant called Jardim dos Frangos.

They were delicious to be fair and much cheaper than in the main part of town.

Once consumed and after settling the bill it was off back into Lisbon on the train. 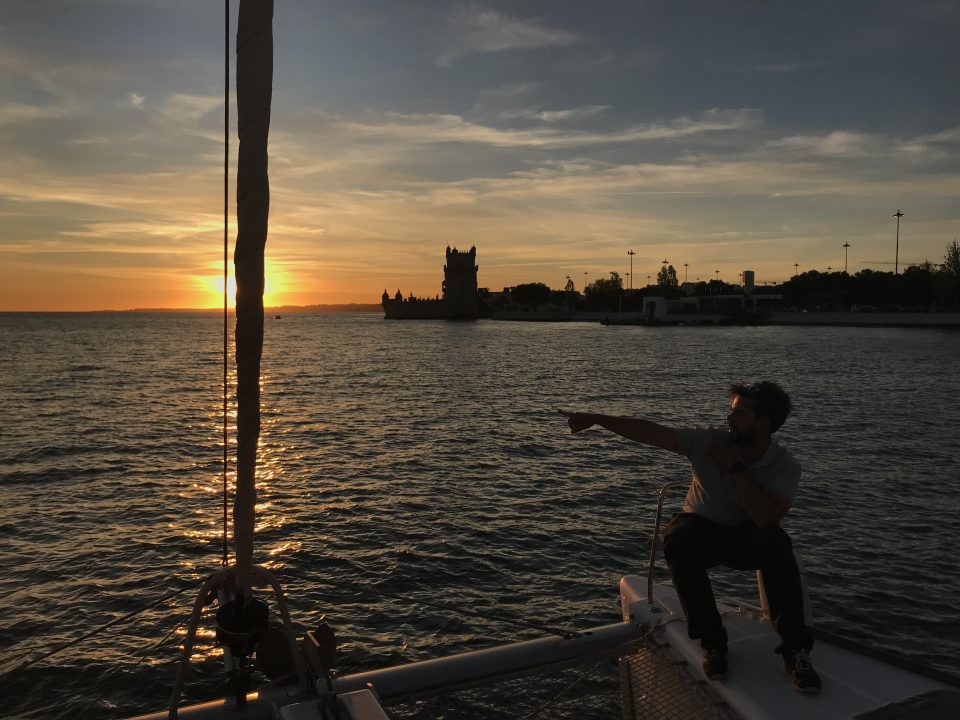 It was then time for our Tagus River cruise. The ship took us from Lisbon to Belem and back. We sipped on wine, enjoyed the sunset all while I conquered my fear of lying on a net above choppy water. It was a great way to end our day.