By: ynysforgan_jack
In: Lisbon, Portugal, Travel
With: 2 Comments

A busy day was in store for us in Lisbon as we set off to see a number of attractions such as Marquês de Pombal and Parque Eduardo VII. As well as the neighbourhoods of Rossio and Baixa.

After yesterday’s adventure in Belem and Bairro Alto we had a bit of a lie-in and a late breakfast.

Before heading to the neighbourhood of Baixa and Rossio we made a short walk up Avenida da Liberdade. Here we were passed by a number of classic cars all seeming to be in a convoy. Stating the obvious but it was clearly part of motoring event. 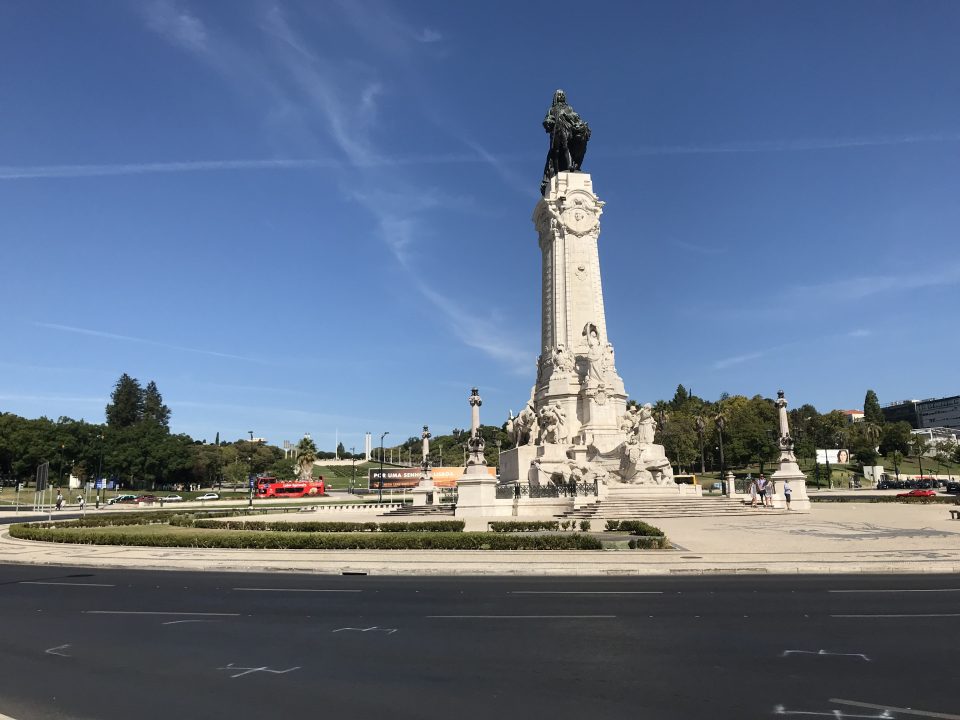 He was prime-minister from 1750 to 1777 and he oversaw the reconstruction of Lisbon after the earthquake of 1755. I don’t claim to have discovered this knowledge myself. I credit our taxi driver who told us on the way into Lisbon two days before. 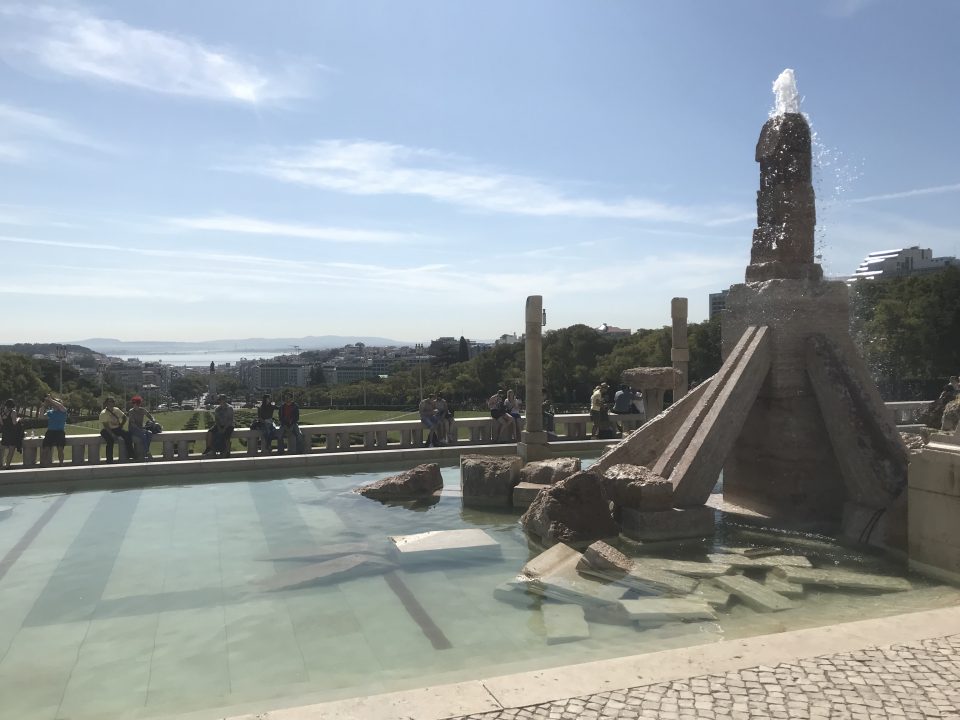 Opposite Marques de Pombal is Parque Eduardo VII. This hillside park is named in tribute to the UK’s Edward VII. He visited in 1903 to forge closer links to Portugal.

We made the steep walk up to the view point at the top of the park. Hayley did her best to fall over while making the ascent. She was adamant that this was nothing to do with her ‘alleged’ hangover.

At the top we were treated to amazing views of Lisbon. The giant Portuguese flag was not flying during our visit. Like yesterday’s trip to Belem, didn’t the responsible flag master know it was my wife’s birthday?

Instead Al decided that the naked flagpole should instead be renamed as the National Lightning Rod. 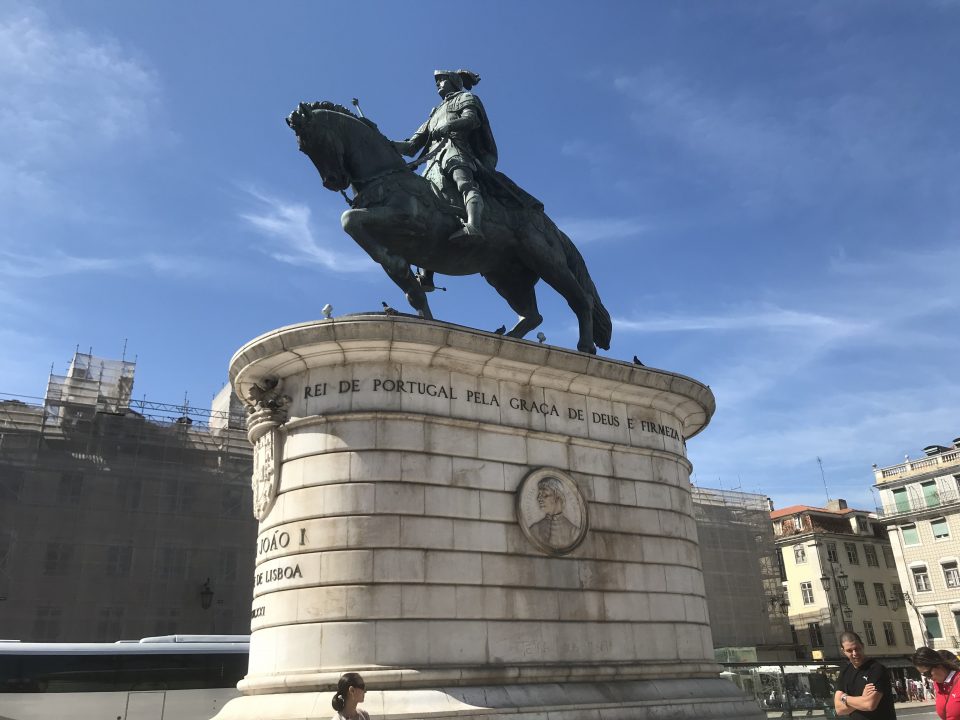 We got the tube from Parque station to Restadoures. After a quick coffee and a bacalhau we made our way to Rossio Square.

This square seemed to attract locals and tourists alike. In the centre is pedestal of Dom Pedro IV. There’s also a central fountain and the magnificent Rossio station.

Hayley now claimed that the wavy tiles on the floor were making her dizzy! Again nothing to do with her hangover. 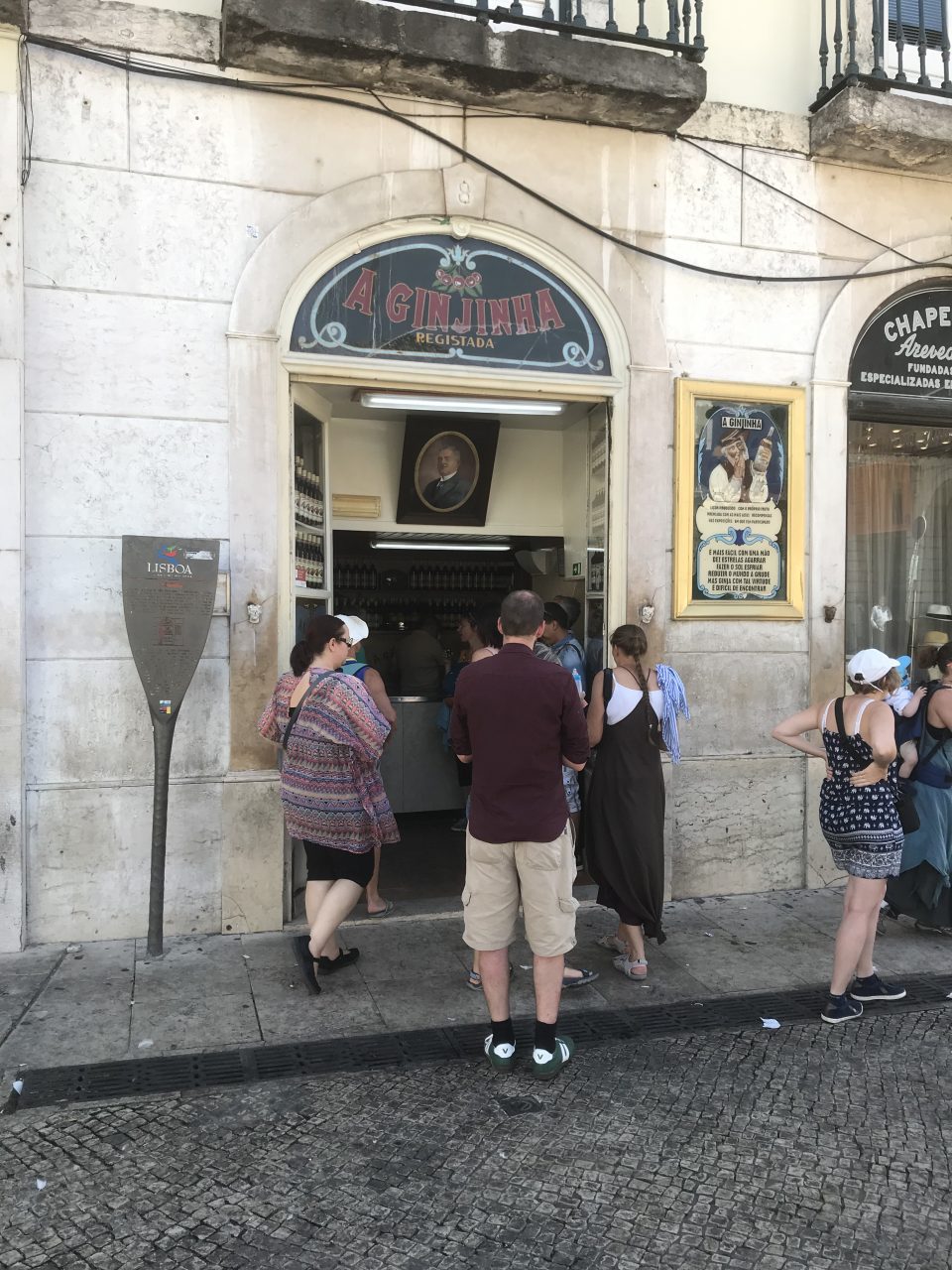 We made the short walk over from Rossio Square to ‘A Ginjinha’. This small premisis was the birthplace of the delightful ginjinha liquor. It’s basically cherries fermented in brandy with sugar and cinnamon. We just had to endulge. 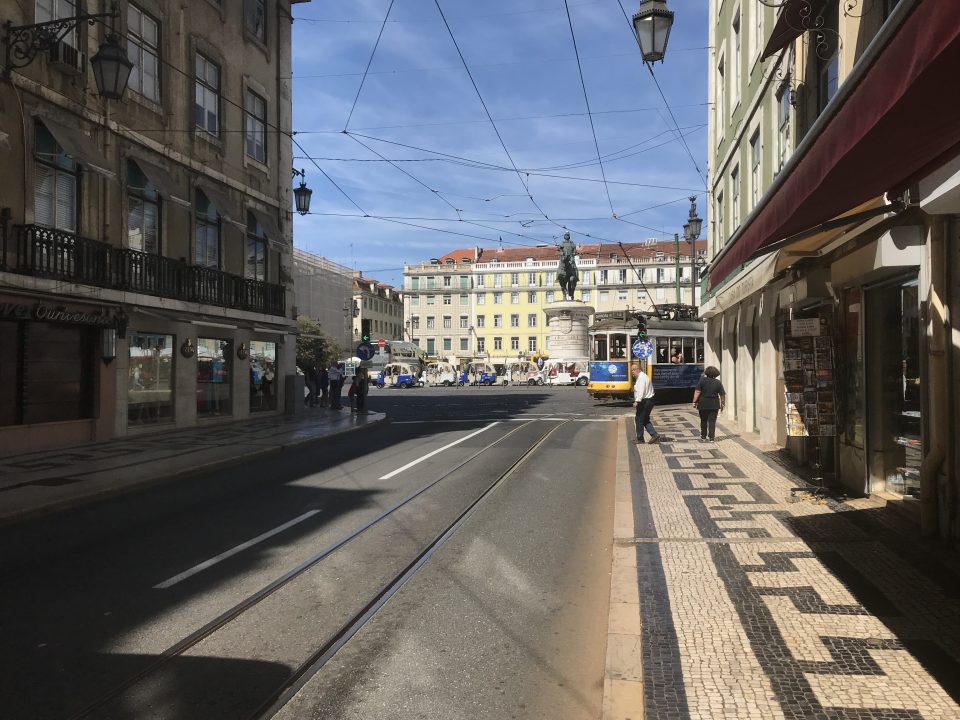 We then walked down to Praça da Figueira. This is a large square that was created after the 1755 earthquake. A small market was taking place here. Mark decided that this was a good time to subject some strong smelling cheese to his digestive system.

As it was time for a bit of lunch we stopped in a nearby restaurant called O Manalo. The food was ok but it was more memorable for the length of time it took for us to get the bill. It seemed like many centuries had passed by before it finally arrived. 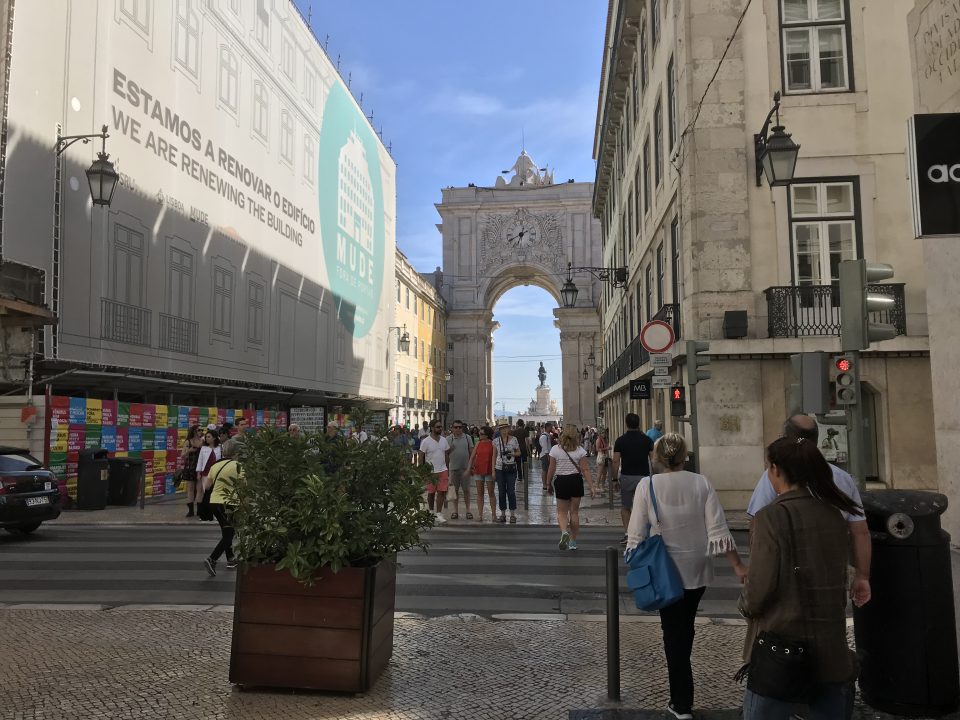 We then cut across to the main Baixa shopping street of Rua Augusta. Basically this street is full of cafes, shops and people. The prices are so much higher along here than they are elsewhere in Lisbon.

Just before we entered Praça do Comercio we were greeted by the Rua Augusta Arch. It’s an impressive stone arch which is decorated with statues of Portuguese historical figures. 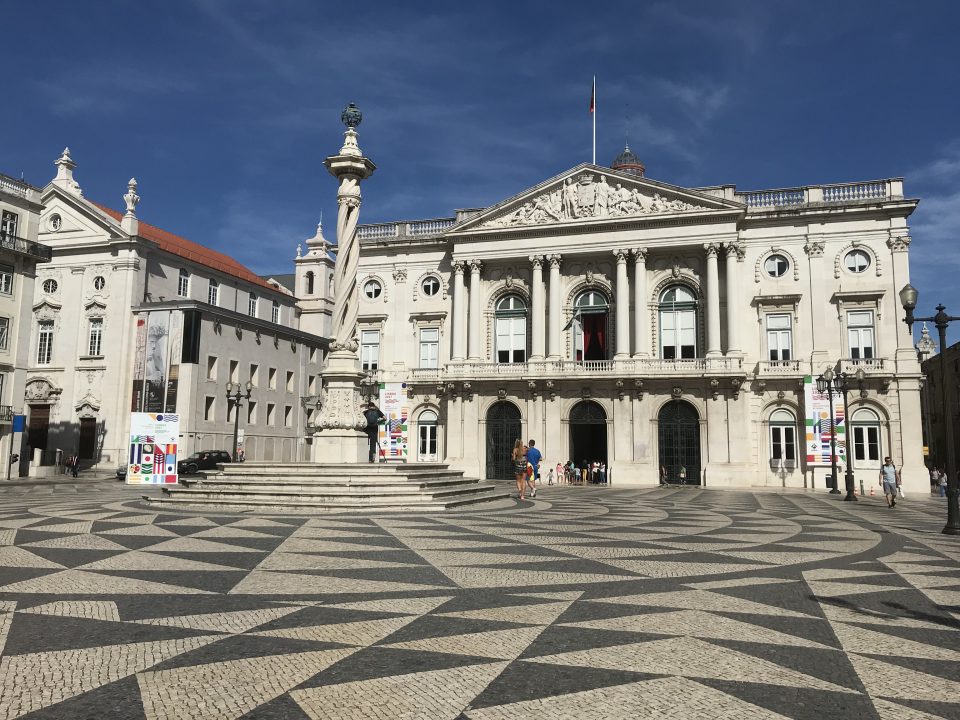 Our final stop of the day shift, before a well earned beer, was Praça do Municipio. This square is also known as the Town Hall Square. Like most of Lisbon the architecture here is tremendous.

There’s also some public art on display depicting some form of maroon coloured humans. Al, who was also sporting a maroon coloured t-shirt was hard to detect amongst these figures.

As we made our way back to the hotel the classic motor rally was still taking place along Avenida da Liberdade. So many cars were involved that you could taste and smell the emissions. 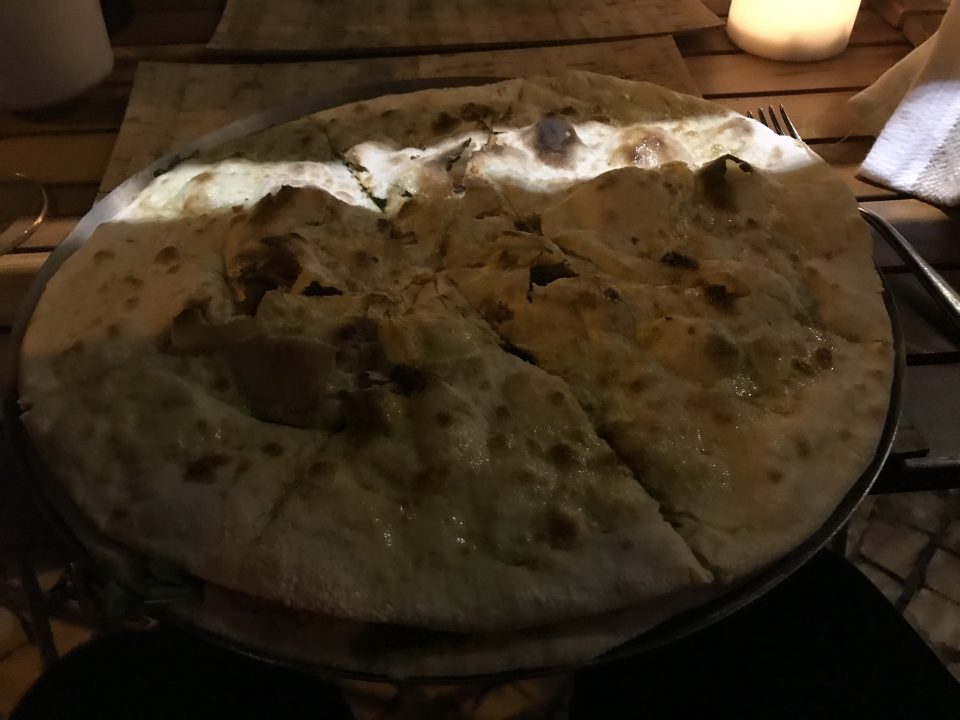 Our original intention was to eat in Time Out Market Lisboa. However it was so busy we couldn’t find a table for six. Instead we opted for Otto an Italian restaurant opposite.

We were able to get a table for six outside and the wine and food were amazing. Particularly the chocolate salami cake which Al said went down particularly well.

2017-09-24
Previous Post: Visiting the famous Lisbon district of Belem
Next Post: A day trip to Cascais and a Tagus River cruise