Going to Bratislava on a day trip? Here’s some cool stuff you can see

Are you visiting Bratislava on a day trip? Or maybe your time in the Slovak capital is limited? Don’t worry the city is quite compact so there should be enough time for you to see most of the main attractions.

Our visit to Bratislava was on a day trip from Vienna. We arrived on the Twin City Liner which connects the two cities on the Danube.

We knew that we had lots of things to see and only a short amount of time to cram it all in.

As it turned out we didn’t need to hurry as we managed to see quite a bit. We hope that by sharing this blog about our day in Bratislava that you too can get the most out of your visit. 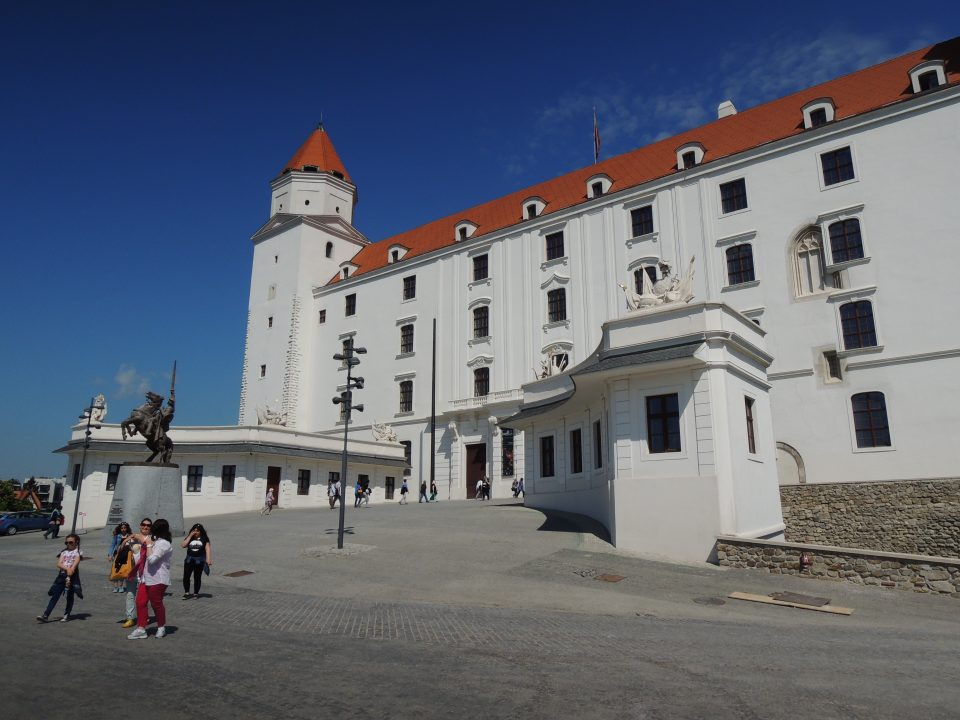 Firstly we made the uphill trek to Bratislava Castle. This four towered castle can be seen from all over Bratislava. We really enjoyed the views of the city from the castle. The city’s skyline also gave us a little preview of what to expect during our day. 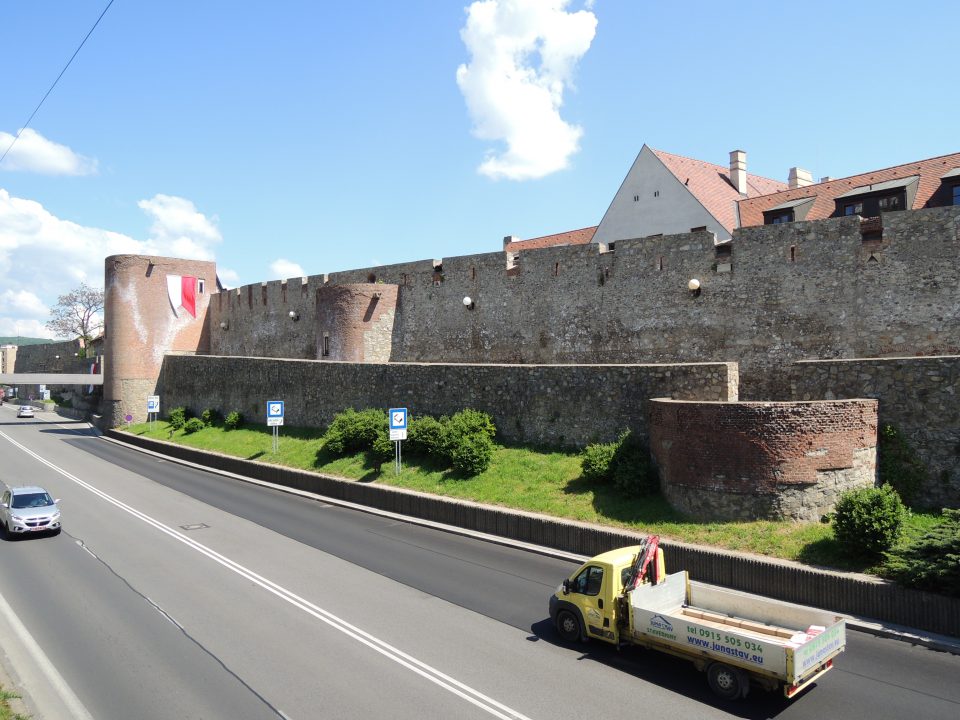 After walking down the hill from the castle we came to the last surviving section of Bratislava’s medieval city walls. The rest of the walls were torn down in the 18th and 19th centuries to allow for the expansion of the city.

We were able stroll along this small stretch of wall towards our next destination. 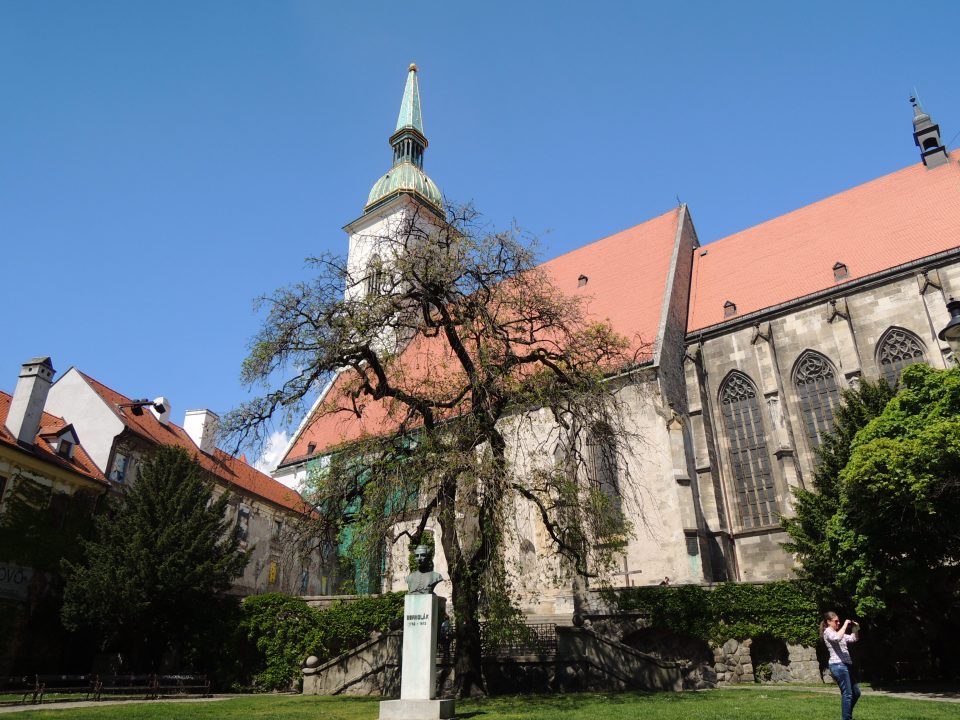 After walking along the city walls we came to St. Martin’s Cathedral. The cathedral is without a doubt a jewel in Bratislava’s crown. Its exterior really dominates over the neighbouring buildings.

We thought that the interior with its stained glass windows and frescoes was just as stunning as the outside. 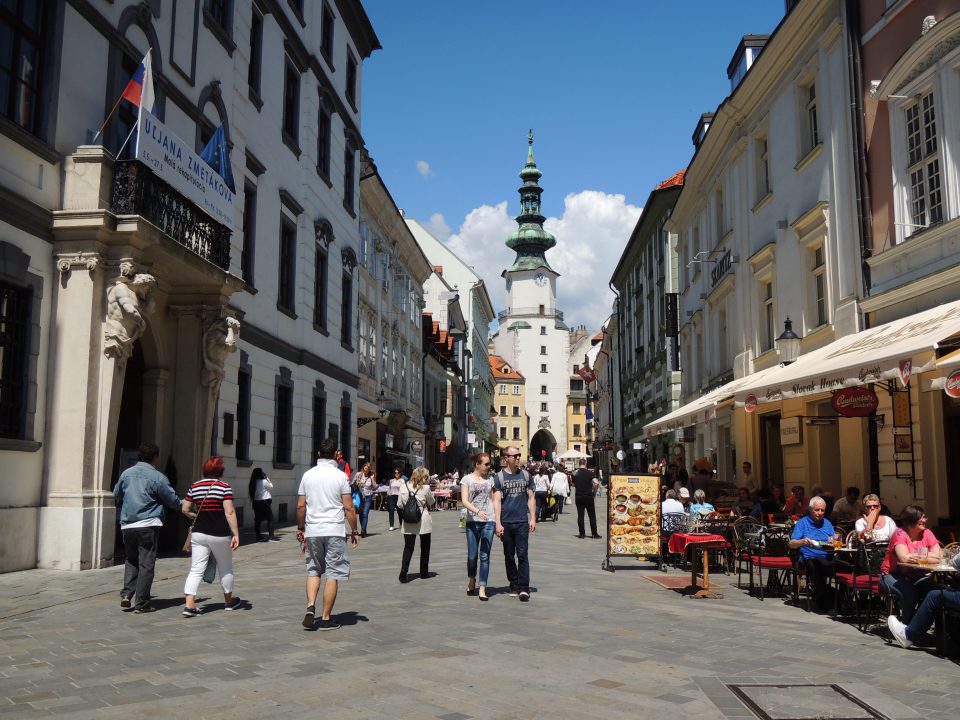 From the cathedral we walked into the old town of Bratislava. We couldn’t really miss Michael’s Gate, one of the old entrances to the city. This gate was built in the 13th Century and is now home to the Museum of Arms.

Some visitors were clearly appreciating the views from the gate’s sixth floor balcony. 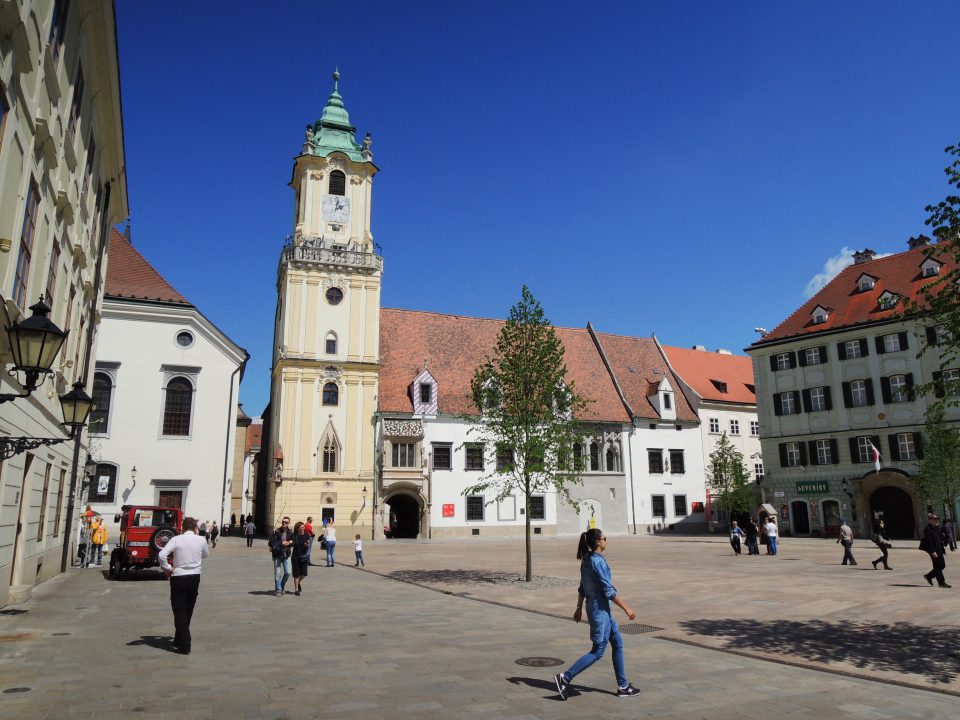 Bratislava’s main square was our next port of call. Known locally as Hlavné námestie, the square is considered to be the centre of Bratislava.

We saw some of the city’s main landmarks here including the Palace of the Hungarian Exchange Bank, the Roland Fountain, Palugyay Palace and most notably the next site on our list. 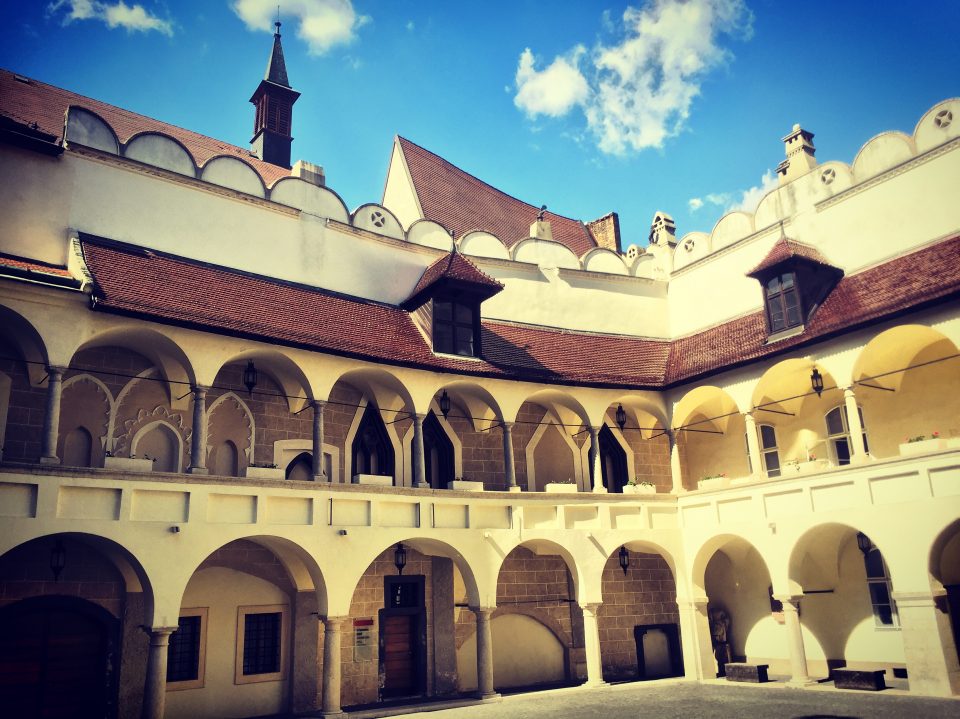 The Old Town Hall faces the main square and dates back to the 15th century, making it one of the oldest Town Halls in Slovakia.

We loved the inner courtyard with its arches of varying sizes. It was also intresting to see how steep the red-tiled roof was! 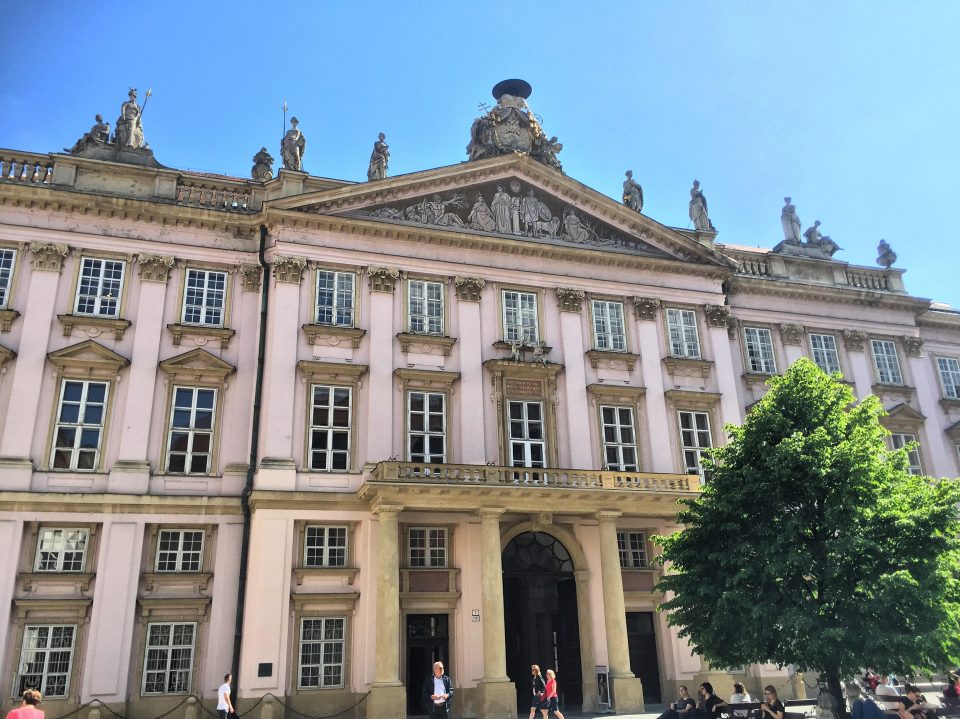 After leaving the Old Town Hall we arrived at the Primate’s Palace. It’s home to the Hall of Mirrors and not to an ape as the word primate may suggest!

The exterior of the palace is attractive and pink in colour. We entered the palace courtyard to see a statue of St. George battling a three-headed dragon. 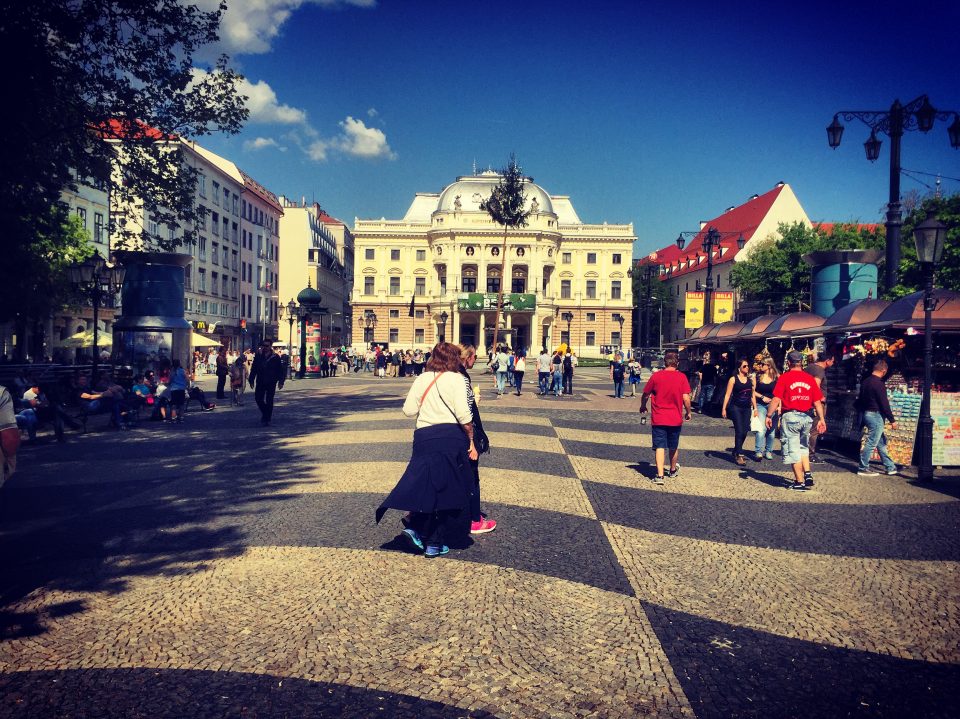 The Slovak National Theatre is yet another example of Bratislava’s wonderful buildings. It is the oldest professional theatre in the country. Unfortunately we didn’t have the opportunity to watch a performance. Nor for me to sing as only a tone deaf man in his early thirties can. 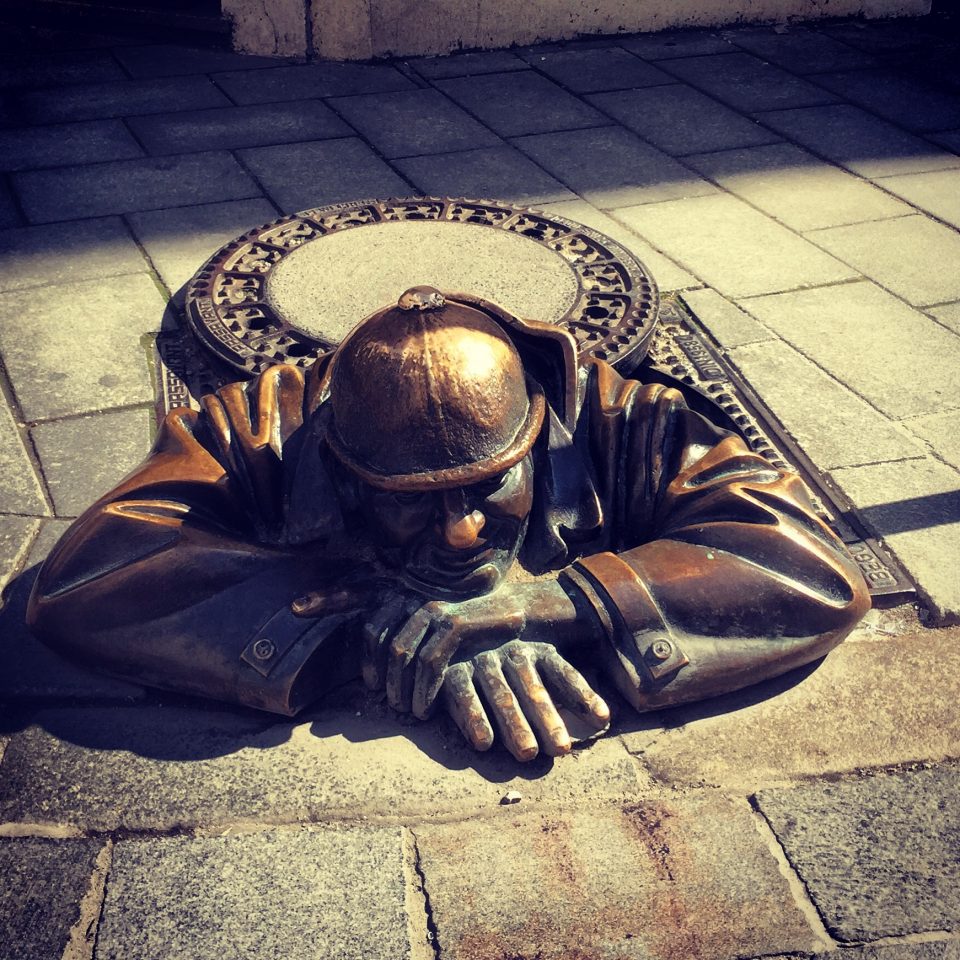 Dotted around Bratislava’s old town are many quirky statues and sculptures. Our favourites were Cumil, Schoner Naci and Napoleon’s Army Soldier. 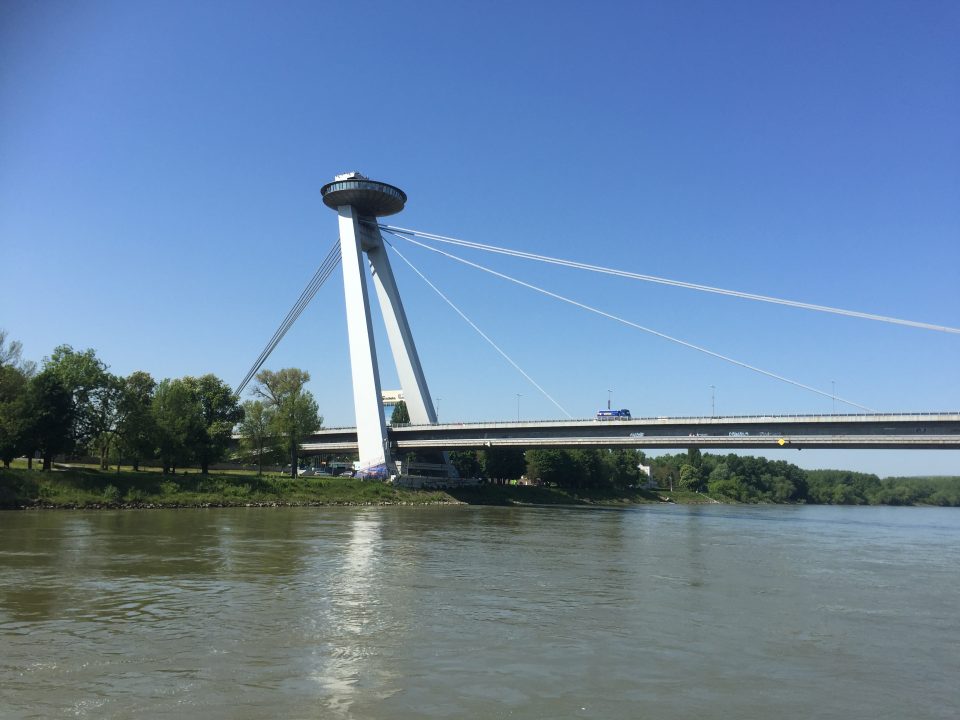 Our final stop before heading back to Vienna was to walk along the Danube to get a better view of Most SNP. It’s more famously known as the UFO Bridge and is 84.6m high. There are no extra-terrestrials at the top though, only a restaurant!

We then boarded the Twin City Liner back to Vienna. All safe in the knowledge that we’d seen a lot of what Bratislava has to offer. We’ll definitely head back one day to explore the city in greater detail.