We had a full day of activity planned as we made our way from Prince George, British Columbia to Jasper, Alberta. Along the way, we visited McBride, Mount Terry Fox, Mount Robson Provincial Park, Moose Lake and Athabasca Falls.

Our journey yesterday from Smithers to Prince George, BC was not the most entertaining, but we were hoping for much better as we set off in the car today.

There was barely a cloud in the sky as we left Prince George.

Goat River and invasion of mosquitoes 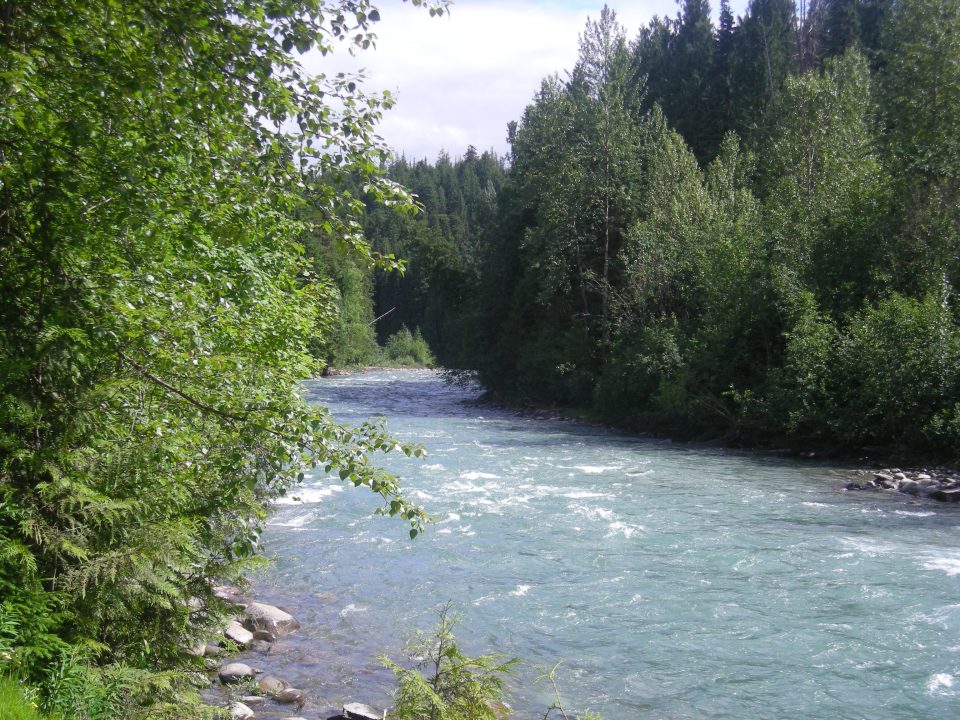 About an hour into a journey we could see the landscape start to change, becoming far more striking.

At one point we pulled over to take a photo of Goat River. While I was taking photos I heard a few screams and saw my group quickly retreating to the car. I then realised was the fuss was about – a swarm of thirsty mosquitoes were descending upon us.

I too ran back to the car where we dispensed of the vampiric beasts that had followed us inside. 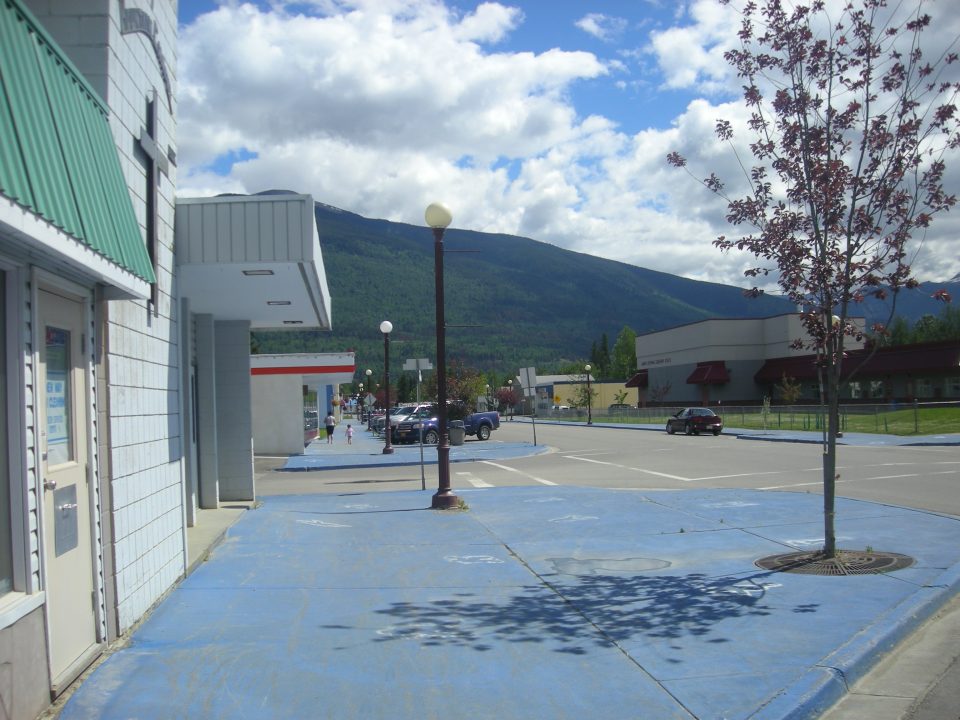 It was only a 30-minute drive from Goat River to McBride, BC.

Founded in 1913, McBride was Mile 90 of the Grand Trunk Pacific Railway. We had a quick walk around the village and had a coffee.

With all the pavements painted deep blue, McBride is certainly unique! 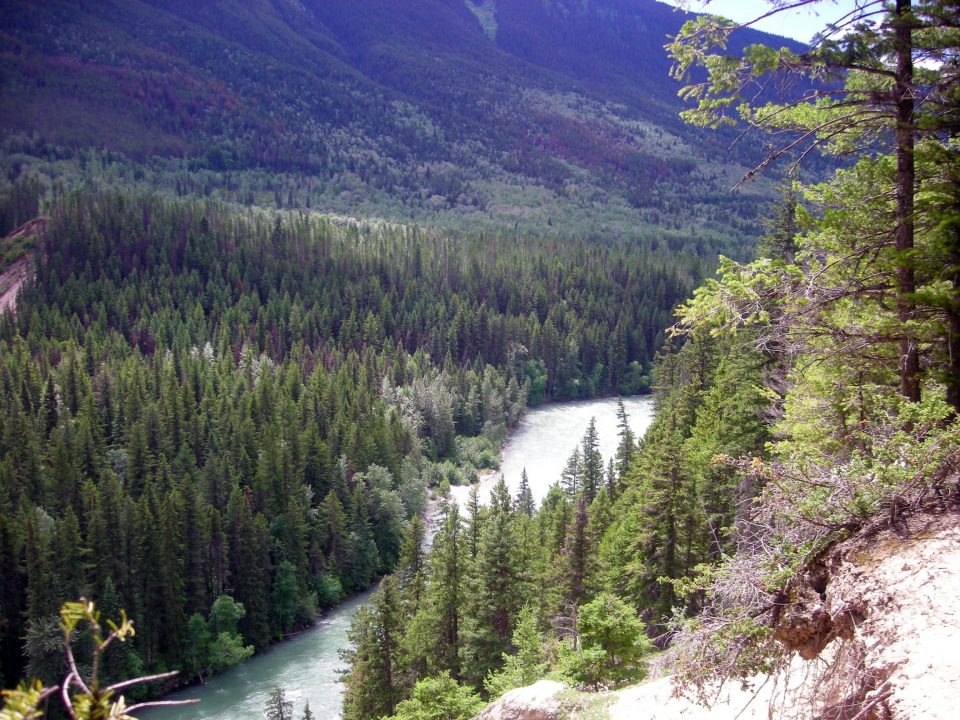 Leaving McBride we continued our journey towards Jasper, Alberta on the Yellowhead Highway.

Our next stop was at Mount Terry Fox. This mountain is named in honour of Terry Fox, who despite having his leg amputated as a result of bone cancer, bravely attempted an east to west Canada run to raise money for cancer research.

Unfortunately, the cancer spread to his lungs and Terry Fox was forced to stop his run after 143 days and nearly 5,400 kilometres.

His legacy continues to this day with the annual Terry Fox Run. What an inspiration! 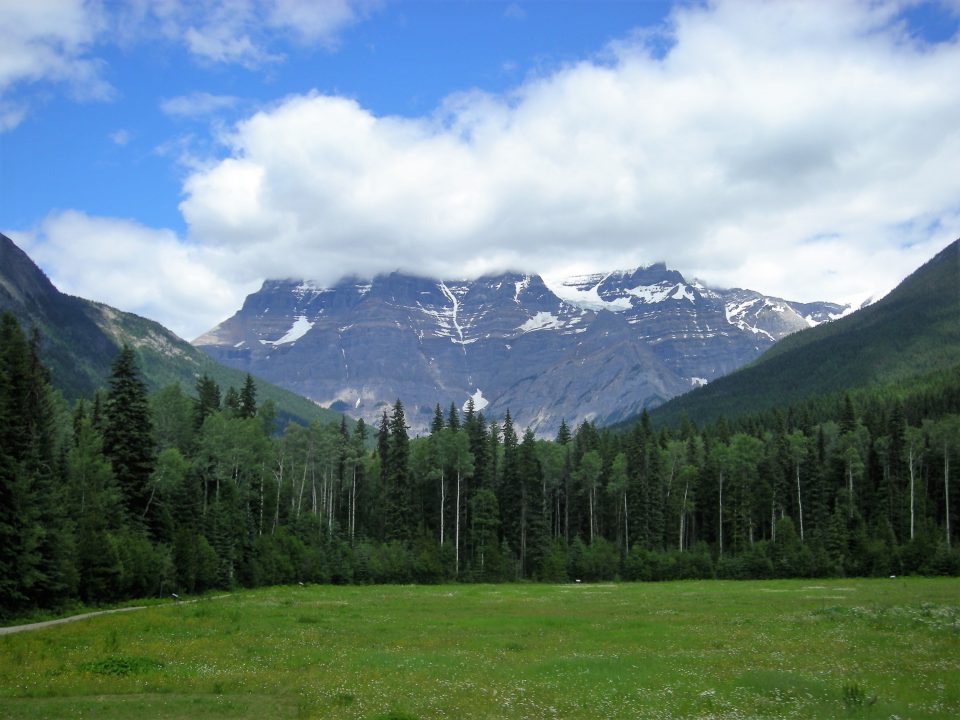 Our next stop was Mount Robson Provincial Park. The main feature of this park is Mount Robson which is the highest mountain in Canada’s Rocky Mountain range.

You are supposed to get a great view of Mount Robson from the car park of the Mount Robson Visitor Centre. However, the peak was obscured by clouds on our visit.

We then went inside the Mount Robson Visitor Centre to look at the exhibition which included information on the park and its wildlife. The most interesting item on display was a destroyed coffee can which a grizzly bear had tried to ‘taste’.

I thought this was a good place to send my girlfriend, who hadn’t travelled, a postcard. Just to show I obviously hadn’t forgotten about her! 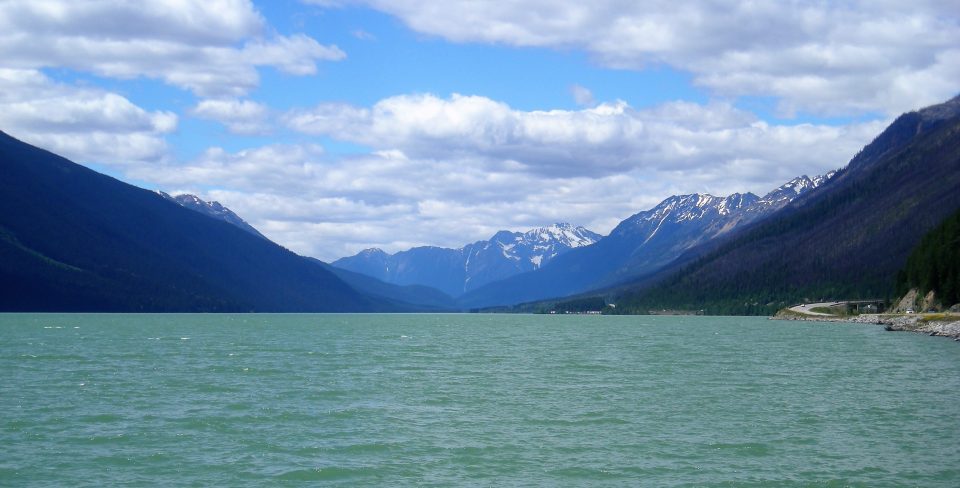 Only a short distance away from Mount Robson we then arrived at Moose Lake, British Columbia.

We were amazed by Moose Lake’s turquoise waters which were surrounded by snow-capped mountains. The view really was amazing and we took some time to truly appreciate it. 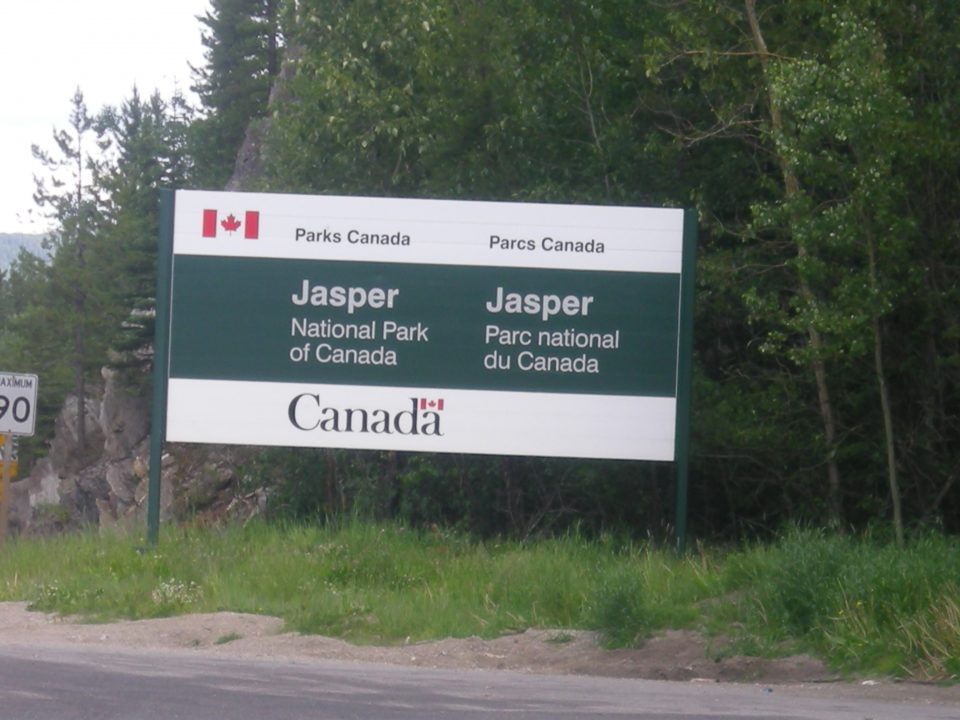 It was then time to leave British Columbia and cross the border into Alberta. Once we crossed the border signage informed us that we needed to adjust our time forward by an hour. 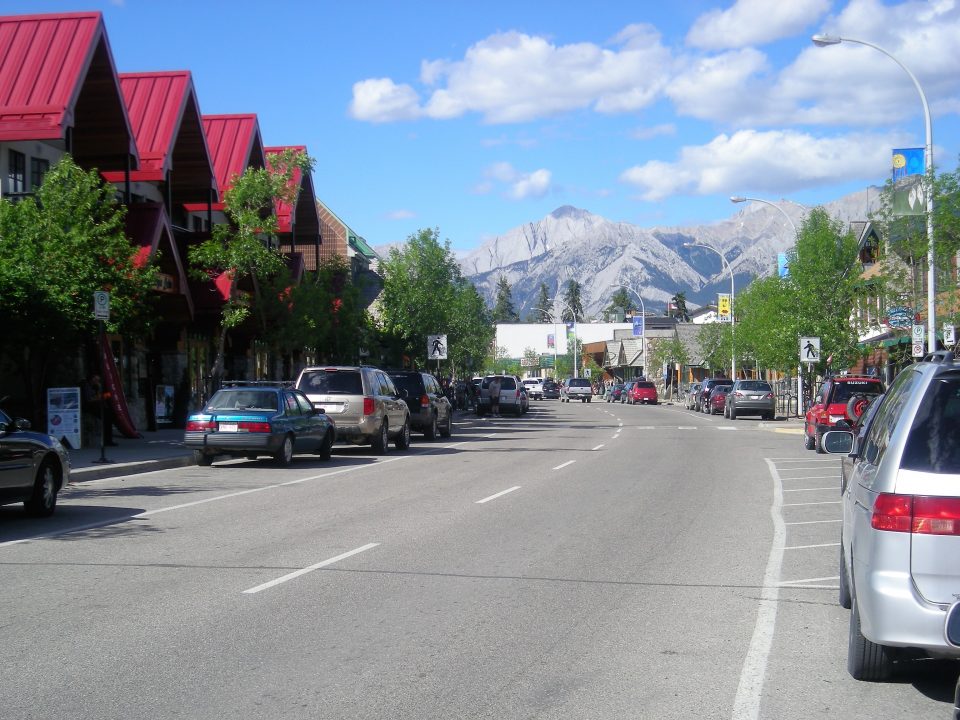 Once we arrived in Jasper, Alberta we dropped our bags off at our hotel and then had a look around the town.

Surrounded by mountains, Jasper has to be one of the prettiest towns I’ve visited. We had a good look around Jasper’s shops, bars and restaurants.

We then walked down to Jasper, Alberta’s tourist information centre which was in the middle of a small park. In this park, we enjoyed a dance performance from a group of First Nation’s people. 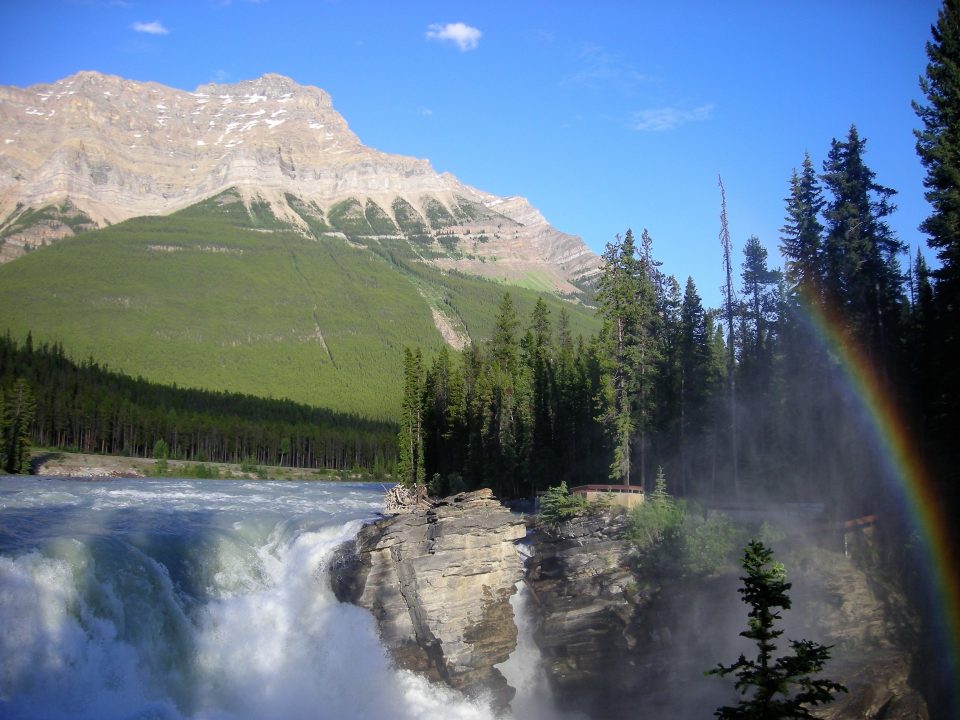 With early evening fast approaching we then got back into the car for the short journey to Athabasca Falls.

These falls are powerful and intense. The mass of water falling into the gorge below left me amazed. If anyone fell in here I could see no hope of survival.

Combined with the surrounding scenery, Athabasca Falls is definitely one of the highlights of Jasper National Park.