It was another awesome day in Alberta as we used Jasper as a base to explore Jasper National Park and see Jasper Tramway, Whistlers Mountain and Maligne Lake.

After travelling to Jasper yesterday, it was a change not to have to travel one way in the car. We would get the whole day in Jasper and the surrounding area and another night.

Once we left the apartment we found that some elk were grazing directly outside. A few other people were out taking pictures of them too. 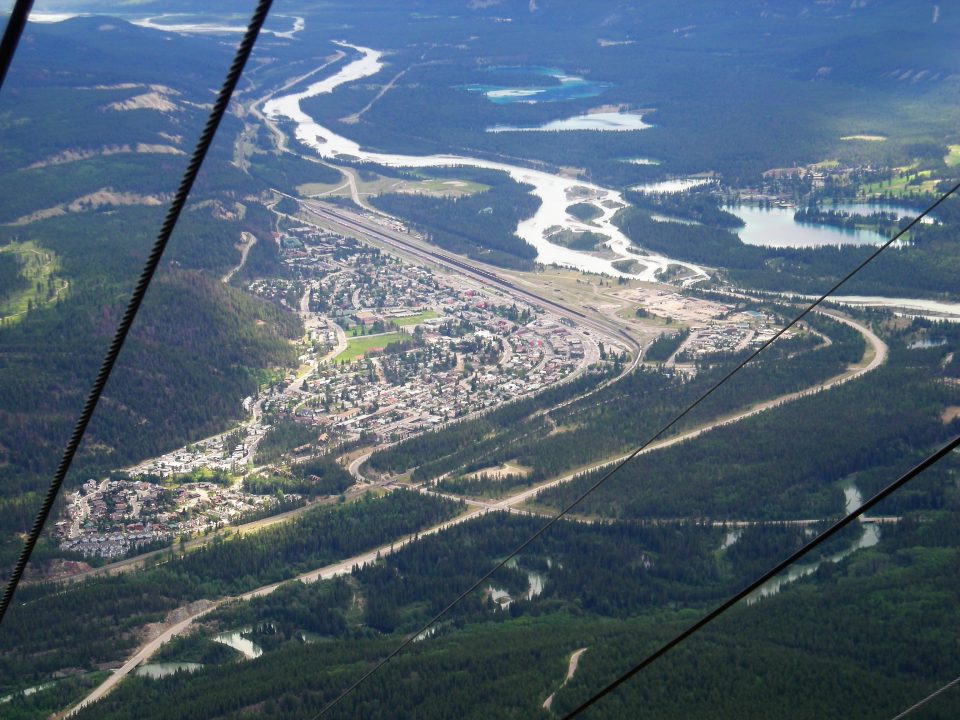 Our first order of business was to head to the Jasper Tramway. This cable car is the longest tramway in all of Canada.

Once we paid the admission price and we entered cable car, it took us up to a height of just over 2,200 metres up Whistlers Mountain. It took about seven minutes and a member of staff was on board to give us some information about things we could see. As the cable car was quite crowded it was difficult to see everything.

After arriving at the top it was time for a quick cup of tea in the cafe, taking in the nice views. 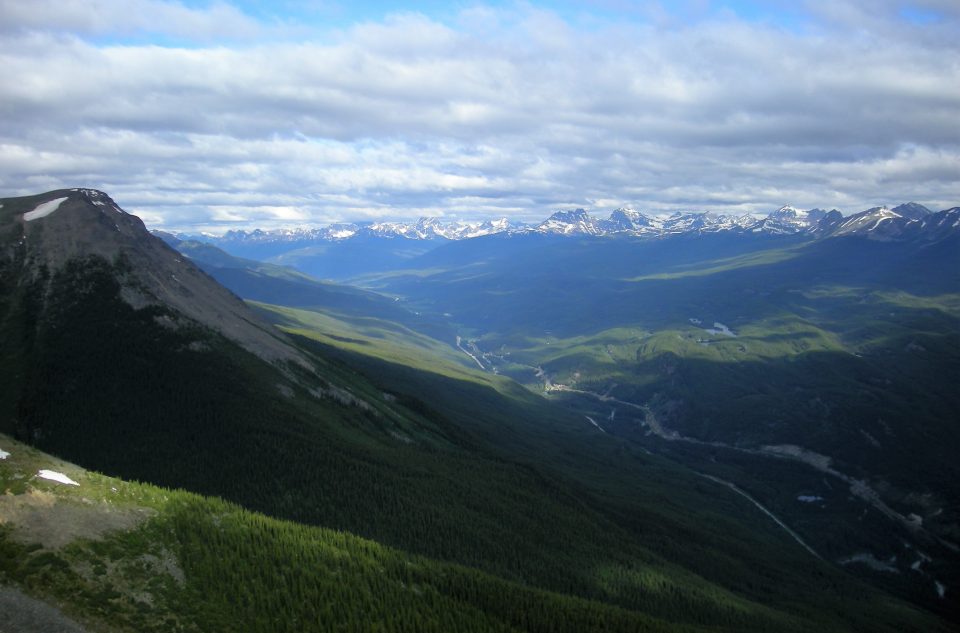 Feeling much more refreshed we then took in the view from the Jasper Skytram viewpoint. The view was spectacular and you could see quite a lot of the Maligne mountain range, rivers, trees and the town of Jasper.

The view really was breathtaking and we took some time to get some photos and videos. It was at this point we noticed that the temperature had dropped quite a bit too. There were patches of snow on the ground.

Not the only one enjoying the view… 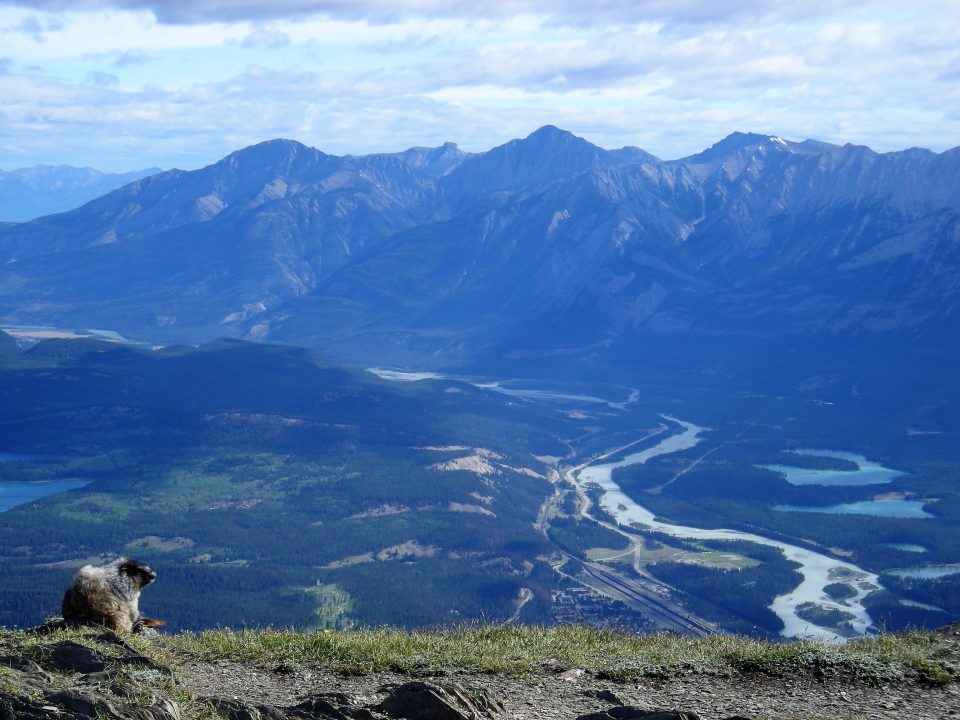 While two of our party decided to stay near the viewpoint area, I decided to finish the small hike to the summit of Whistlers Mountain. On the way up the view got better and better.

Turns out that I wasn’t the only one to be enjoying the view. A marmot was also sat on the end of a cliff admiring the scenery. It was quite a surreal sight.

The summit of Whistlers Mountain 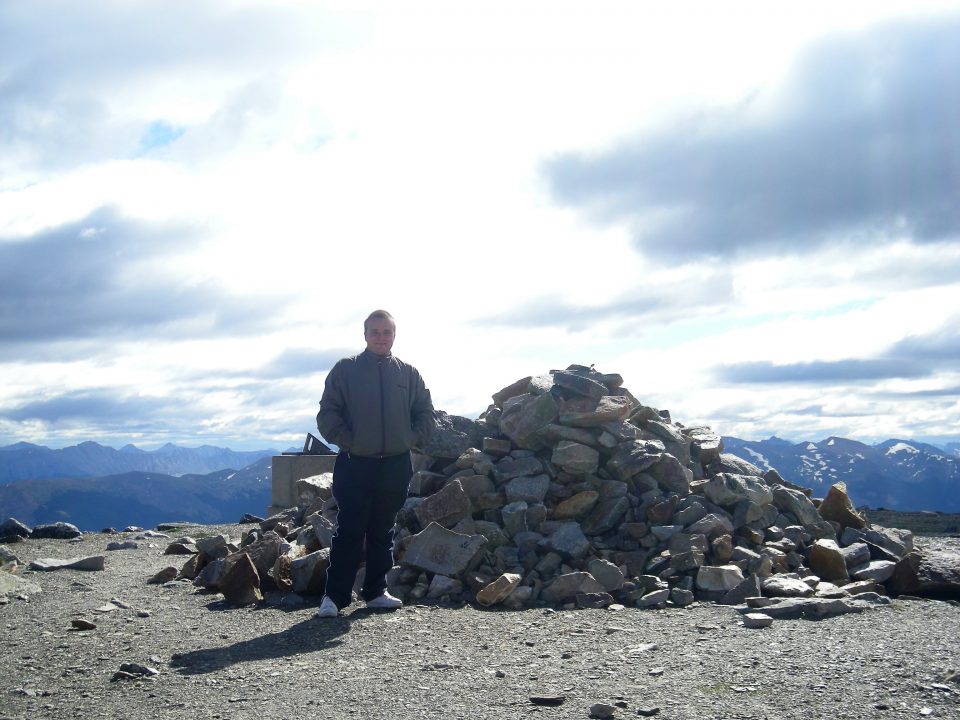 It didn’t take me too long to get to the summit of Whistlers Mountain. Although it got colder and colder on the way up, and patches of snow started to appear more often. I can safely say I had never walked on snow in the month of July before! At the peak was a pile of rocks and a sundial.

Another group of people offered to take my picture as I was on my own! Apparently to prove I had made it to the top. Pity they didn’t know that I took the tram most of the way! 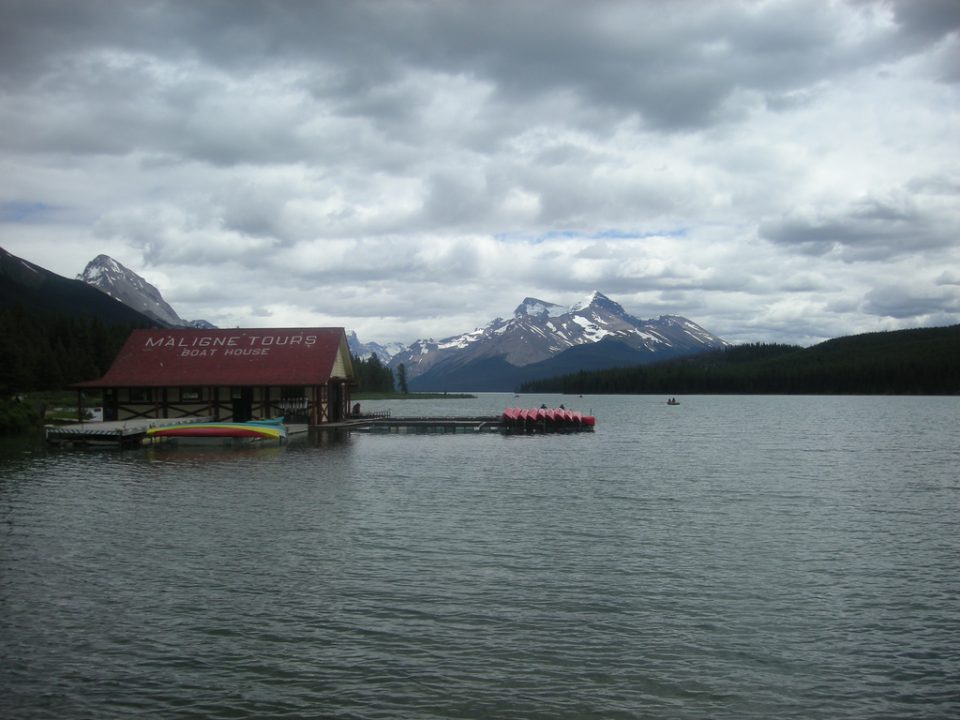 After a quick stop back in Jasper we made the 50 km drive to Maligne Lake. The road was quiet a long the way with very little traffic. But we did see a few bears!

I’d heard of Maligne Lake when researching this trip and had seen its beauty on the internet. But it was much nice to see in person.

The colour of the water was such a distinct blue and the surrounding mountains and glaciers meant that we took loads of photographs. None of them would do it any justice though.

We were hoping to have a boat trip on the lake but they were not running on our visit. Instead we had a cup of tea and a chocolate chip muffin and enjoyed the view from the cafe. 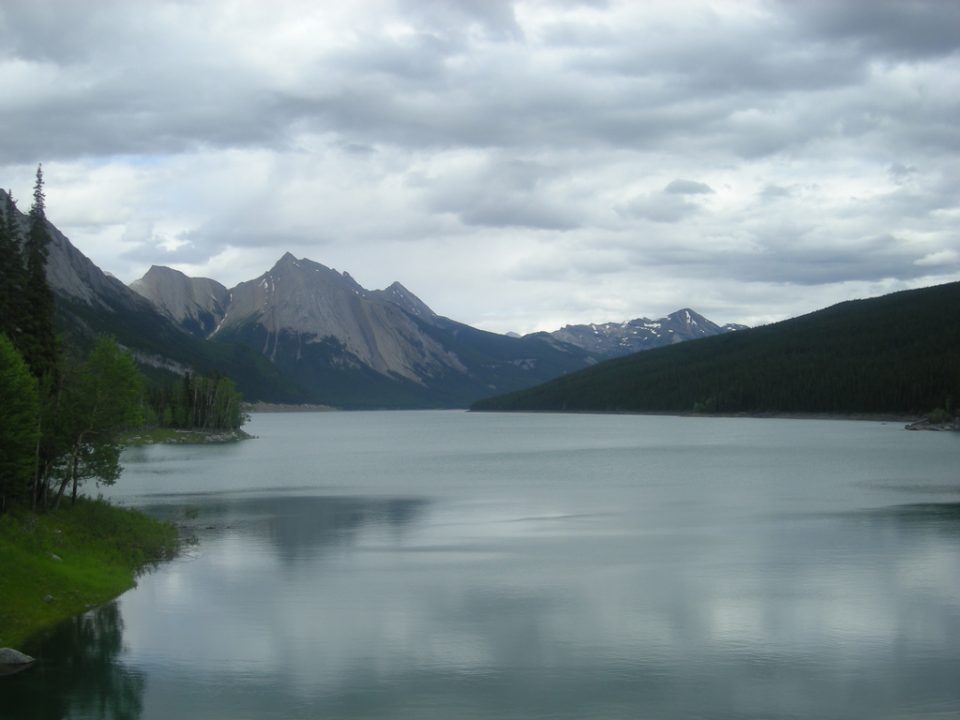 On the road back to Jasper, and seeing a few more black bears, we made a stop at Medicine Lake.

I thought that this was quite a narrow lake, despite it being long. Whilst I didn’t think it was impressive as other lakes I’ve seen, it still had its own charm.

It was then back to the apartment to rest for an hour, and once we’d had something to eat we made the short journey to Maligne Canyon.

We arrived at early evening so it was very quiet as we walked along the trails and over the series of bridges. With all our bear sightings earlier I kept expecting one to jump out of us when going around corners. Luckily we were pretty safe.

The only annoying thing was that my camera battery had died so I couldn’t get any pictures of this beautiful canyon.

Despite getting no photos from Maligne Canyon, it was another good day in Jasper and the surrounding area. We are making the trip down to Banff tomorrow along the Icefields Parkway.