By: ynysforgan_jack
In: Lisbon, Portugal, Travel
With: 3 Comments

After months of anticipation we made a triumphant return to Lisbon. This time with our friends to celebrate the good wife’s 30th birthday.

Triumphant that is if you enjoy going to bed at 10pm and setting the alarm for 12:45am. A time when no doubt most cockerels were still in a state of slumber and the owls just starting their night shift. Although it was still exciting to go back to Lisbon.

From Swansea to Lisbon 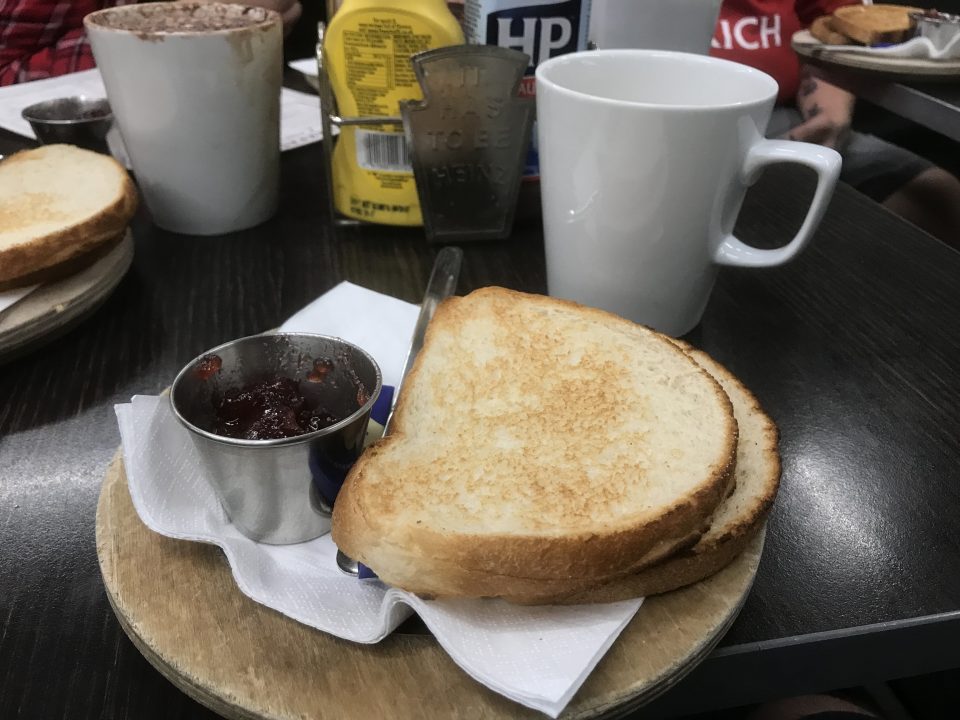 We were picked up by Big Phil, driver extraordinaire for our airport transfer at 2am. The trip to Bristol Airport was uneventful apart from the Brynglass Tunnel being closed.

At the airport there was little chance of us arranging a small mortgage to cover the cost of breakfast. We opted for toast instead and several coffees to keep us awake.

Once we landed in Lisbon we got a taxi to the hotel. After a quick beer (really two) it was off to explore the Portuguese capital. 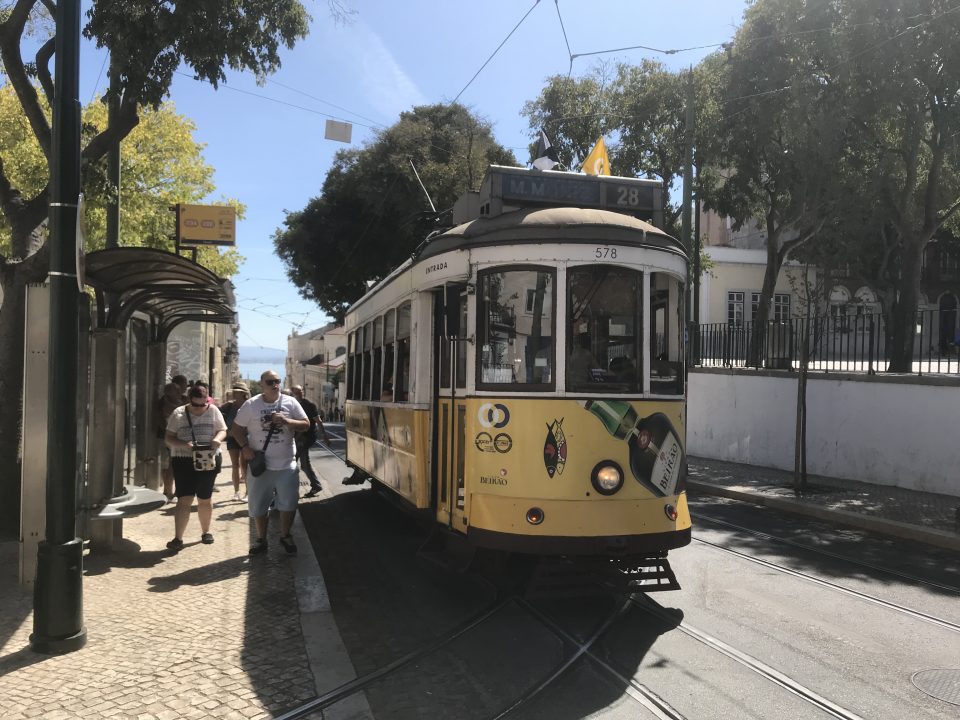 Our first order of business was to take a trip on one of Lisbon’s famous trams – Tram 28.

We boarded at a stop not far from Praça do Comercio and crammed on board like peas in a pod.

Fortunately there were no broken bones or falls, even if the tram shook us around the narrow streets of the Alfama district. 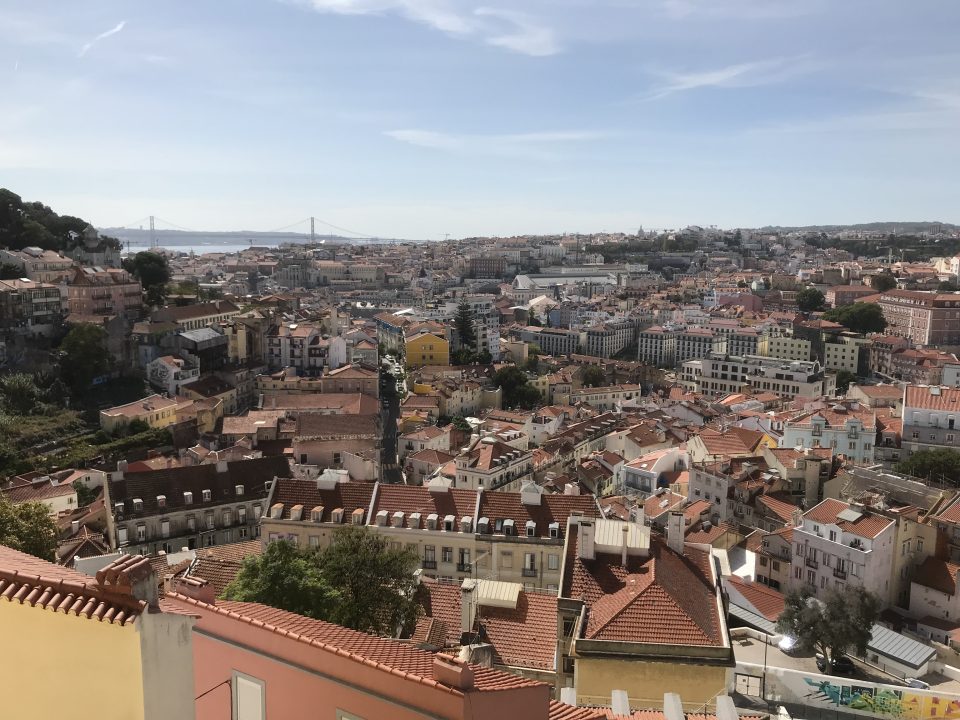 We disembarked the tram at Graça Station and made our way to the amazing viewpoint of Miradouro da Graça.

It was great to sip on a Super Bock and admire the view of Lisbon from here. Although Dry Mark described his iced tea as “tasting of pickle”. 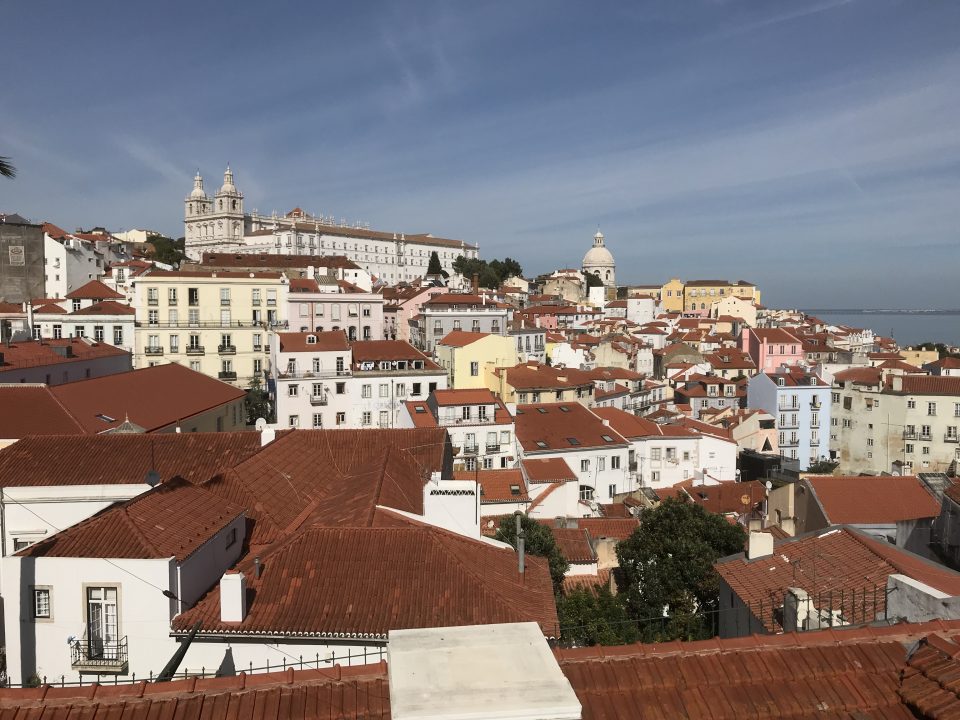 It was only a short walk for us downhill to Largo das Portas do Sol. This is another example of Lisbon’s great viewpoints. As well as views of the Tagus river we could see the National Pantheon and the city’s fantastic red tiled skyline. 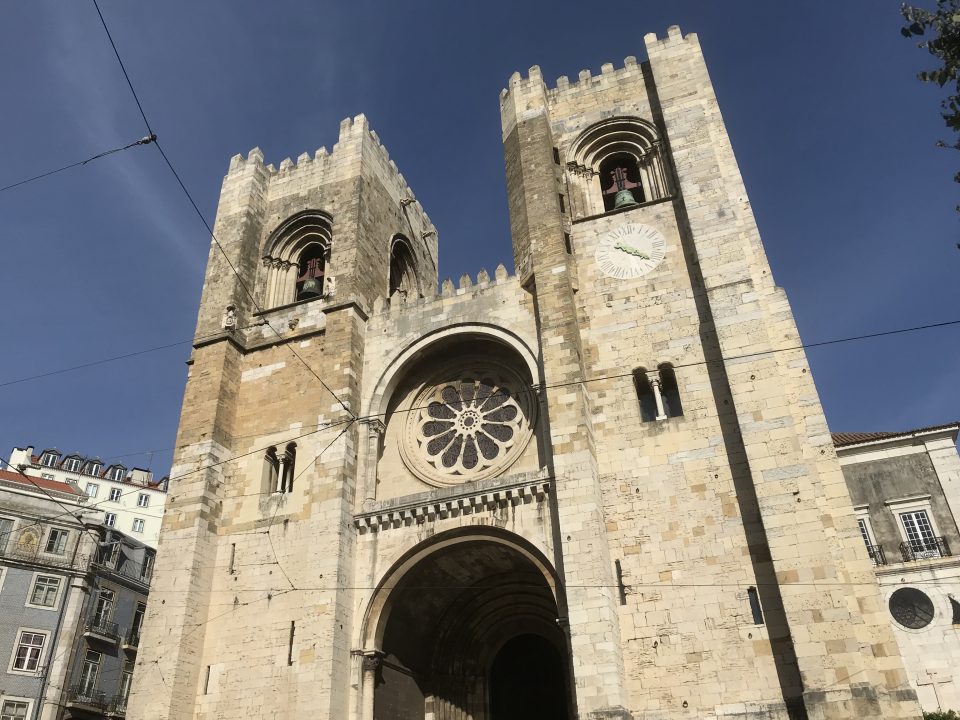 The downhill walk from the Alfama to Sé involved us avoiding a great hoard of people, buses, trams, angry pigeons and cars all trying to occupy the same space. As it’s one of Lisbon’s main attractions it certainly attracts the masses. 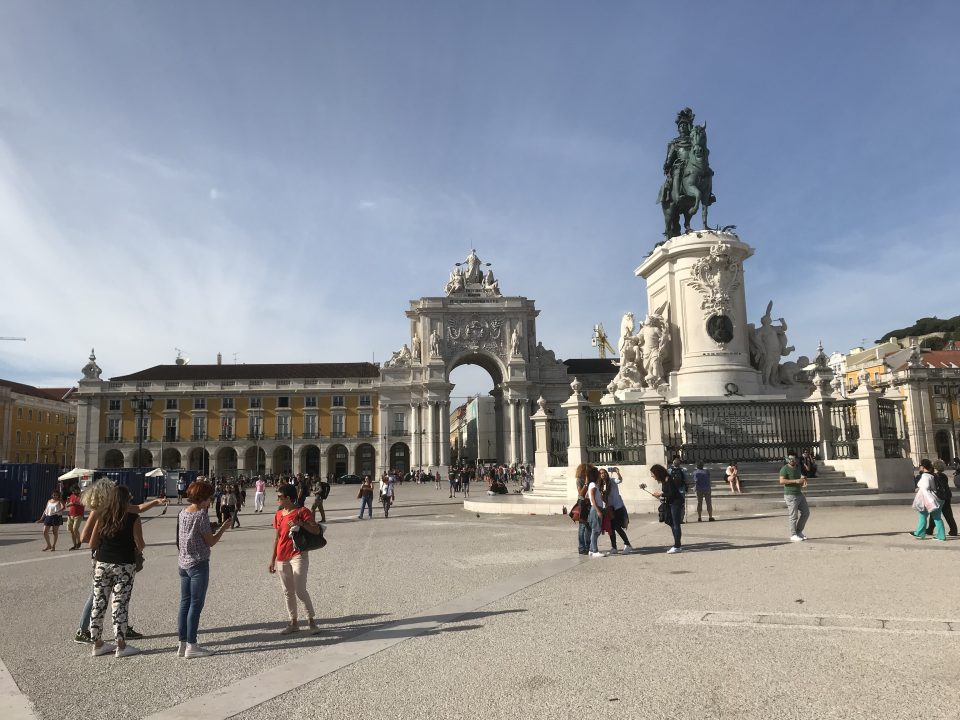 Our next stop was Praça do Comercio. This huge gateway was designed in the 18th century to impress tourists arriving in Lisbon by ship. There’s a statue in the centre of Dom José I, a former King of Portugal.

A random shipping crate market was taking place here too. Dry Mark and Al took this opportunity to ingest a hot chilli lemonade that was on offer. Mark dared to go one step further and he consumed the spicy beast and its seeds. Although he wasn’t happy when he accidentally wiped the remnants in his nose. Ouch! 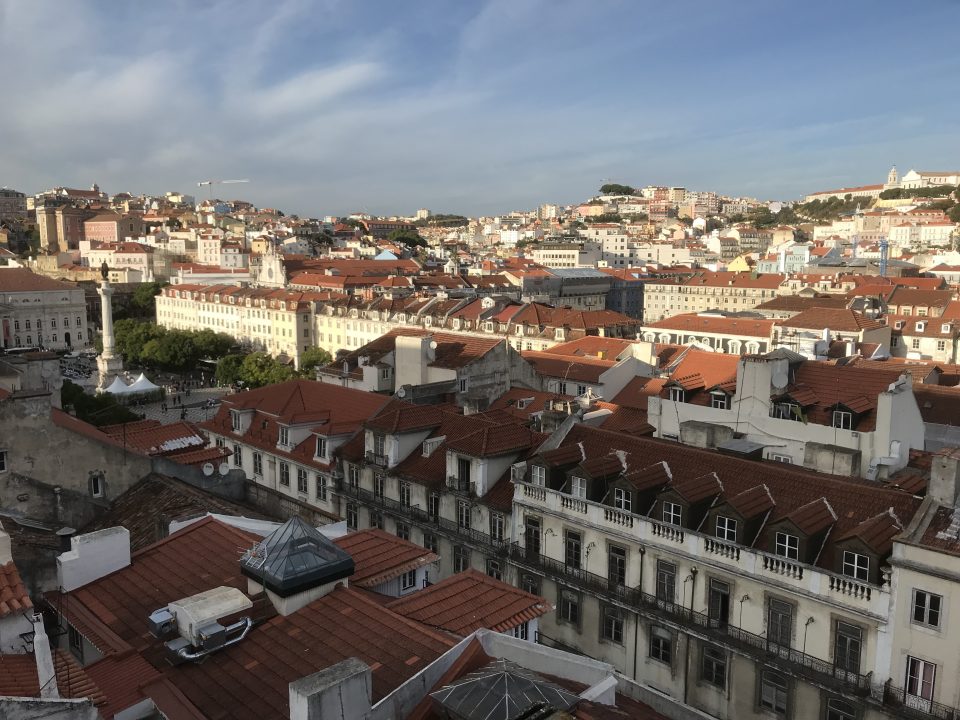 Fatigue was rapidly kicking in now after only 2.5 hours sleep the night before. So we decided to take a shortcut for our evening meal. The Santa Juste Lift presented us with the ideal solution.

It took us from Baixa to Largo Do Carmo in Bairro Alto in less than 49 seconds, according to the wife’s stopwatch. (Note: the wife doesn’t actually have a stopwatch).

The views from the top of the lift were amazing. We were able to pinpoint all the locations we visited earlier on Jo’s map. (Note: like the the wife’s stopwatch, Jo hasn’t actually got a map). 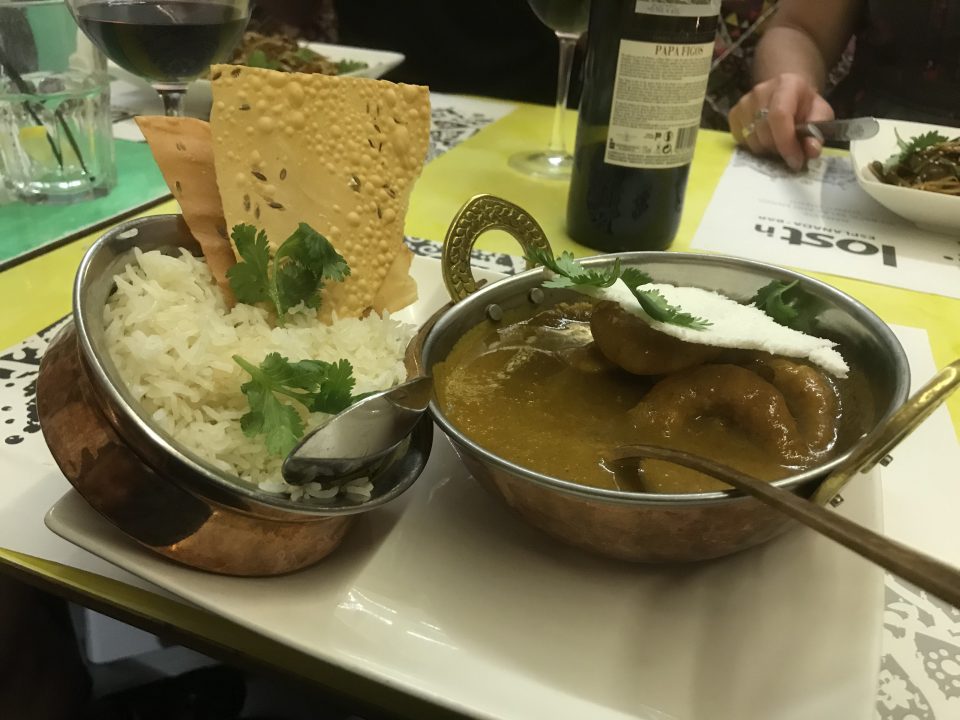 In Bairo Alto we returned to a bar that I visited on my stag-do – LostIn Esplanada Bar. Simply put the food and wine we all had were delicious. It was a great way to bring the day to the end with (tired) friends.

2017-09-22
Previous Post: A day trip to Melk Abbey and the Danube Valley from Vienna
Next Post: Visiting the famous Lisbon district of Belem