By: ynysforgan_jack
In: City-break, Madrid, Spain, Travel
With: 1 Comment

We woke up to another hot and sunny Monday morning in Madrid. We were soon ready to set out to visit some more of the Spanish capital’s attractions. El Retiro and Musoe del Prado being on our radar.

Walking on the cobbled streets of Toledo the day before had taken its toll on our feet. So we had to use a few blister plasters before setting out. But we certainly wouldn’t let this minor inconvenience hinder us adding some mileage to our footwear. 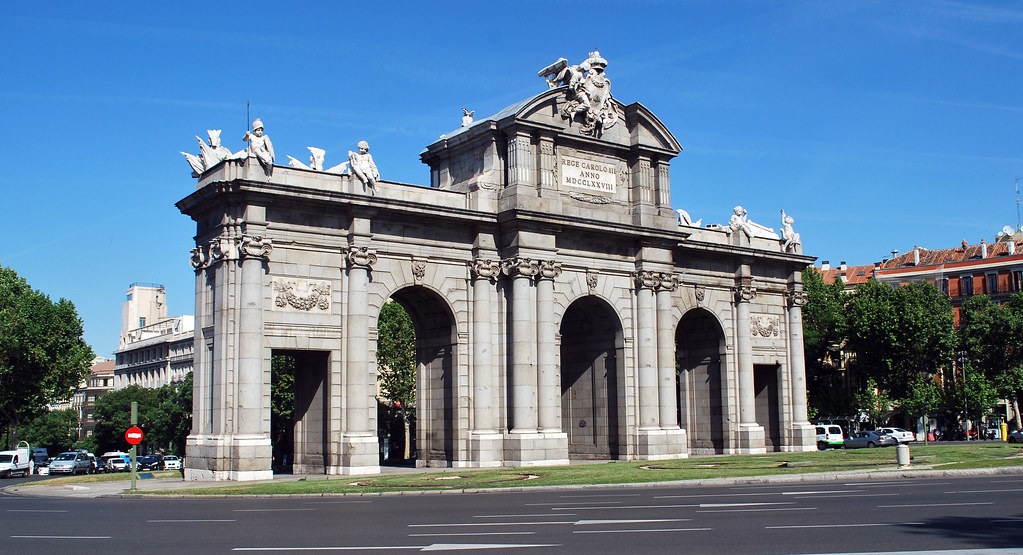 As the weather was so good we decided to head to Parque del Buen Retiro. Better known simply El Retiro.

This park is a huge area consisting of green spaces, woodland, a lake and flower gardens. There are number of notable buildings and landmarks.

Just outside the north west entrance to the park is Plaza de la Independencia with its gate Puerto de Alcala. This gate was built in the 18th century to replace an earlier version of it.

At the end of the Summer for a ceremonial event, this roundabout is closed to traffic and sheep are transferred to their winter pastures.

After entering El Retiro and successfully refusing to buy heather off a persistent elderly lady, we came our first area of interest. 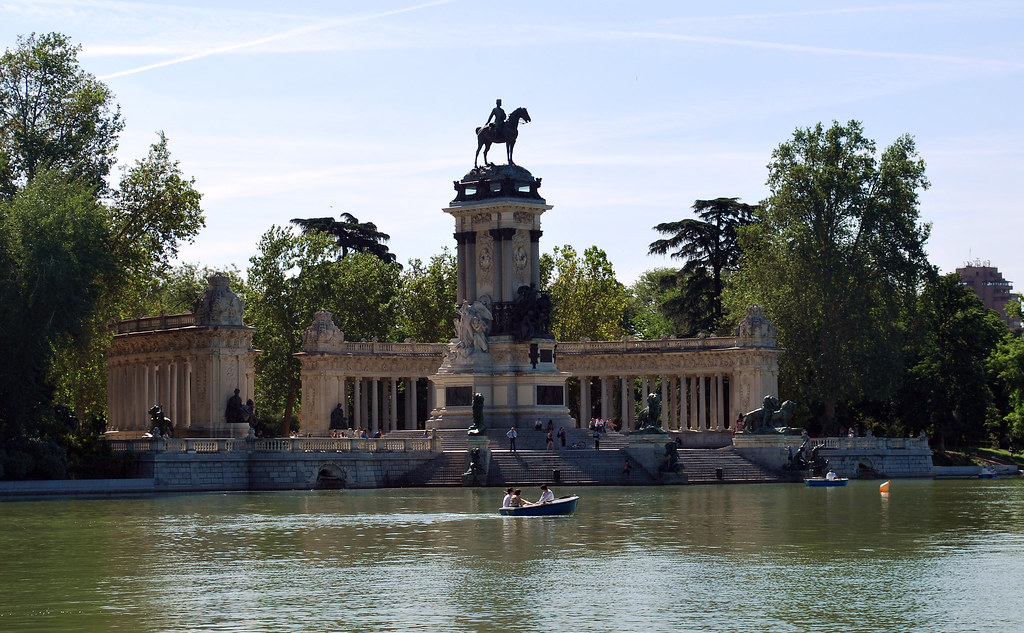 With a boating lake as the foreground, the large monument dedicated to Alfonso XII is quite impressive. It makes for a good picture.

My girlfriend wanted us to use one of the rowing boats at this point. But we reconsidered after taking into account how clumsy I am. I would have probably found a way to overturn the boat!

On the far end of the lake is an Egyptian themed monument called Fuentes Egipcia. Rumour has it that a great treasure is buried under here. Hayley had forgotten to pack her metal detector so we could not verify this rumour. 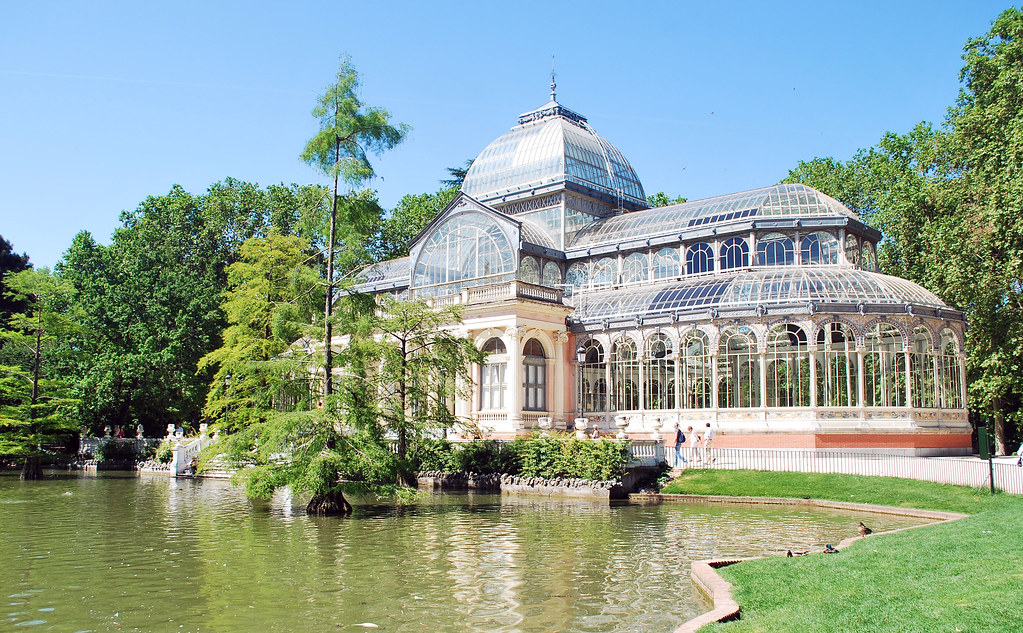 To the south of the lake are two elegant buildings.

The first is Palacio de Velaquez. This intriguing building was built in the late 19th century and now hosts a free contemporary art exhibition.

The second was Palacio de Cristal which is a structure comprised of glass panels and a metal frame. With a pond, some ducks, a fountain and a waterfall as its front garden, this is probably the most impressive of El Retiro’s attractions.

At this point a lady offered to take a picture of us in front of the palace. She returned the camera after taking the shot and walked away. When I checked to see what the image looked like she hadn’t actually taken a photo. Perhaps the camera had confused her?

The inside of the building also hosted a contemporary art exhibition. This exhibition featured lots of broken glass and hundreds of black bottles. There was an old fashioned monitor sitting on top of them.

The path outside Palacio de Cristal leads under a waterfall before circling around to one of the main routes towards the very south of El Retiro. 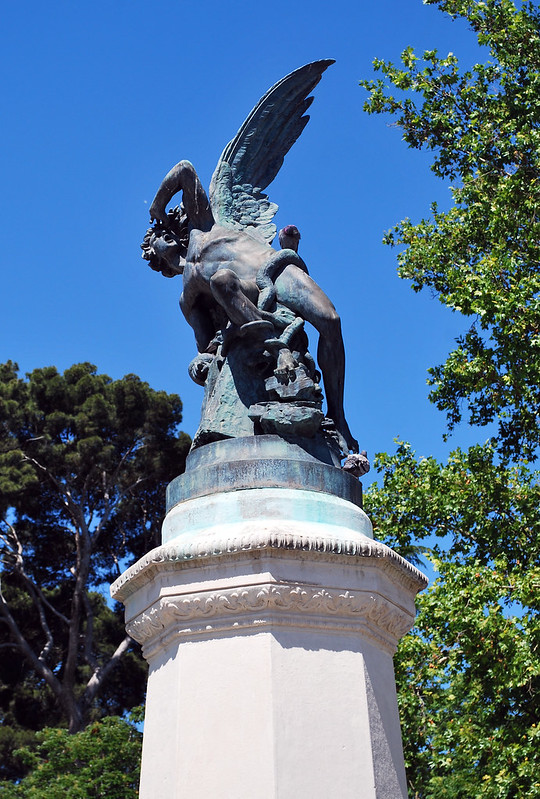 There is an unusual statue here dedicated to the devil. El Angel Caido depicts Lucifer as he fell from heaven. In an interesting side note the statue is 666 metres above see level.

Apparently this is one of a few statues based on Satan in the world (my girlfriend thought Satan was pronounced Saturn). The only other statue like this I know of is Old Nick who sits above an entrance to the Quadrant in Swansea. 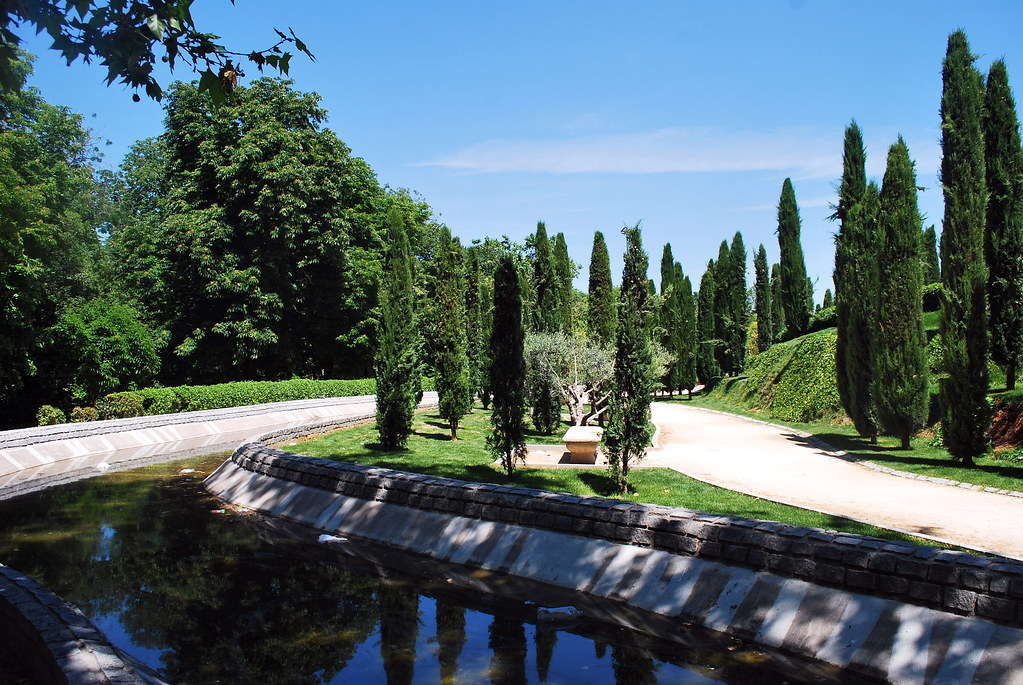 We started heading north again at this point to Bosque del Recuardo. This is a small memorial garden to the victims of the 2004 Madrid bombings. A tree has been planted for each person who sadly lost their lives.

It was a really nice walk around El Retiro. Although I’m sure if my feet had a mouth they would disagree and call me an idiot. Luckily my feet don’t have a mouth as they would probably moan all the time. But more importantly it would be very odd. I wonder what their voice would be like?

The park seems to attract a variety of folk including tourists, locals, joggers, dog walkers, skateboarders and cyclists. There was even someone dressed as a tree! 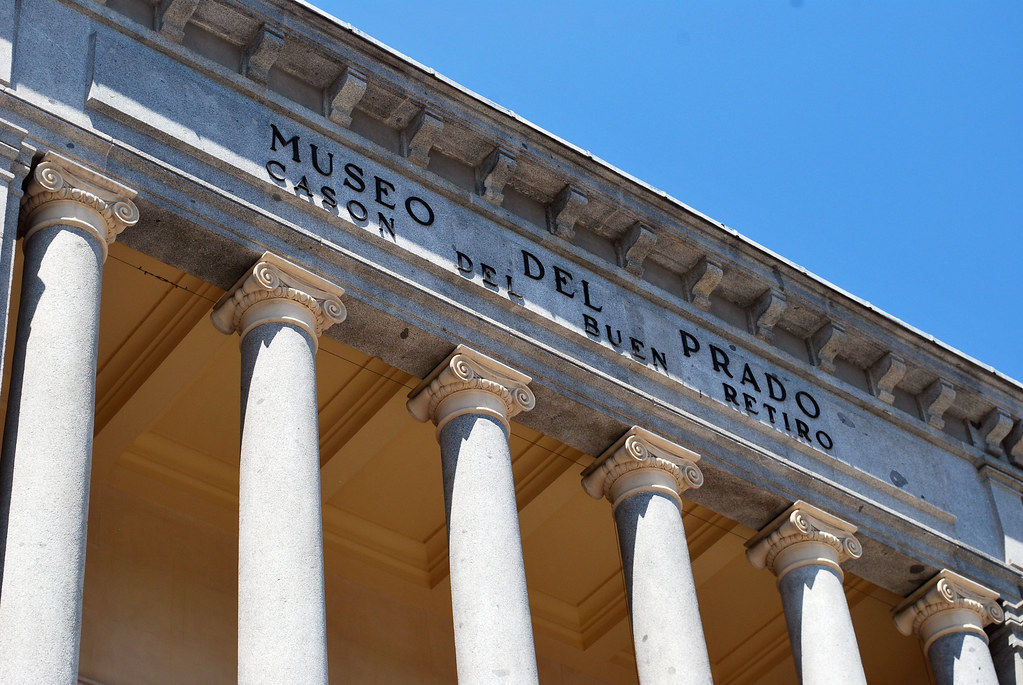 At this point we made the short walk to Museo del Prado. Renowned as being one of the most impressive traditional art galleries in the world.

After parting with €12 each for entry and passing through security we entered the huge gallery.

The Museo del Prado is based over three floors. It’s home to over 1,500 items of artwork by artists such as Goya, Velaquez, El Greco, Rubens, Bosch and Rembrandt.

My favourite of all the paintings was The Garden of Earthly Delights by Bosch. This weird painting is spread over three panels and depicts heaven, the Garden of Eden and hell with seemingly unusual detail.

Back outside the gallery is a statue dedicated to Valaquez.

Lunch and wandering the streets of Madrid 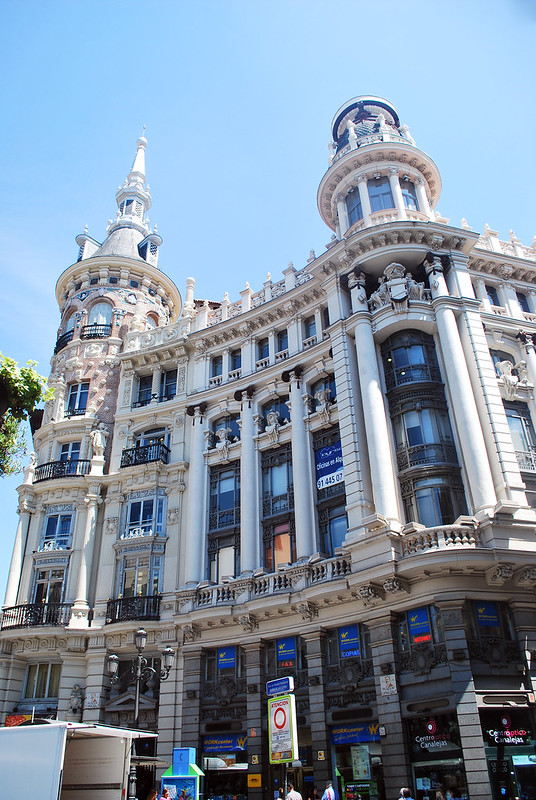 We then made our way up towards Plaza de Canalejas. This circular plaza is home to some interesting façades, architecture, bars and restaurants.

We then stopped for food in a restaurant called La Cathedral. I chose this venue as it was one of the few restaurants that doesn’t feel the need to use pictures to depict their food.

I ordered a mixed seafood paella for starters and then opted for lamb medallions with green peppers for main. Both seemed to satisfy my grumbling stomach. I had to leave what looked like a mini lobster because, to be honest I wouldn’t know how to consume it.

We then made our way back to the hotel to rest our aching feet. Which I still maintain do not have the capability to speak. We then got ready for a few drinks in the bars near our hotel.