A day trip to Toledo from Madrid

It was up at the crack of dawn this morning to have an early breakfast before going to Toledo.

After the bus dropped us of at Atocha Station. We took some time to figure out that the phrase next to our train on the notice board ‘planta baja’ meant downstairs.

Lonely Planet describes Toledo as a ‘downsized Rome’ so we had high expectations for this city. If you’re a history buff, Toledo is noted as being a place where Christians, Jews and Muslims lived together in peace. Toledo also has UNESCO heritage status. 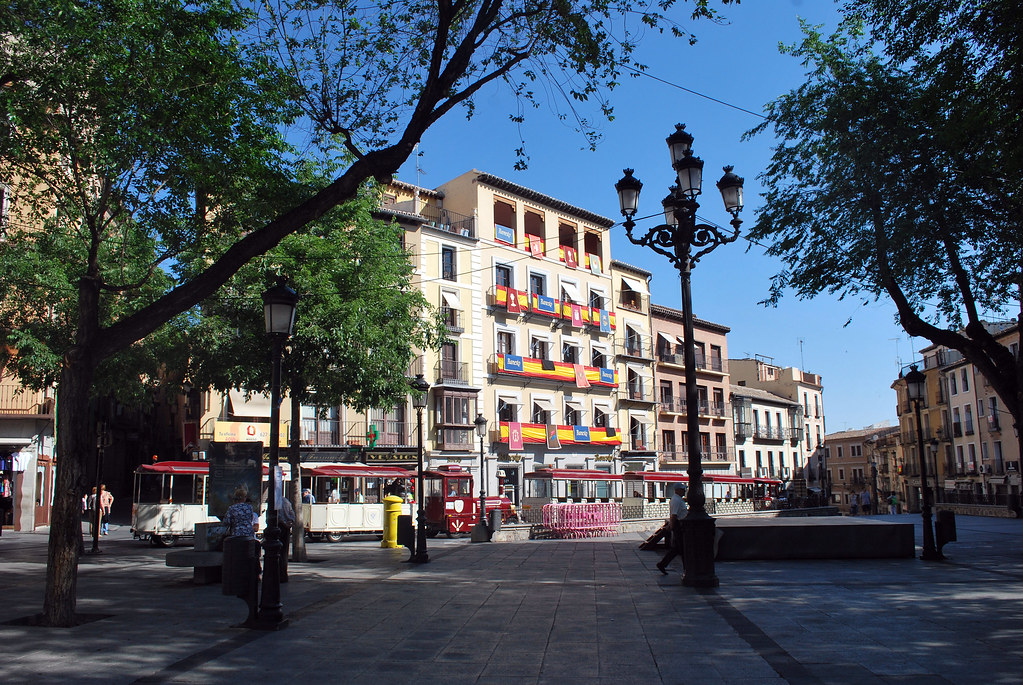 The train journey to Toledo only takes 29 minutes. We then hailed a taxi up the steep hill to Plaza de Zocodover.

This public space, like Plaza Mayor in Madrid was formally host to a market and also staged a number of public executions.

Our fate was not as bad as the aforementioned executions. But instead of paying top dollar (or Euro) for a cup of tea in the expensive cafes surrounding the square we consumed one in McDonalds.

On one side of Zocodover is a gate called Arco de la Sangre. At the bottom of the stairs there was a statue. At first I assumed incorrectly that this statue was a street buskers like you see all over the world. It honestly looked like it wanted spare change. 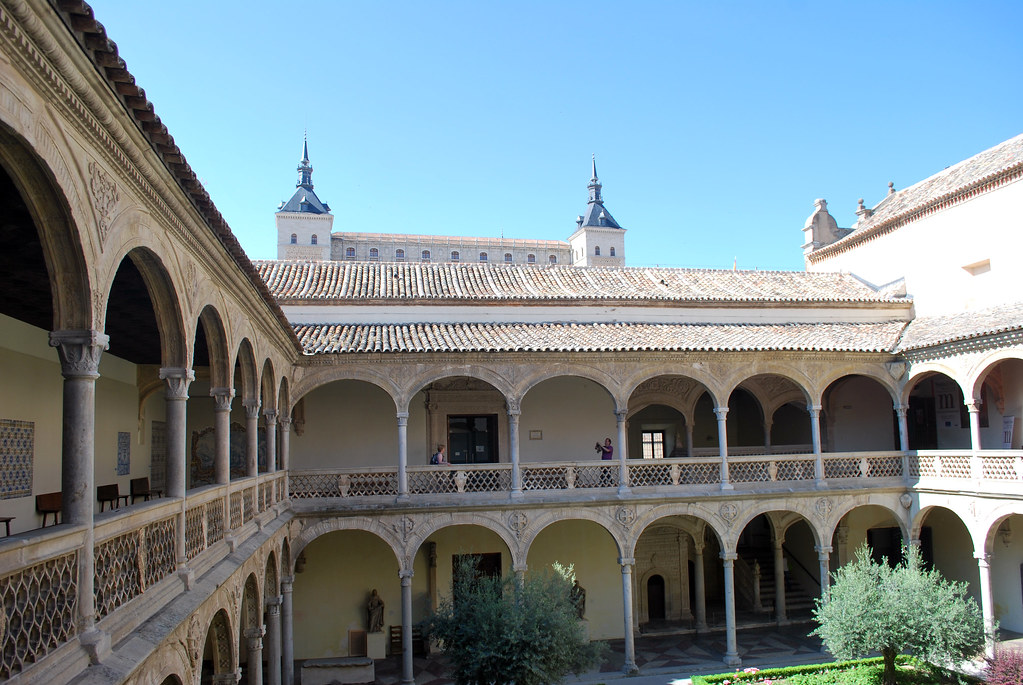 We then veered left to the Museo de Santa Cruz. This museum holds an impressive collection of Spanish ceramics. There was alsoa beautiful open central area with decorative arches on each floor. 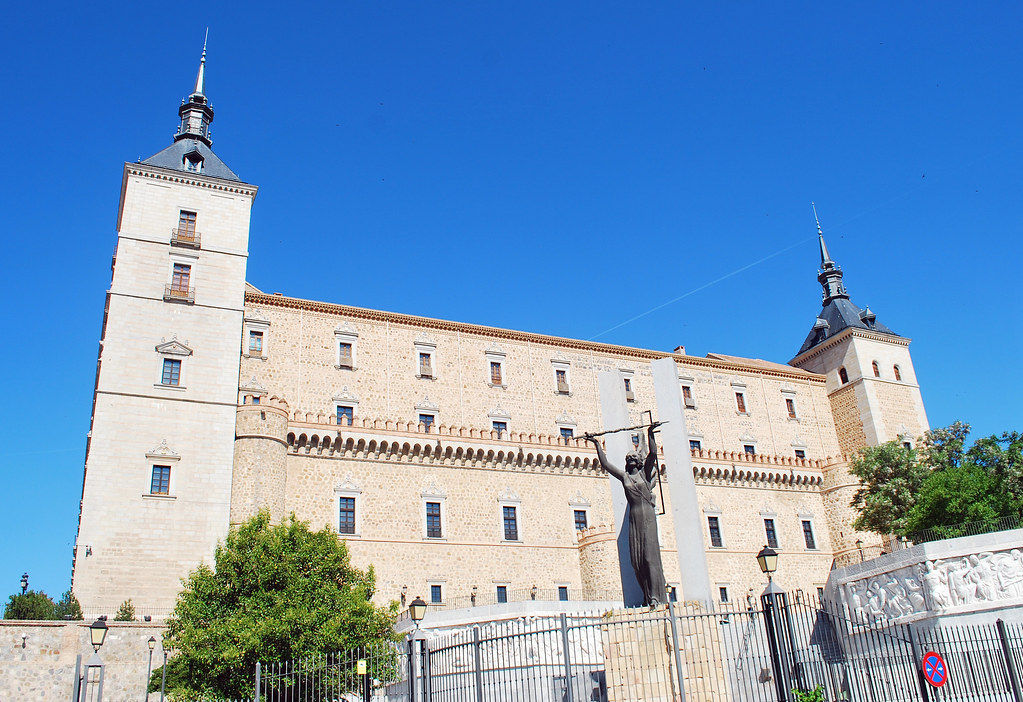 Next on our agenda was Toledo’s Alcazar which seemingly sits on the most prominent area of the city.

The Alcazar is very imposing with four spires on each corner. The current structure was largely rebuilt after a siege on Franco’s forces in the 1930’s which destroyed the building.

The only disappointment was that you can’t actually visit the building.

In the grounds at the front of the Alcazar is a viewing point which gives a good view of the surrounding area. What was interesting was that the roads opposite were closed and hundreds upon hundreds of motorcyclists were making their way up into the mountains. 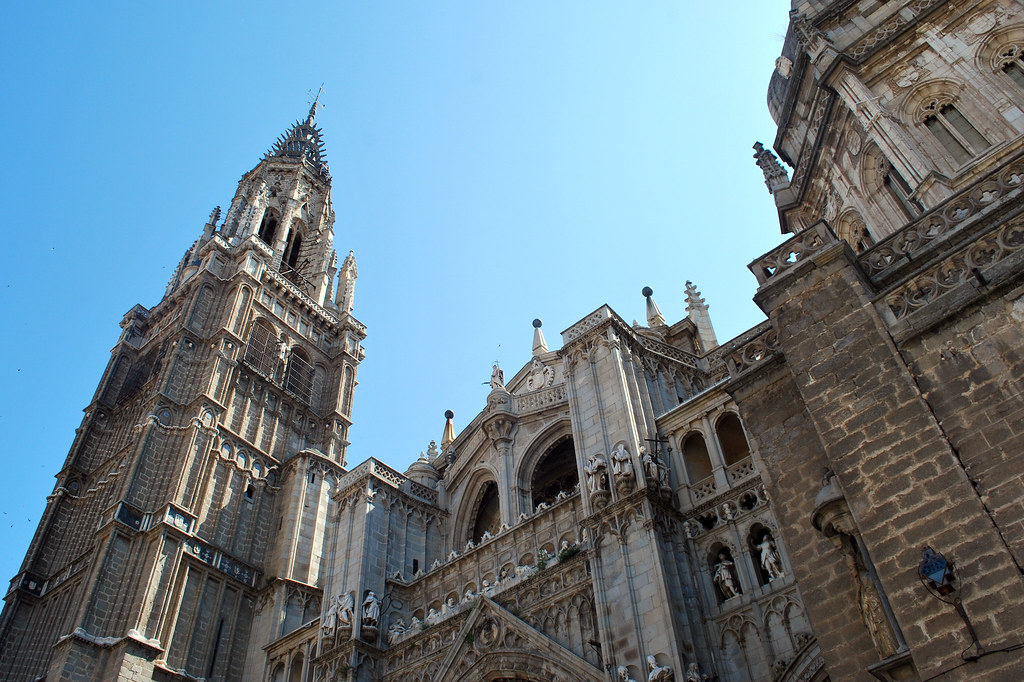 The walk into central Toledo was quite interesting with narrow cobbled streets, shops and a mosque called Mezquita de las Tornerias.

As we were making our way to Catedral de Toledo, there was a series of loud bangs which really frightened my girlfriend. They later turned out to be fireworks set off for someone’s celebration.

Similar to the Alcazar, Toledo Cathedral is prominent in the city. This place of worship has had roots in the city throughout history including Visigoth, Muslim and Christian eras.

Just to the north of the cathedral is Centro Cultural San Marcos. Inside is an interesting exhibition on the Holocaust and a 17th century domed roof complete with colourful frescoes.

We then found a small restaurant to quench our thirst. But despite it being completely empty the waitress would not serve us beer unless we ordered food to accompany it.

The busier restaurant next door was more than happy to accommodate us for a beer. By the time we left, the original restaurant we had entered was still empty. I can only assume the waitress wanted an easy shift.

The best views of Toledo 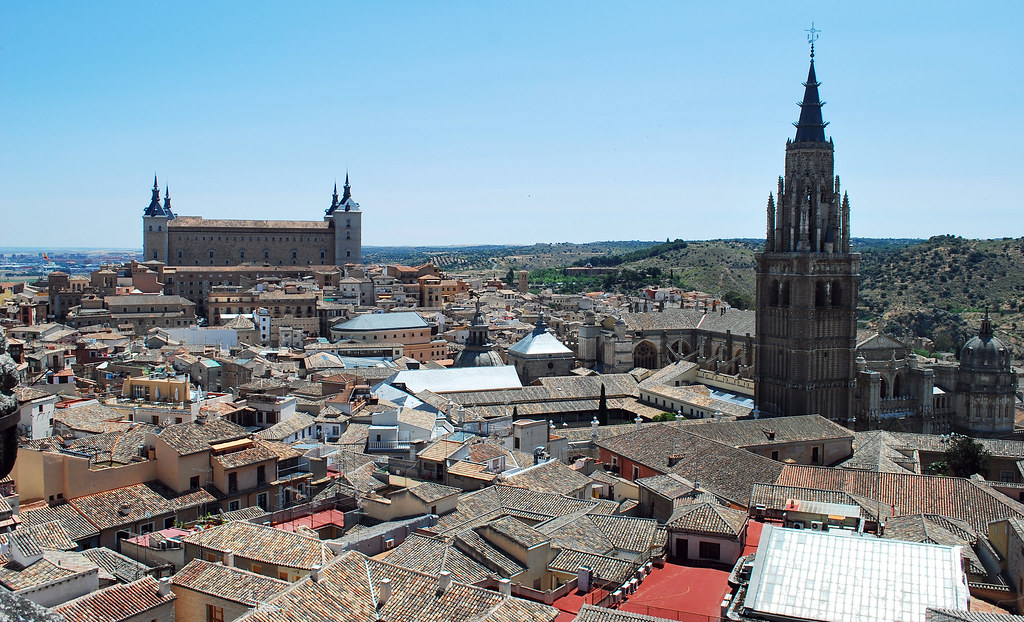 From here we visited Iglesia San Ildefonso. This impressive church’s main feature is the towers which give you panoramic views of the whole city. All they ask in compensation is for you to part with €2.50 and then to make the steep climb up 139 stairs.

It was an added advantage that we had the viewing point all to ourselves. This was increasingly surprising since there were so many visitors to the town.

Our stomachs were rumbling at this point so we headed to the nearest restaurant called Kumera. After being presented with the menu and obviously knowing no Spanish we ordered some random dishes. It roughly translated as stew for starters and then beef and lamb for the main course.

To be fair the food was excellent. The starters was some kind of vegetarian stew, while the lamb was a roasted shoulder on the bone served with potatoes. The beef was a standard steak. 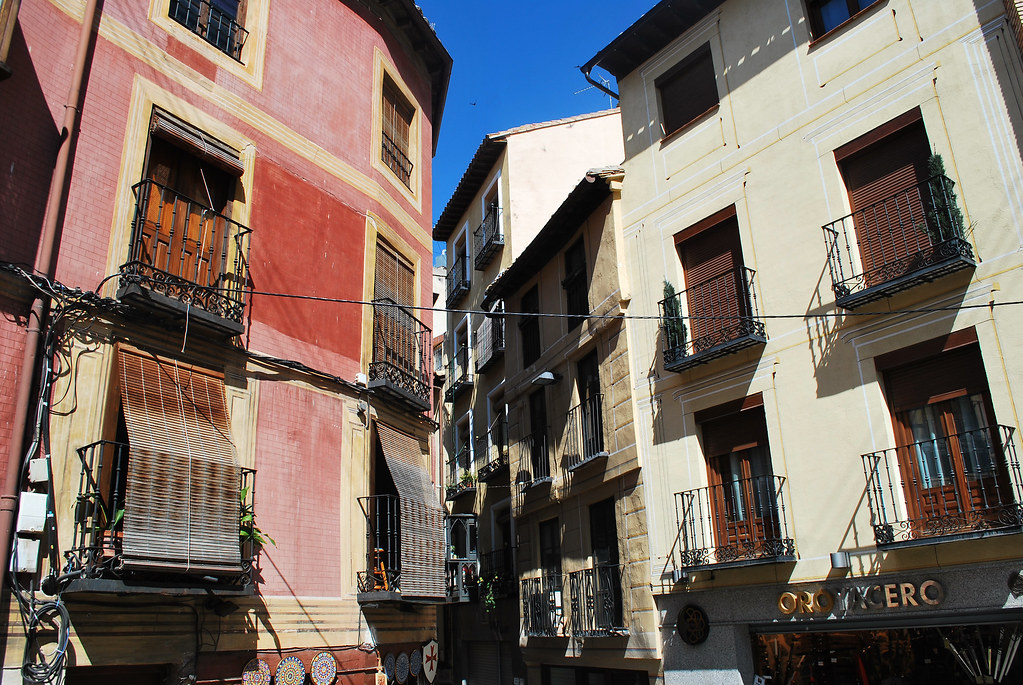 After exploring some of the narrow streets and plazas and successfully avoiding the cars and bikes along the way, we came across the impressive Iglesia de Santo Tome with its high tower.

Venturing south from here you enter the Jewish quarter which is home to some impressive synagogues. One of which was called Sinagoga del Transito and the grounds in front of this give a great photo opportunity of an area called the Cigarrales.

In the Jewish quarter we also had an opportunity to sample one of Toledo’s delicacies.

The town is famous for its almond based products or more specifically – marzipan.

At the furthest point on the west of the old town is San Juan de Los Reyes. This church was built with the intention of it being the final piece of Toledo’s historic jigsaw.

We then retraced our steps all the way back to Plaza de Zocadover. We discovered at this point that we didn’t have to get a taxi up the steep hill when we arrived in Toledo in the morning. 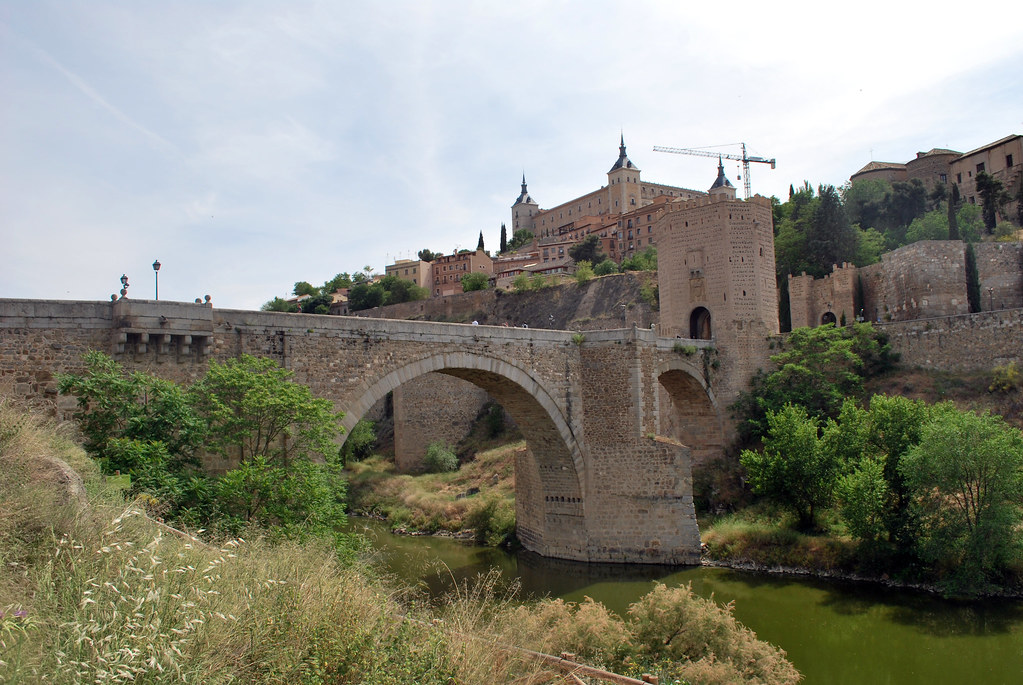 Instead there is a very long escalator which leads you down to the Puente de Alcantara. This impressive bridge takes you across the Rio Tajo and gives you some great views of Toledo.

As we had some time to spare before catching the train back we decided to enjoy two more activities.

Firstly we took a nice river stroll next to the Rio Tajo and next to some interesting abandoned buildings.

Secondly we entered a nice pub next to the bridge for a refreshing ice cold beer. The pub’s walls were decorated with pictures of the local football team Toledo FC.

It was then back to the train station for the short trip back to Madrid.

I really enjoyed Toledo with its medieval buildings and narrow roads. Even though it was heaving with tourists I would definitely recommend a visit to anyone.

2012-05-27
Previous Post: A walking tour of Madrid to see all the main attractions
Next Post: A hot day in El Retiro and Museo del Prado in Madrid