A walking tour of Madrid to see all the main attractions

By: ynysforgan_jack
In: City-break, Madrid, Spain, Travel
With: 1 Comment

After a day of travelling we had a very good night sleep, we only woke to hear some Athletic Bilbao fans returning to the adjoining rooms.

With a continental breakfast settling in our stomachs, it was off onto the metro to make our way to Puerta Del Sol. 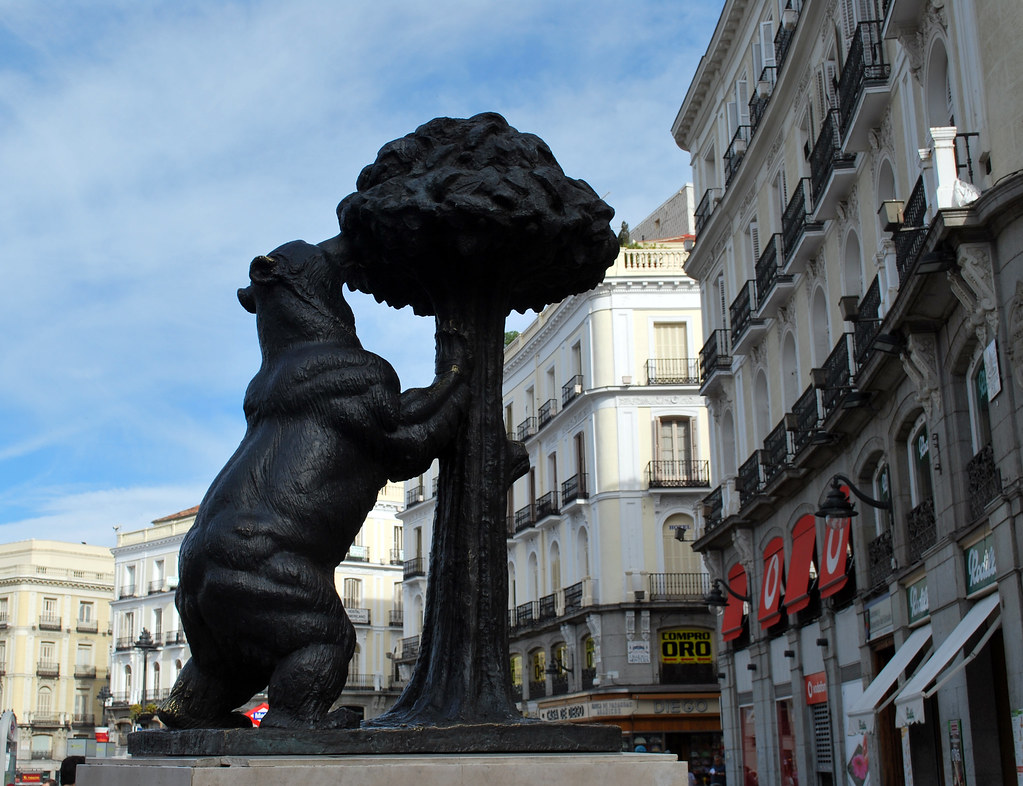 Puerta Del Sol is said to be the very centre of Spain and all highways and routes are measured from it.

This square is also the point where Spain host their new year celebrations. Obviously we were 7 months early for this. D’oh!

As well as the hoards of tourists also present in the square were Micky Mouse, a headless navy captain and Sponge Bob Squarepants. Bob must have fallen into tough times since his TV show finished as he was begging for money.

Along the route is Ignacio San Gines.

This pretty church is one of Madrid’s oldest and is home to some excellent El Greco paintings. 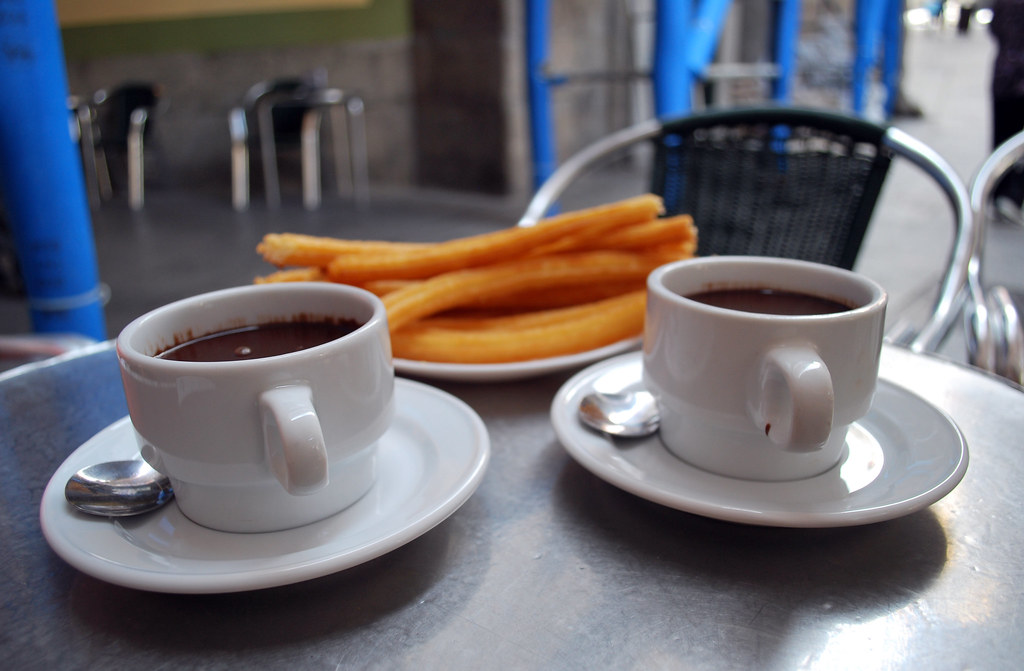 Behind the church is somewhat of a Madrid institution, Chocolateria San Gines who specialise in long strips of deep fried doughnuts, covered in chocolate source.

We ordered two portions but this proved too much for us and we were forced to retire after a meagre four sugary strips each. 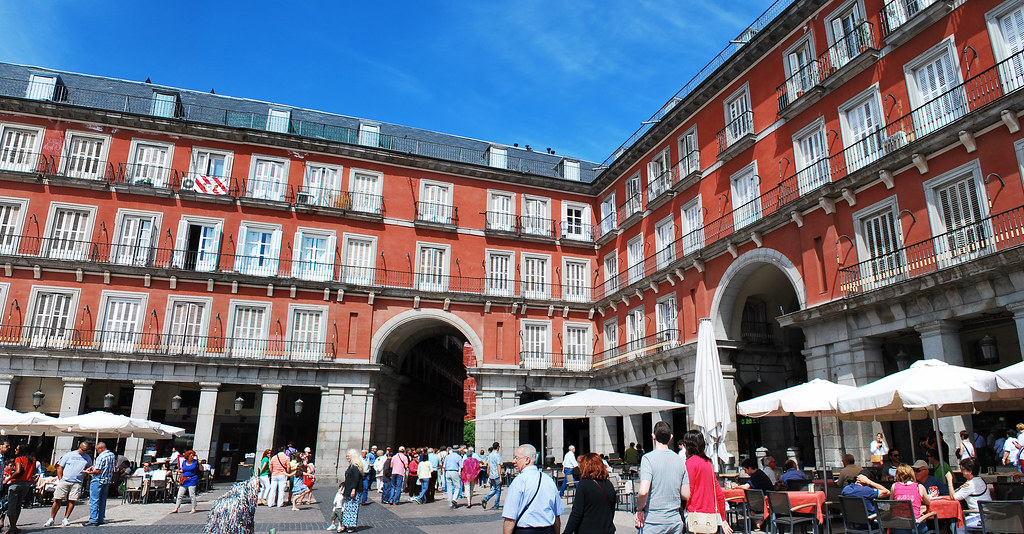 It was then only a short walk to Plaza Mayor, this square is a must visit for any tourist in Madrid as it was formally host to many events such as bullfighting and executions.

Nowadays it is home to many outdoor cafes, bars and some outdoor events. This is in addition to a freaky individual attired like a dog. That is if dogs adorn themselves with tinsel and have a snapping jaw which emits a sound that can only be described as a squirrel with a cold.

The rich chocolate we had earlier consumed had now worked up a thirst, so we stopped for a cold beer on the square with a complimentary tapas consisting of potato, tomato and peppers. We could still hear the ‘dog’ in the background. 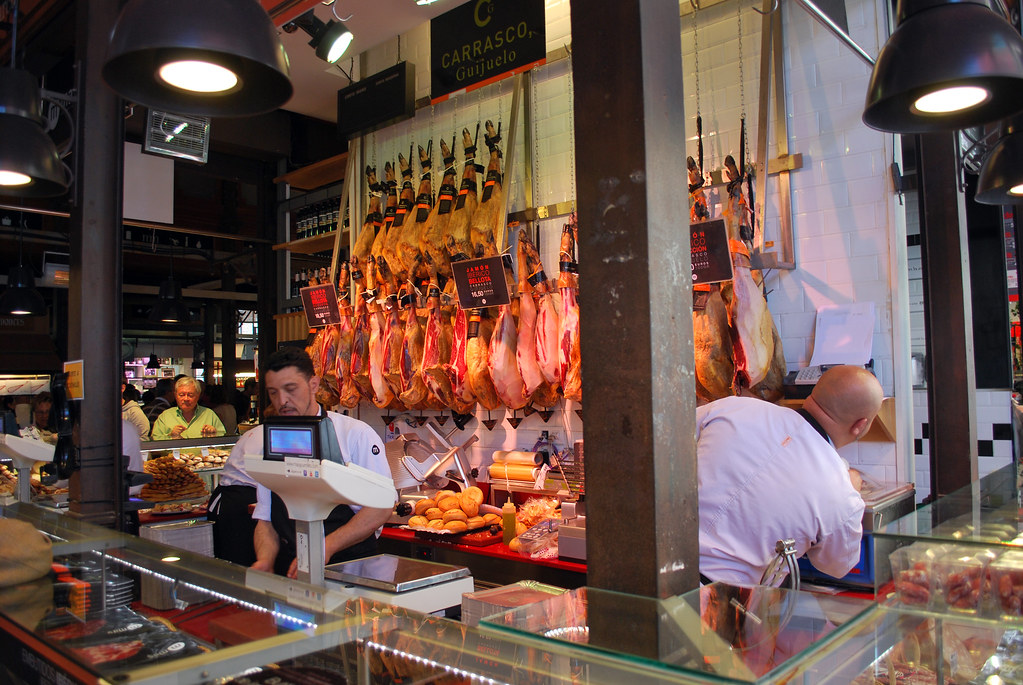 This market is certainly up there with one of the best I have visited. There was a diverse offering of food and drink with varying reasonable prices.

It was a nice touch that when we purchased some Sangria from this market that we were rewarded with some complimentary olives. 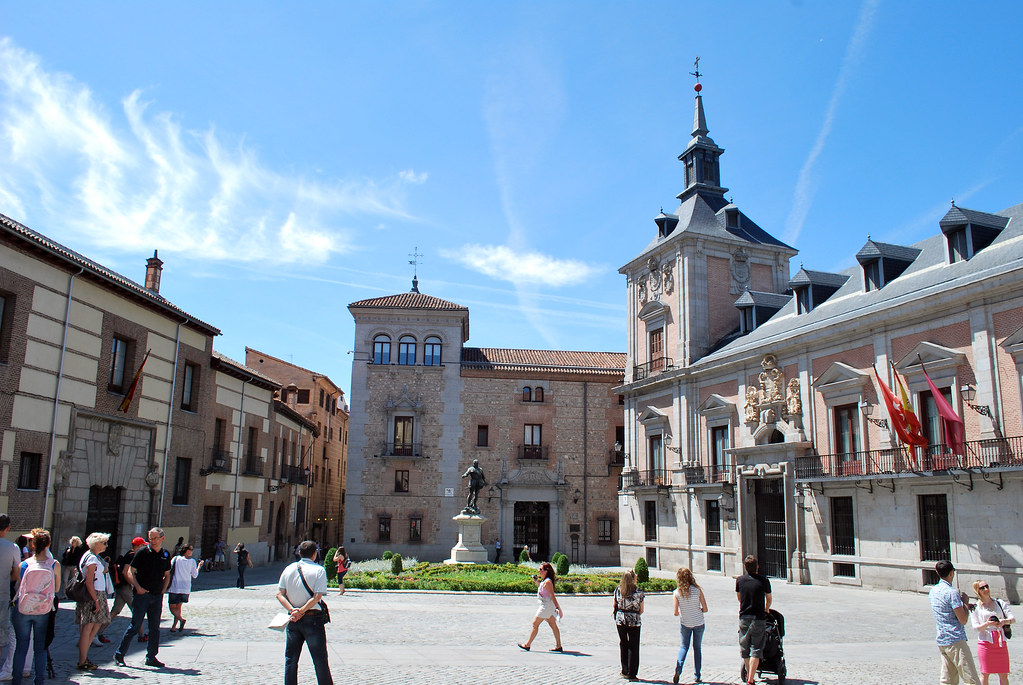 Following the road outside the market we walked through Plaza da la Villa, which is home to some of the cities oldest buildings.

It was also the scene where a random guy took a picture of me rubbing suntan lotion on my cranium.

There are lots of narrow cobbled streets leading from this square and we followed one to Iglesia De San Pedro El Viejo.

The main feature of this 15th century church was its Mudejar Tower. 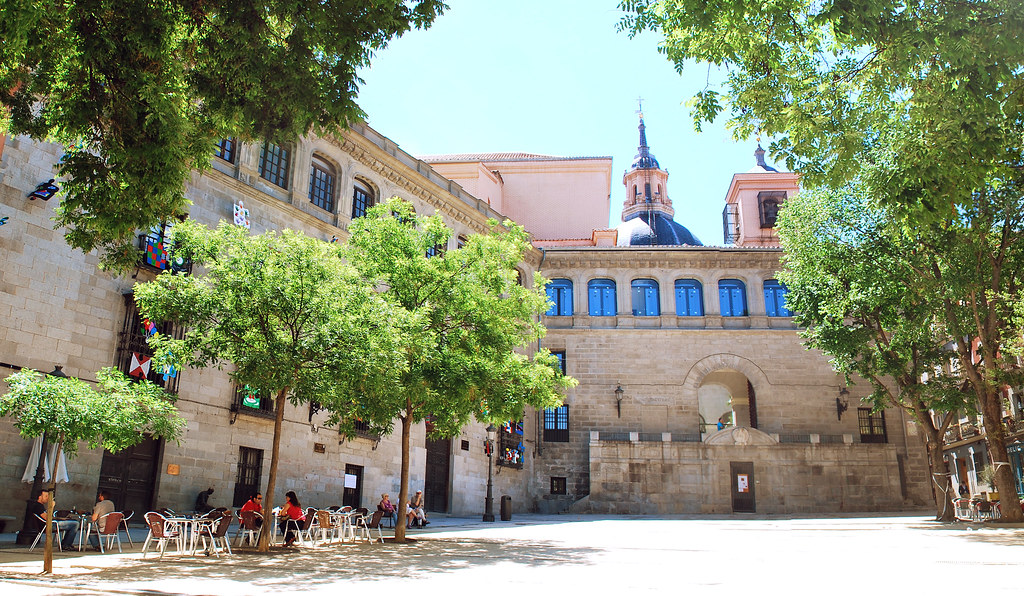 A short walk from here is a small square called Plaza de la Paja with a church sitting at the centre of it. We took a seat for a while here to enjoy the sun.

Meanwhile my girlfriend was taking pictures of a mural on the wall, when I asked why she was doing this she replied “I thought it was real”. Bless her.

We then walked down to Calle de Bailen which has a number of Madrid’s main tourist attractions situated on it. 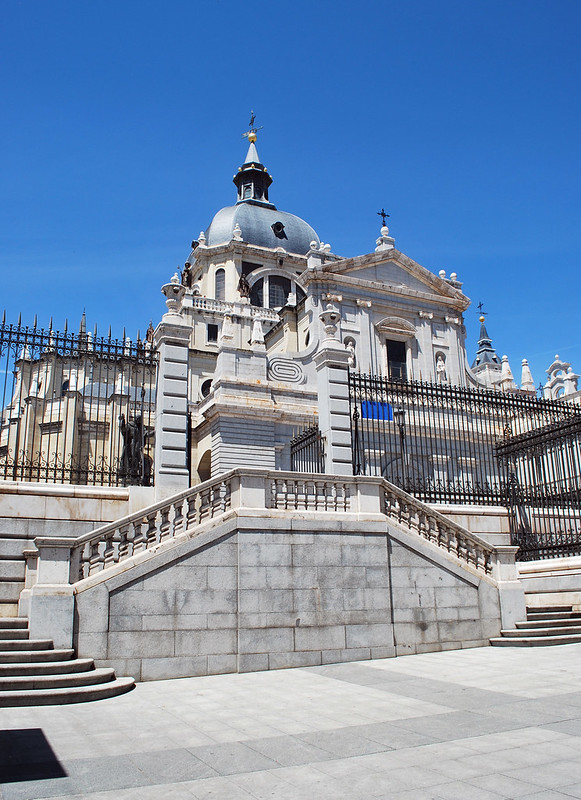 The first sight on this road was Catedral de Nuestra Señora de la Almudena. Apparently you can climb to the roof of this cathedral, but unfortunately as a service was taking place it was not possible. 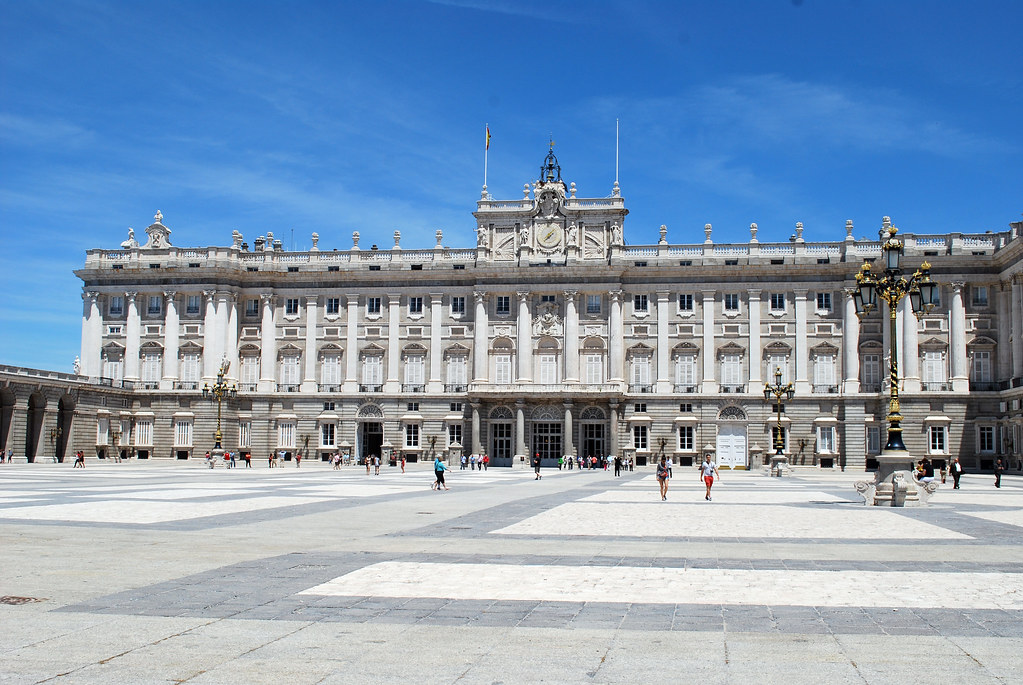 Next door to the cathedral is Palacio Real or the Royal Palace in English. This was the former home to the Spanish Royal Family but is now only used for ceremonial occasions. 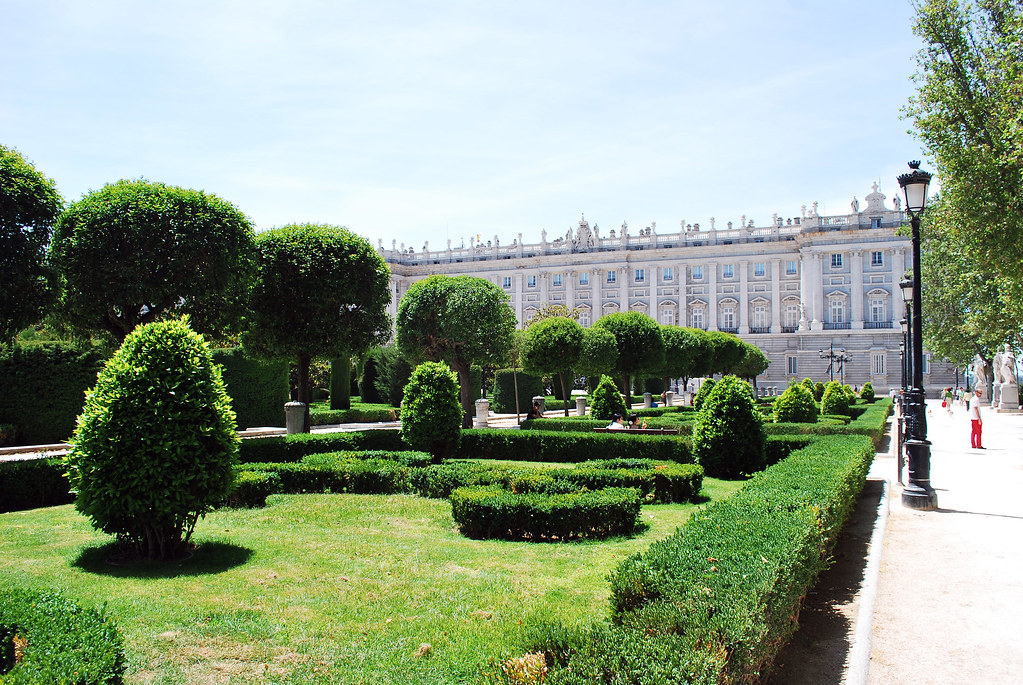 Directly opposite the palace are some gardens called Plaza de Oriente. In here are a number of statues to the kings of old. Legend says that the statues step down from their stands to exercise at night.

After spending quite some time walking around Madrid we obviously needed another beer. So we found a nice bar with outside seating and we sipped our pints while admiring the view of Plaza de Oriente and the Royal Palace in the background.

As we were walking towards our next destination we were approached by a lady in her twilight years shouting what sounded like “massage, massage” before she tried to perform a Spock style death grip on my shoulder. Luckily I escaped. 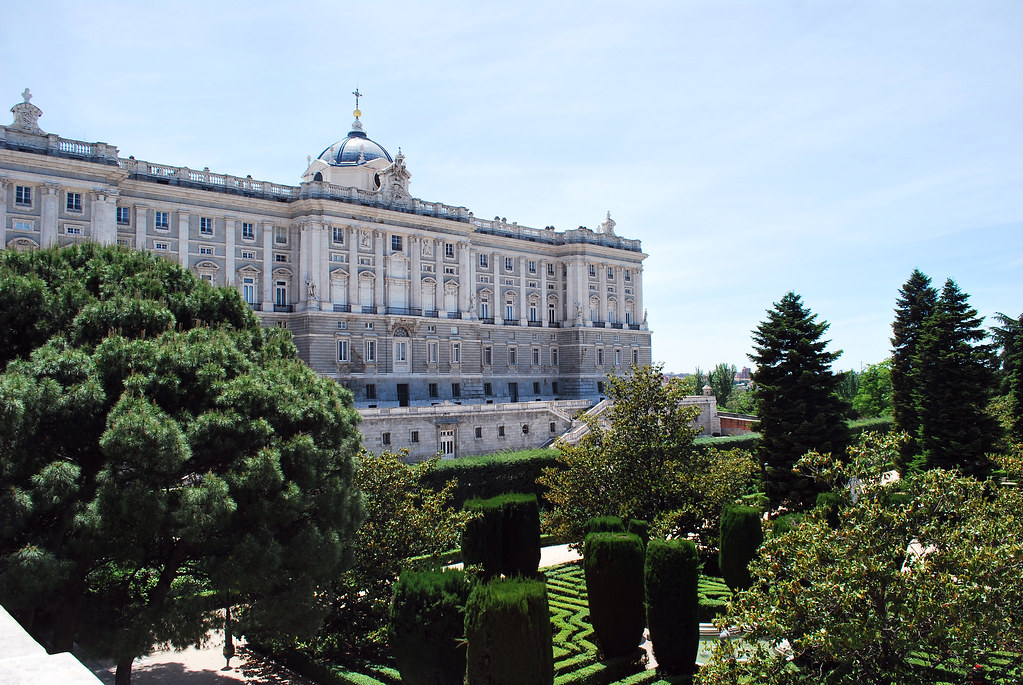 Our next stop was Jardines de Sabatini. This is a small park directly behind the Royal Palace was complete with fountains, statues and ponds. 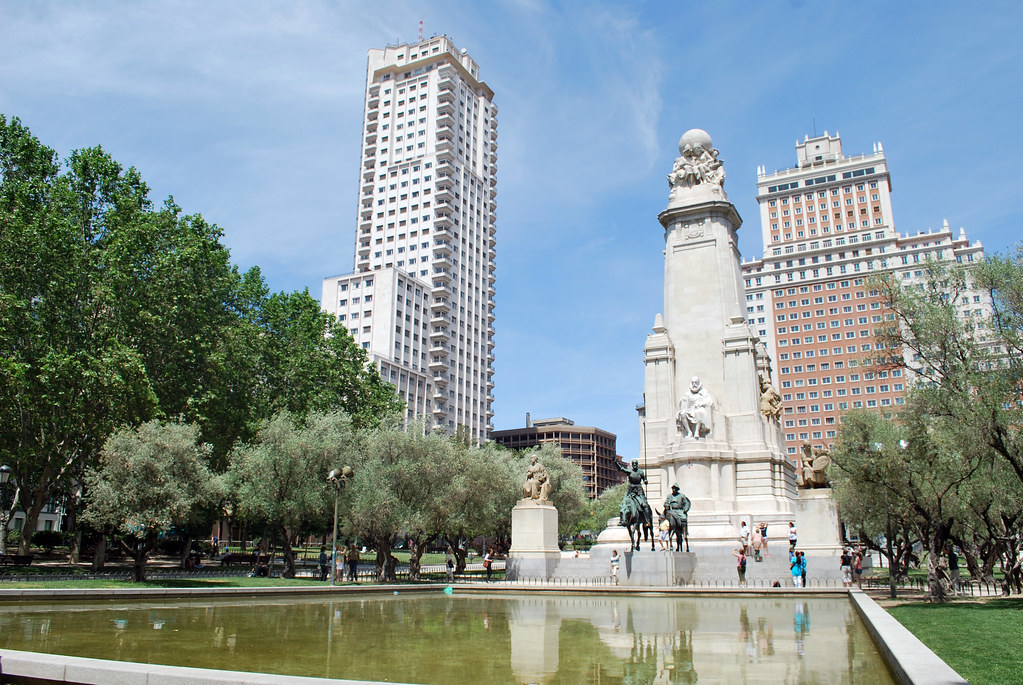 From here we walked the short distance to Plaza de Espana while overtaking a few vagrants of Madrid.

Plaza de Espana is a small park overlooked by two skyscrapers. In the centre of the park is a monument to Cervantes which looks like it takes up most of the space in the grounds.

Looking at some of the folk who were heading here I can see why the Lonely Planet guide suggests avoiding it after dark. 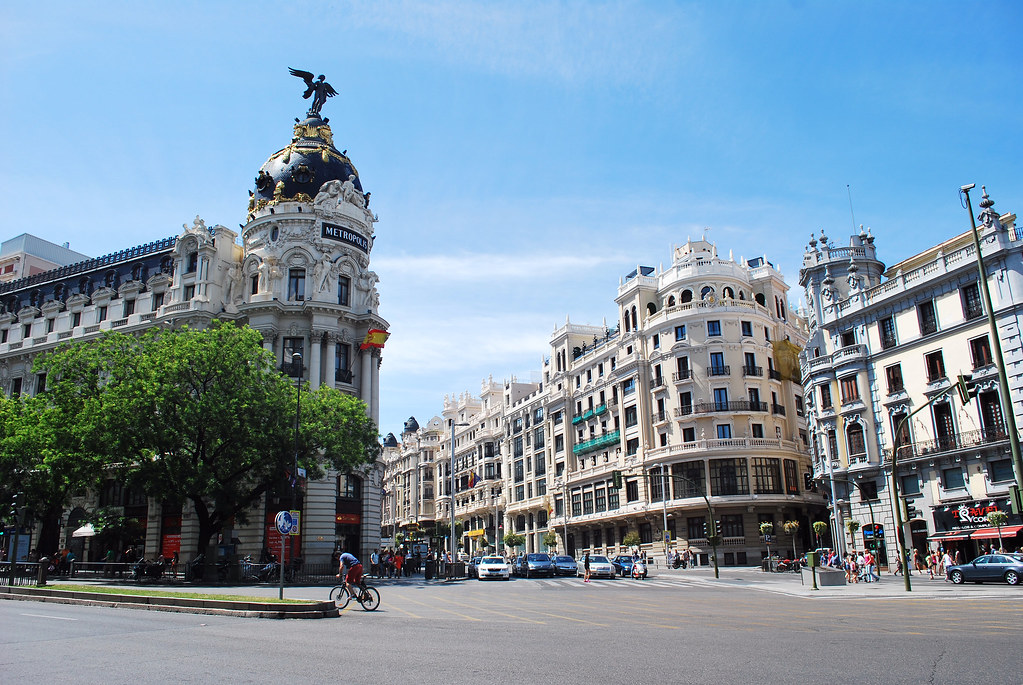 On the south east corner of this park is the start of Gran Via.

Gran Via is a boulevard that consists of the usual chain shops and restaurants such as Lacoste (which I stopped Hayley going in) and TGI Fridays.

The main sites of Gran Via are the facades of the buildings above the shops and the Metropolis building. 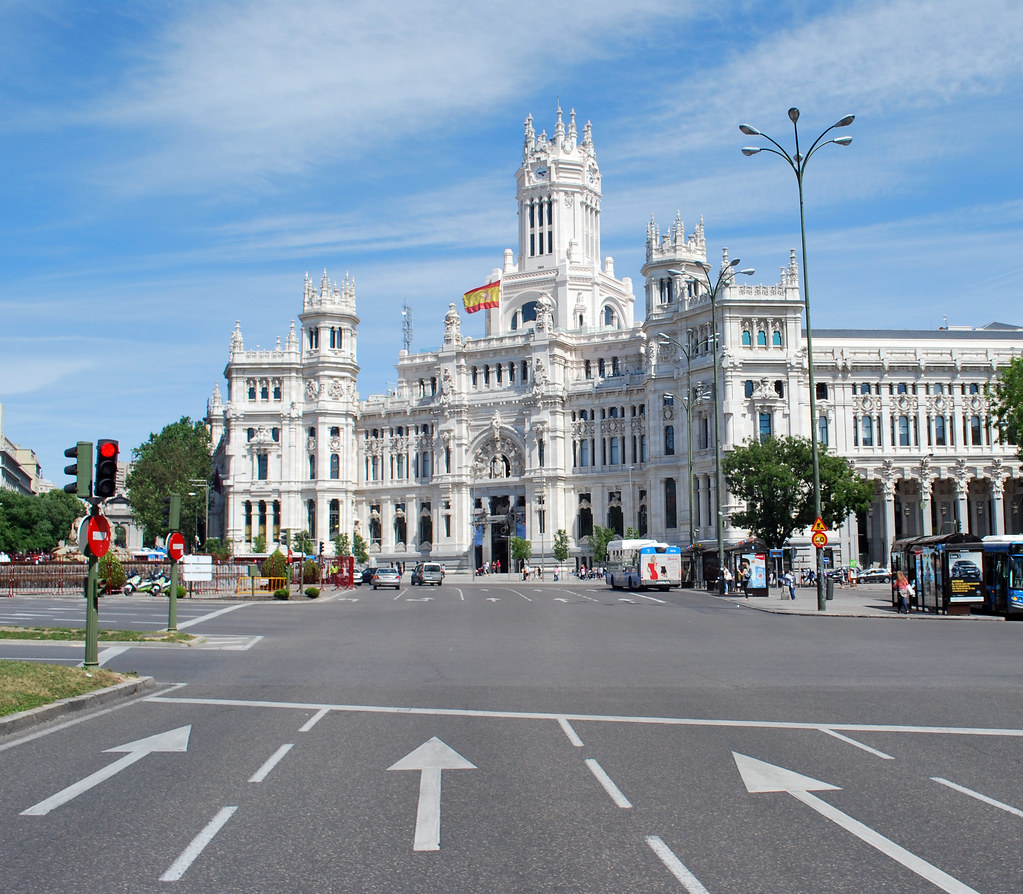 We then walked over to our final attraction of the day called Palacio de Comunicaciones. This impressive building is seemingly located on one of Madrid’s busiest roundabouts. So we had to time the photo opportunities to the sequence of the traffic lights. 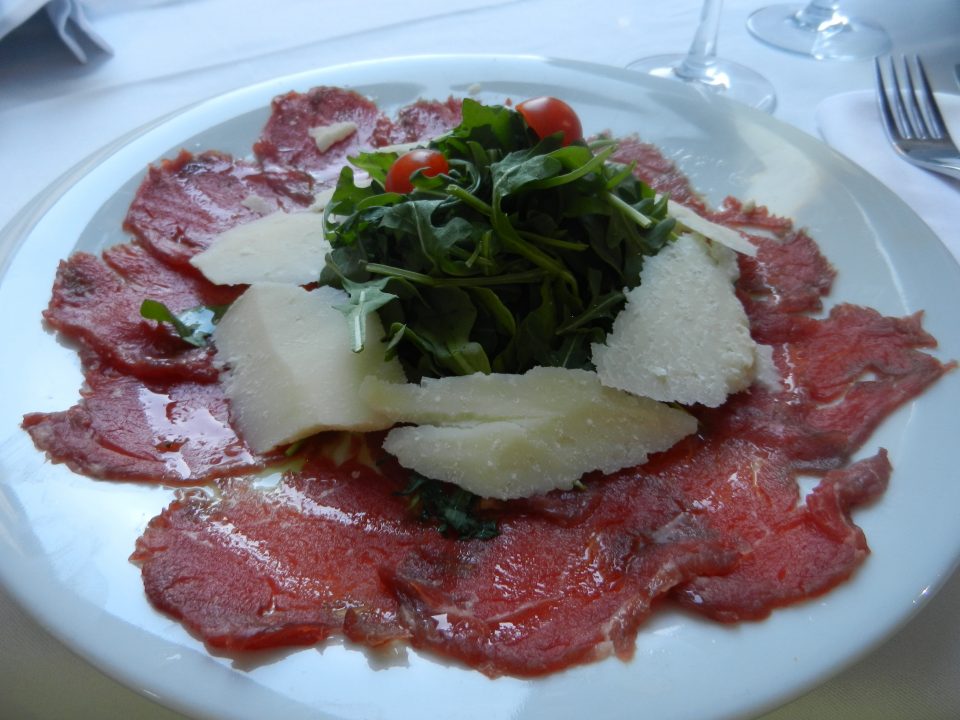 We were still in central Madrid with the time rapidly approaching 17:08. We decided to look for something to do before our evening meal. Guess what we did?

If you said “Gareth I bet you went for a pint to pass some time” then you would be correct.

It seems the later it is, the busier Madrid gets. After an intensive 90 minute search for food we came across a restaurant called Kitchen Stories just off Plaza Mayor. It specialises in Spanish fusion.

I opted for some cured beef with Parmesan cheese while Hayley chose noodles with mushrooms and chicken.

We then went back to the hotel after a 14 hour stretch wandering the streets of Madrid. Time to get some rest before our trip to Toledo tomorrow.