We had a great day in Prince Rupert, British Columbia. There was a lot to see including Cow Bay Marina, the Museum of Northern British Columbia and of course the city-centre itself.

When we woke up, we were still tired after the long but amazing journey on Canada’s Inside Passage. My hotel room was quite high up, and as I spent most of yesterday above deck with the landscape moving past me, it felt like the window in my room was doing the same thing! Dizzy isn’t the word!

After some nice breakfast at the hotel, we set out to explore Prince Rupert, British Columbia.

When researching Prince Rupert, either online or through guidebooks, it was evident that the city has a reputation for rain. A reputation well deserved as apparently, as it rains over 200 days a year. Although it wasn’t raining when we set out.

Prince Rupert seems to focus on being a transport hub and is growing as a tourism destination. Around 12,000 people call this port city home. 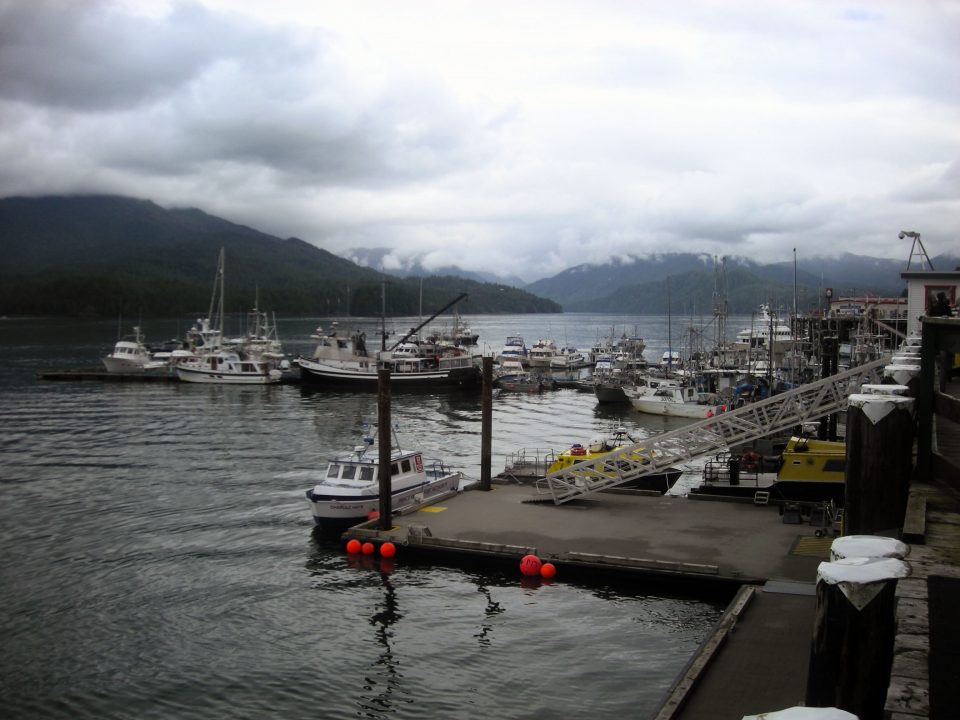 Our first stop of the day was Cow Bay Marina. Cow Bay seems to be the focus of attention for tourists to Prince Rupert. We had a pleasant walk around here and appreciated the view of the landscape and the marina.

I noticed that shops, bars and businesses really play on the cow theme with spotted cow decor on display around the area.

Walking around Prince Rupert, I couldn’t help but notice the number of eagles around. They seemed to be either perched on boat masts or flying around the waterfront.

Perhaps they were waiting for fishing boats to return to the marina to try and get some lunch?

Some of the locals were surprised that we were interested in photographing the eagles. We obviously don’t get these creatures back in Swansea!

Built in the style of an aboriginal longhouse is Prince Rupert’s Museum of Northern British Columbia.

I was fascinated by this museum which tells the story of the indigenous civilisations of the Pacific Northwest Coast. There are thousands of items on display including art, masks, Totem poles, sculptures, clothing and jewellery.

We then walked into Downtown Prince Rupert to see what the city had to offer. There were fantastic totem poles on display which really added to the intrigue of Prince Rupert.

In the main square is a statue of Charles Melville Hays. He was the founder of Prince Rupert, British Columbia and the manager of the Grand Trunk Pacific Railway. He was one one of the unfortunate souls who died in 1912 on the RMS Titanic.

We really enjoyed our day in Prince Rupert. This wonderful port city certainly has a lot to offer, I just wish that we had some more time there to really discover more about the area.

2007-07-06
Previous Post: Canada’s Inside Passage cruise from Port Hardy to Prince Rupert
Next Post: Driving from Prince Rupert to Smithers, BC