Our first day in Seville, or Sevilla as it’s known to the locals, involved us visiting some tasty food markets, El Centro and Metropol Parasol.

The trip started with disaster though. Two members of our party had to pull out of the trip only minutes before arriving at the airport.

With it now being just myself and the wife, we boarded the plane and made our way to Seville.

The taxi ride to our hotel was quite hellraising as the driver weaved in and out of traffic and took corners at high speed.

Once we checked into our hotel we set out to explore the city of Seville. 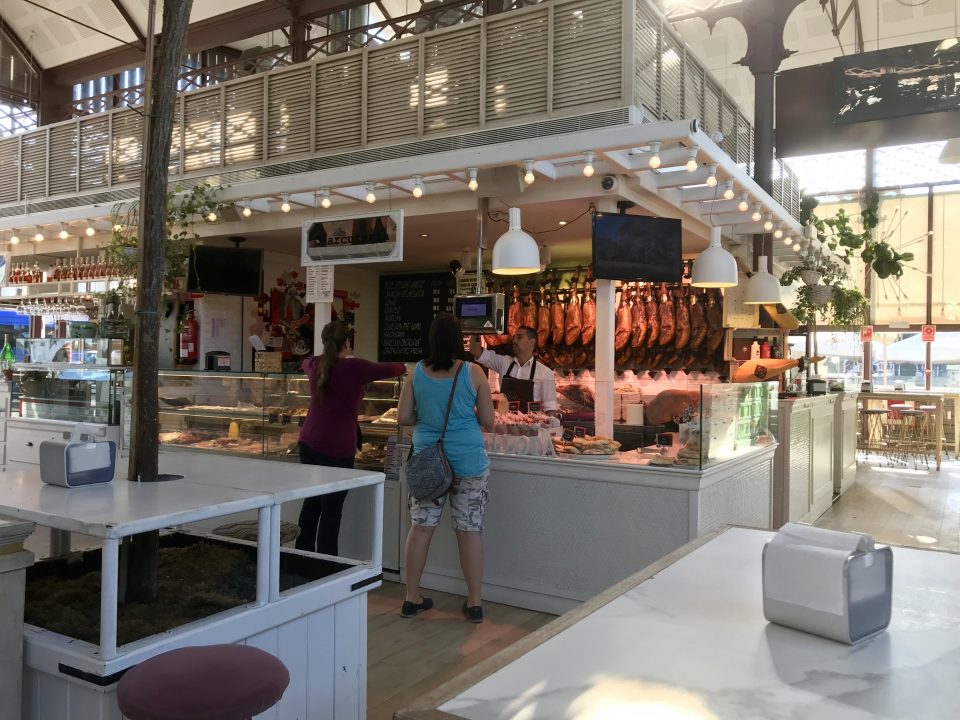 We were quite hungry after our early morning flight, so we made our way to Mercado Lonja del Barranco for a bite to eat and a strong coffee.

This market is full of mini eateries and bars offering fare such as jamón, salads, seafood, paella, deserts, wine, beer and sangria. I was surprised that the wife didn’t ask for some sangria despite it being 11am. I assumed she would hold out for another 32 minutes.

Once we had a look at the stalls, we opted for a jamón sandwich and some mini chorizo – very nice indeed! 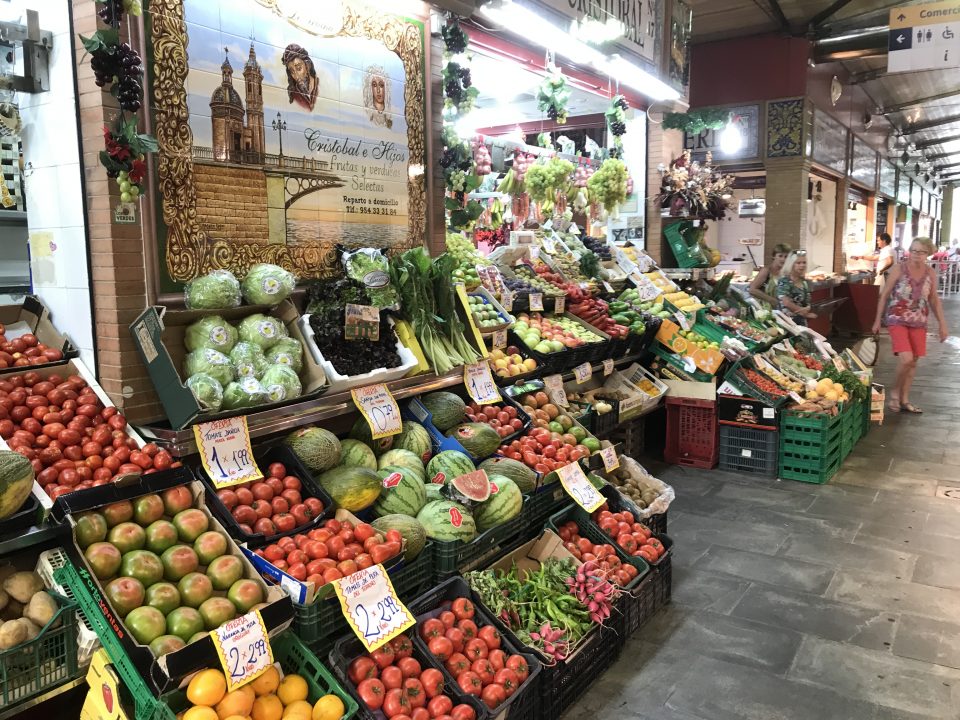 Just across Puentede Triana is Mercado de Triana. Another market already I hear you ask? The simple explanation is that it was the first thing we came across over the bridge. It would be rude not to go in!

We found this to be a different type of market to the one we visited across the river. It was more of a fresh food market with vegetables, meats and cheeses on offer. It reminded me a little of San Miguel Market in Madrid.

The stalls were quite unique in that they have their name in blue tiles above them. I thought that this really added some character to the place. I also noticed that there were more locals doing their shopping here too.

My wife only thought this market was more noticeable due to the fact I nearly fell down the escalator, twice! Not very nice is she? 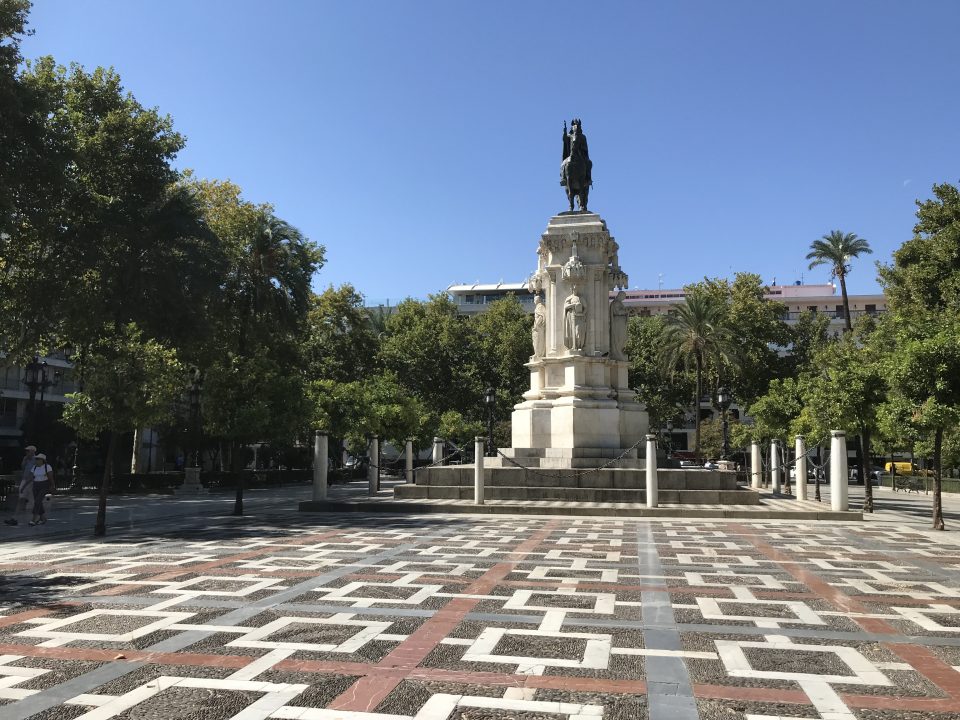 The temperature was rising steadily as we made our way through the narrow Seville streets to Plaza Nueva. Most of the streets had sheet coverings, probably to protect the public from the harsh sun.

Plaza Nueva backs onto Seville Town Hall and is dotted with trees around the edge.

We tried to take a rest here but it was so hot that the metallic benches burnt our bums. Ouch! 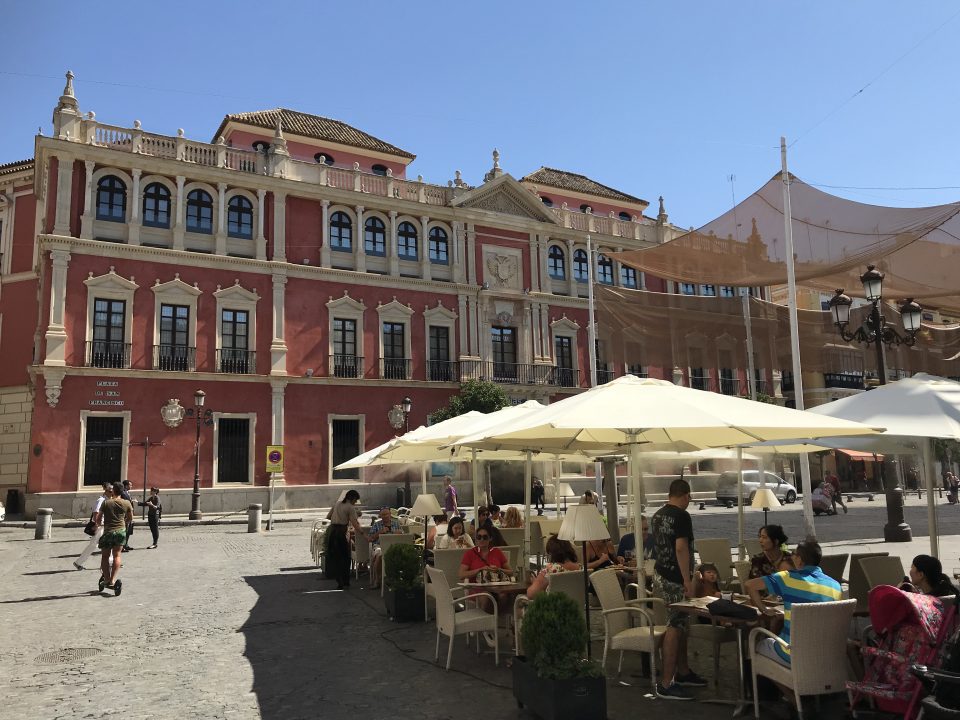 Just behind the Town Hall is Plaza de San Francisco. This 16th century square is considered to be Seville’s main square and is home to the Bank of Spain building.

We sipped a beer here whilst watching the world go by, during which the cafe umbrella squirted us with cooling water. Pity it didn’t get rid of the annoying flies. 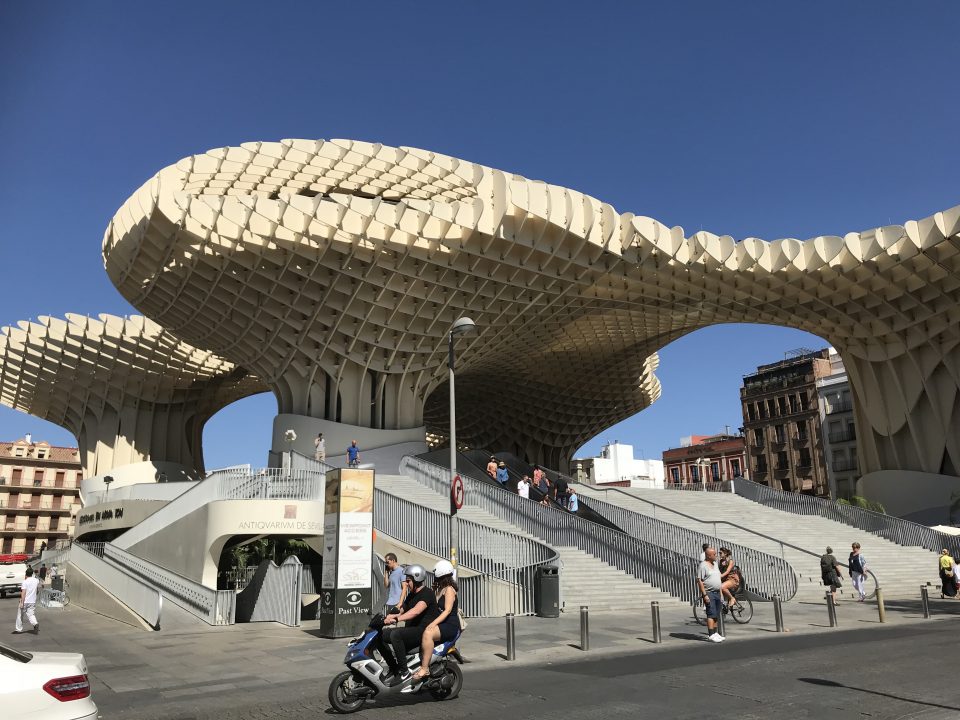 It was then onto the highlight of our day – Las Setas De Sevilla, also known as Metropol Parasol.

This controversial monument was built in 2011 and is constructed completely out of wood, which resembles honeycomb.

We parted with €3 each to access the second floor where we strolled along a walkway which gave amazing views of Seville.

With no cover on the roof we both agreed it was the hottest we’d probably ever been. As well as surviving the harsh sun, we had to avoid a flying drone operated by a lousy pilot!

Downstairs is a small market but after visiting two others today we decided against popping in. There’s also some Roman ruins in the basement. 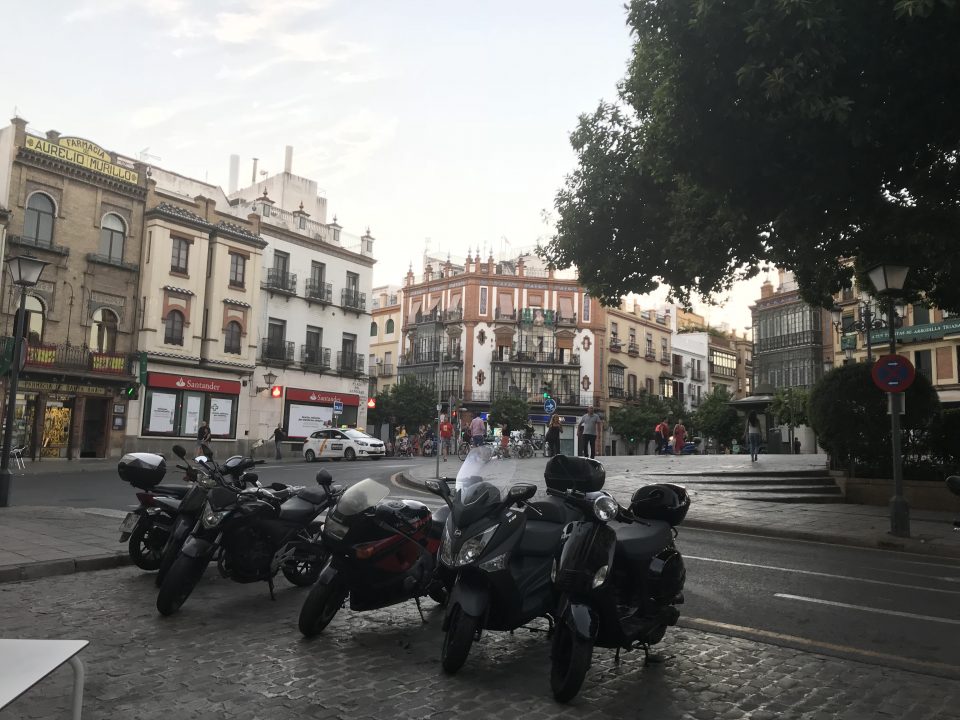 Worn out with the heat we headed back to the hotel for a rest and to get ready for an evening out.

We headed to the Triana District for a walk. This district has streets full of little restaurants and bars. We joined the throngs of locals and tourists in one such establishment for a quick glass of Rioja. Cheers! 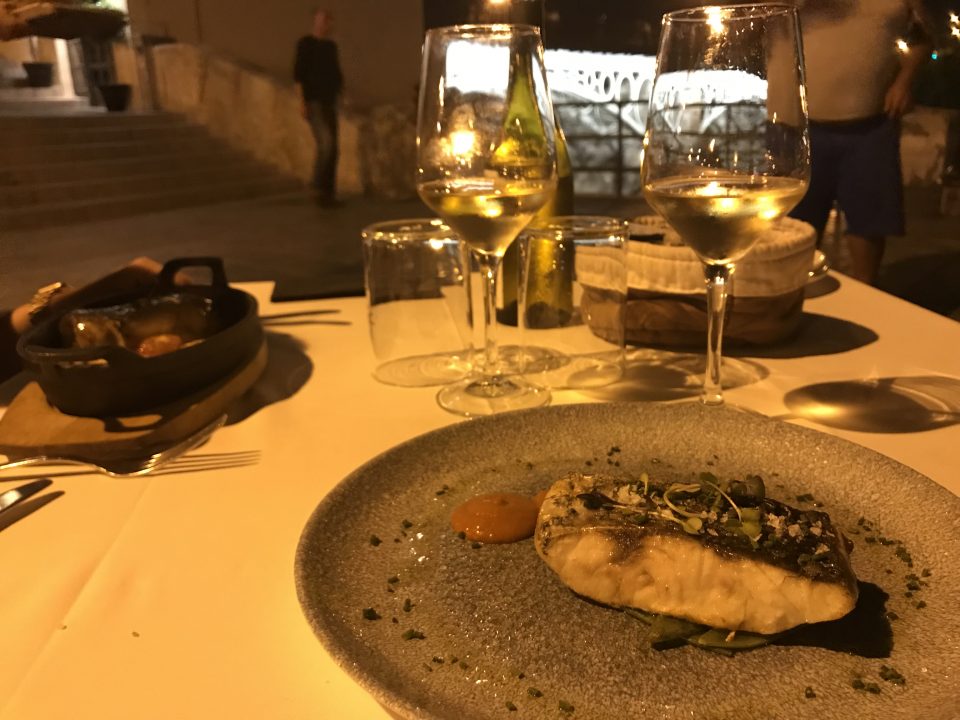 For our evening meal we decided on Mariatrifulca Restaurant just in front of the river. I opted for corvina fish with sugar snap peas while Hayley decided on chicken with lemon and thyme.

There was some pre-meal drama too as a wedding photo shoot stopped suddenly when the mother of the bride suffered a fall and an ambulance turned up.

Our meal was delicious, if a little small, but the views were amazing.

The meal rounded off our first day brilliantly in Seville. We are off to Cordoba tomorrow but I can’t wait to see more of Seville on Thursday.