With a thunderstorm overnight, that we completely slept through, it was the first time we saw Toronto overcast. So it would be cooler to walk around.

This didn’t stop the humidity however when travelling around the city. 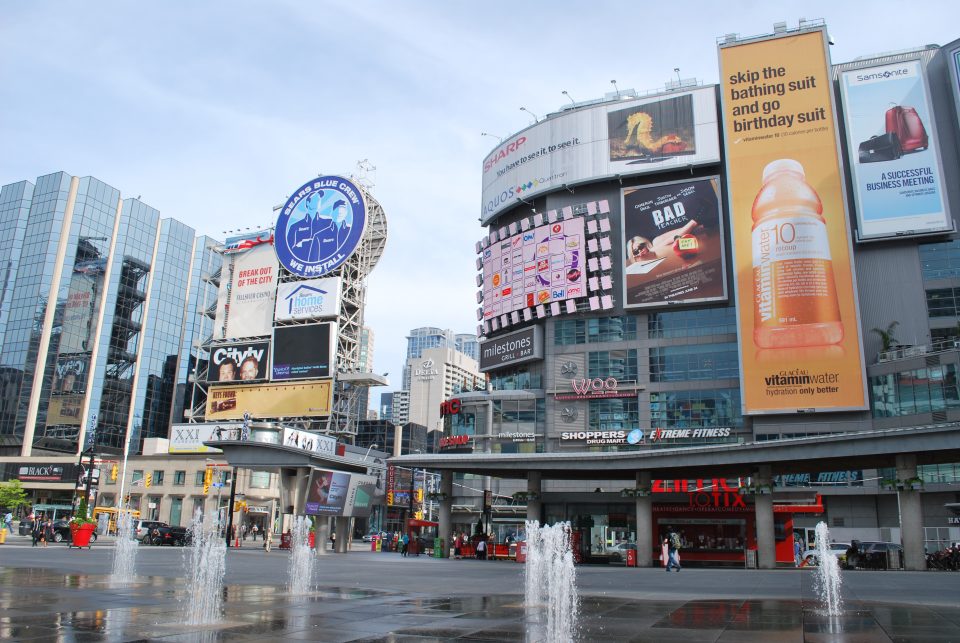 After a quick breakfast in Tim Horton’s our first port of call was Dundas Square.

This public space seems to be a mini version of Times Square, complete with luminous advertising hoardings, skyscrapers and water fountains. 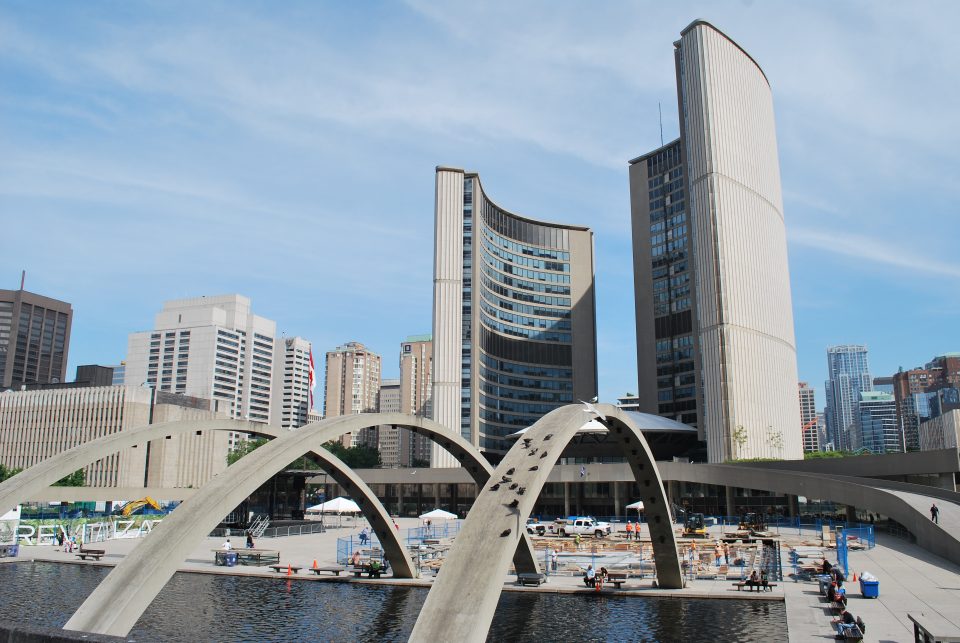 A block over is the new City Hall and the old City Hall. It was interesting to see two contrasting buildings situated next to each other.

The old City Hall has a central clock tower and is of traditional architecture.

The new City Hall is of modern design with twin buildings in semi circular shape facing each other. It kind of looks like a UFO.

My girlfriend was then nagging to go shopping so we walked into the Eaton Centre. It’s a huge selection of shops and eateries over four floors. My idea of hell.

With a purchase from the Lacoste shop thankfully complete it was time to visit Chinatown. 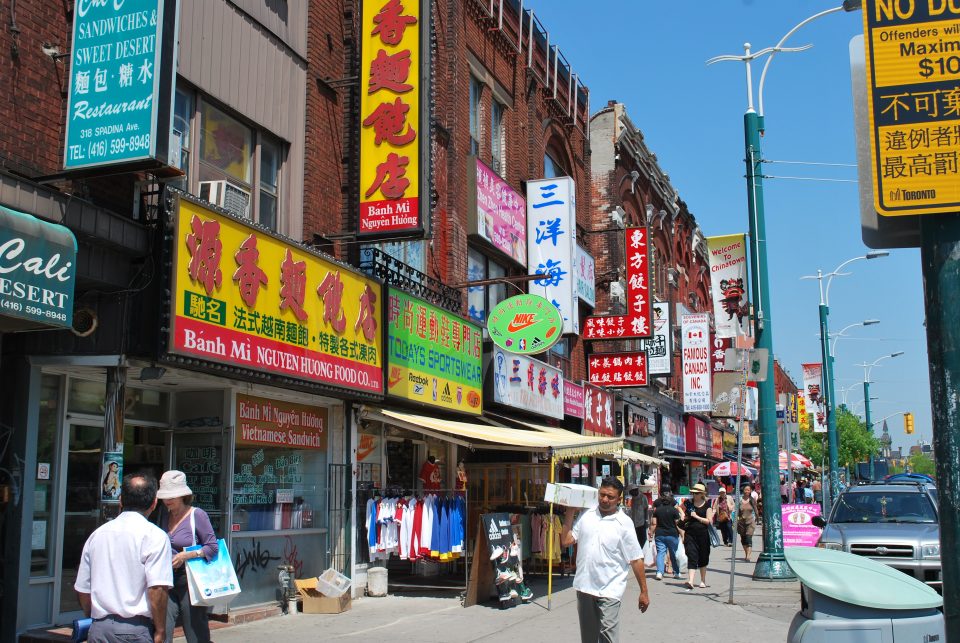 On the way over to Chinatown the sun decided to come out which put the temperature up to 28.23c.

If the name doesn’t give it away, Chinatown is a district of Canada where a large population of Chinese people reside.

Shop fronts, restaurants, homes , signs and businesses are all of oriental design and lettering.

It’s here that we decided to partake in some lunch. On the advice of Lonely Planet we visited Dumpling House Restaurant, famous for its Chinese dumplings.

We opted for fried pork and chive dumplings with chicken fried noodles in soy sauce. With it we had a complimentary herbal tea.

The meal was excellent and with our hunger quelled we continued to explore Chinatown. 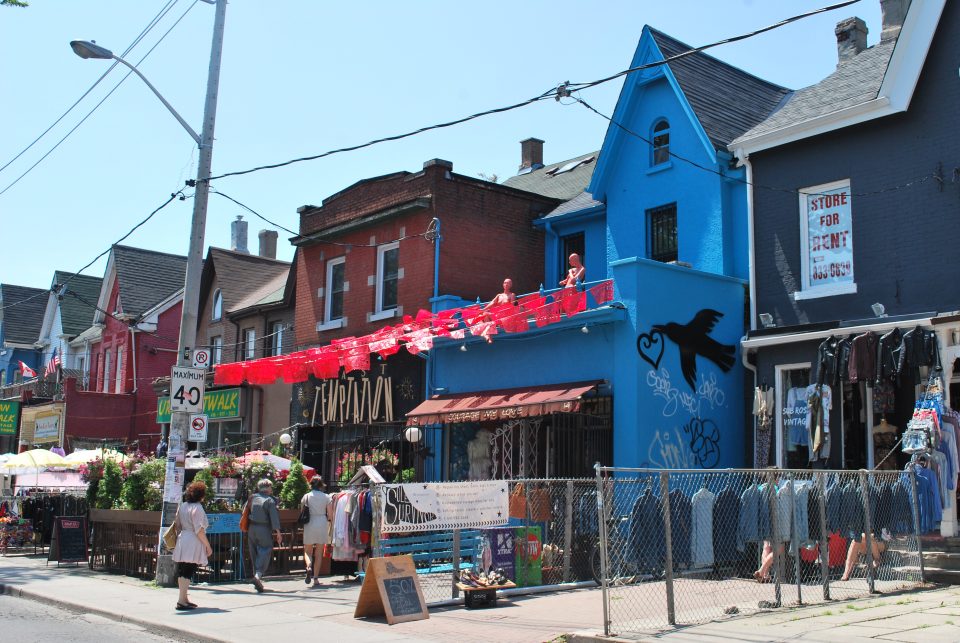 Adjacent to Chinatown is Kensington Market. This is one of Toronto’s more “colourful” districts with shops decked out in hippy style colours and interesting graffiti sprawled across some of the buildings. 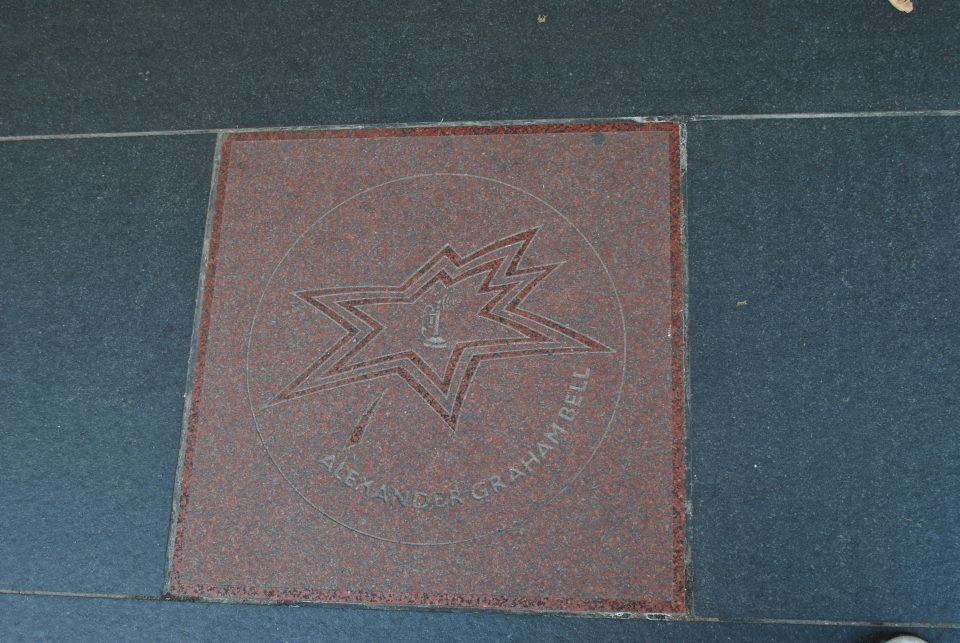 Back in downtown I thought I was safe from any more shopping. I was wrong – I was forced to go around the Hudson Bay Company department store.

When this ordeal was finally over the Canadian Walk of Fame was next on the agenda.

These are red stars set in the pavement dedicated to Canadian stars, even though some do not hail from Toronto. Jim Carrey and Alexander Graham Bell were arguably the most notable. While Swansea celebrity Mal Pope and Arfon Haines Davies were sadly absent. 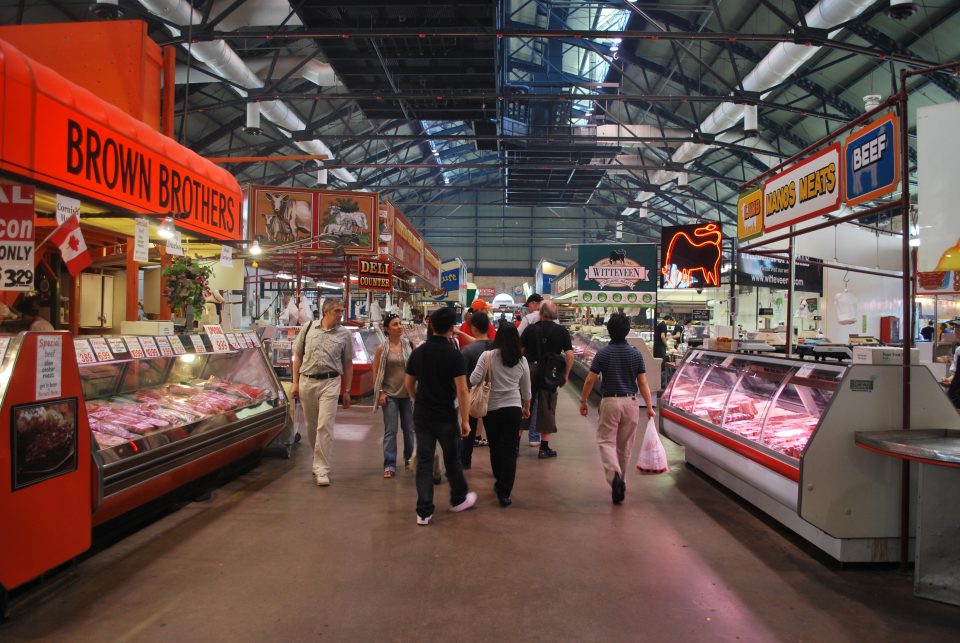 Next up was a trip to St Lawrence Market. It hosts many varieties of food stalls including cheeses, bakers, fish, meats and wines.

The wine was all local to Ontario and the Niagara Peninsular. We purchased a white wine to sample back at the hotel. 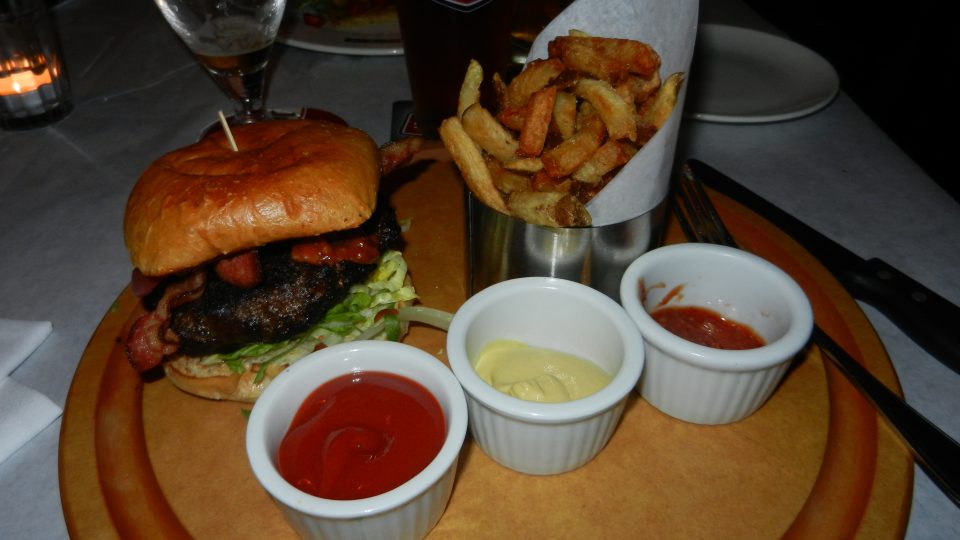 With the wine ingested it was time for the evening meal. We decided to pay a visit to Bier Markt. This venue hosts 100 different beers from 24 countries (but no Albright). A reward to yours truly after suffering the indignity of shopping earlier.

I opted for a pint of Jupiler from Belgium, mushroom broth for starters and a T-bone burger for main.

The pint and starters were excellent. I then awaited the main course.

I became slightly concerned when our waiter brought me a bread knife and informed me “your t-bone burger isn’t tough but it’s quite tall, you may need this to carve it”.

What was delivered to the table was worse than 8,002 trolls. It was a burger twice the height of the CN Tower and the width of Toronto to Narbeth. Ok maybe I’m slightly exaggerating.

I had to order a pint of Okanagan Pale ale to prepare me for battle. I’m pleased to say that I triumphed and the burger was consumed eventually. Although big, it was delicious.

However some fries decided to take advantage of my dire situation and defeated me. Television show Man v Food would definitely frown upon me.

A day of walking will have to take place tomorrow to work of the gargantuan burger that was consumed.