Coimbra is Portugal’s famous old university town. And it was the next place for us to visit on our expedition.

We were sorry to leave Lisbon but we’ll be back there later this year. But the prospect of visiting Coimbra was very exiting. 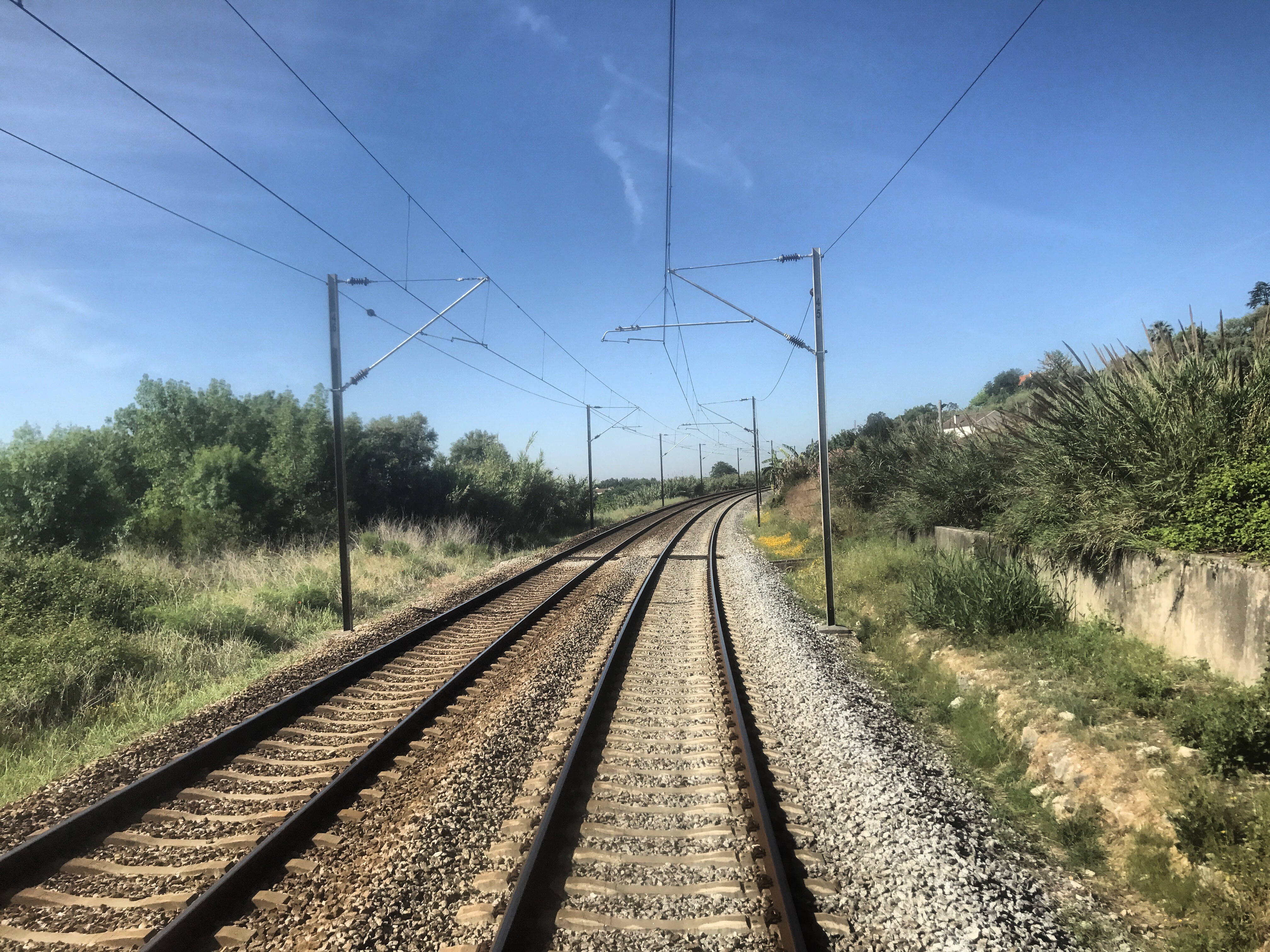 We made our way to Lisbon’s Oriente train station and boarded the 9:39am train to our destination. That is after we’d devoured a delicious Portuguese custard tart in a nearby cafe.

The journey took 1 hour 30 minutes and was completly uneventful. The scenery was nice but unremarkable.

Once we arrived at the hotel we quickly set off to explore the city. 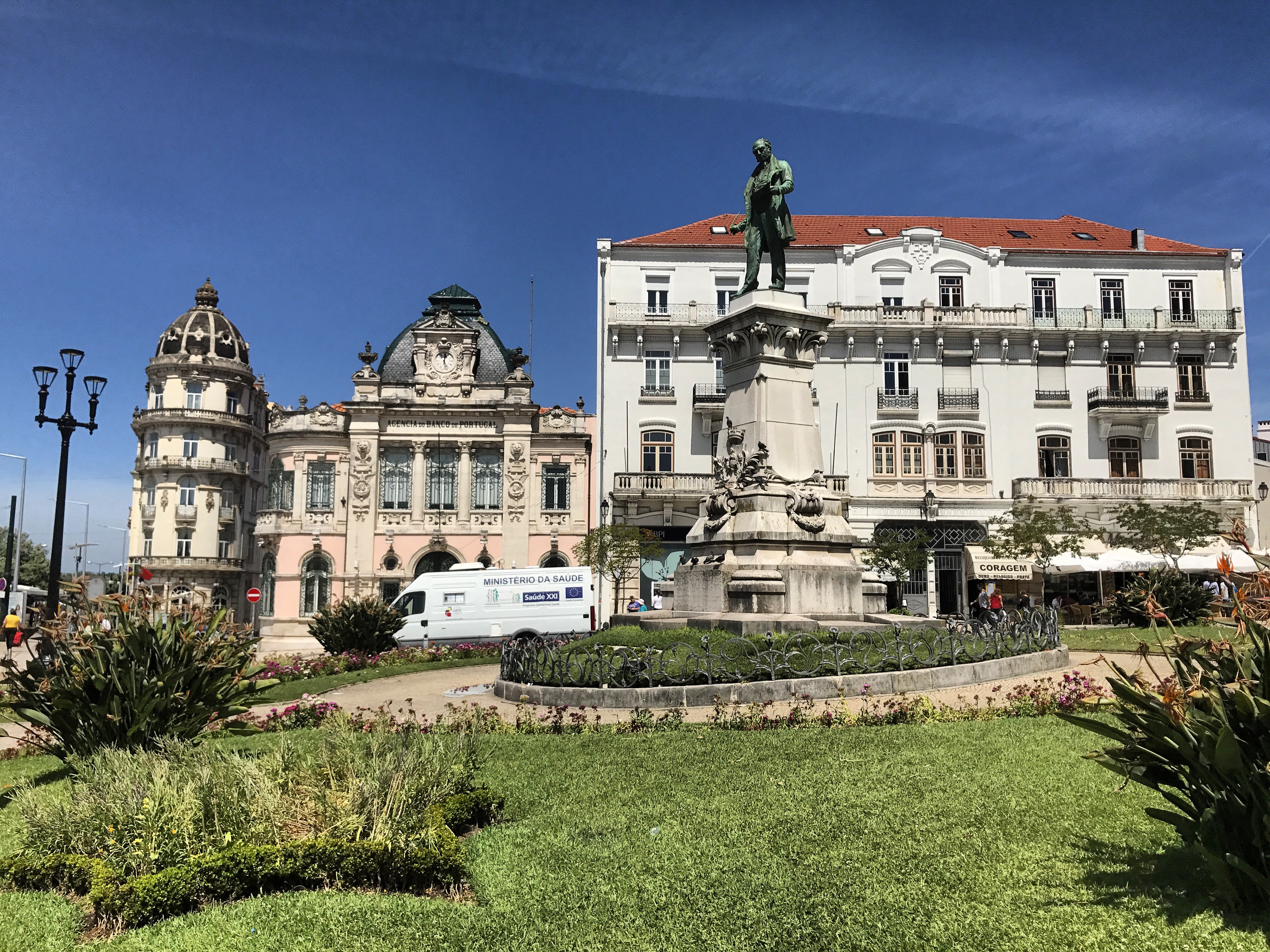 Our hotel was right next to Largo da Portagem, a small green square flanked by gorgeous buildings. In the centre is a monument dedicated to Joaquim Antonio de Aguiar, a former Portuguese politician. 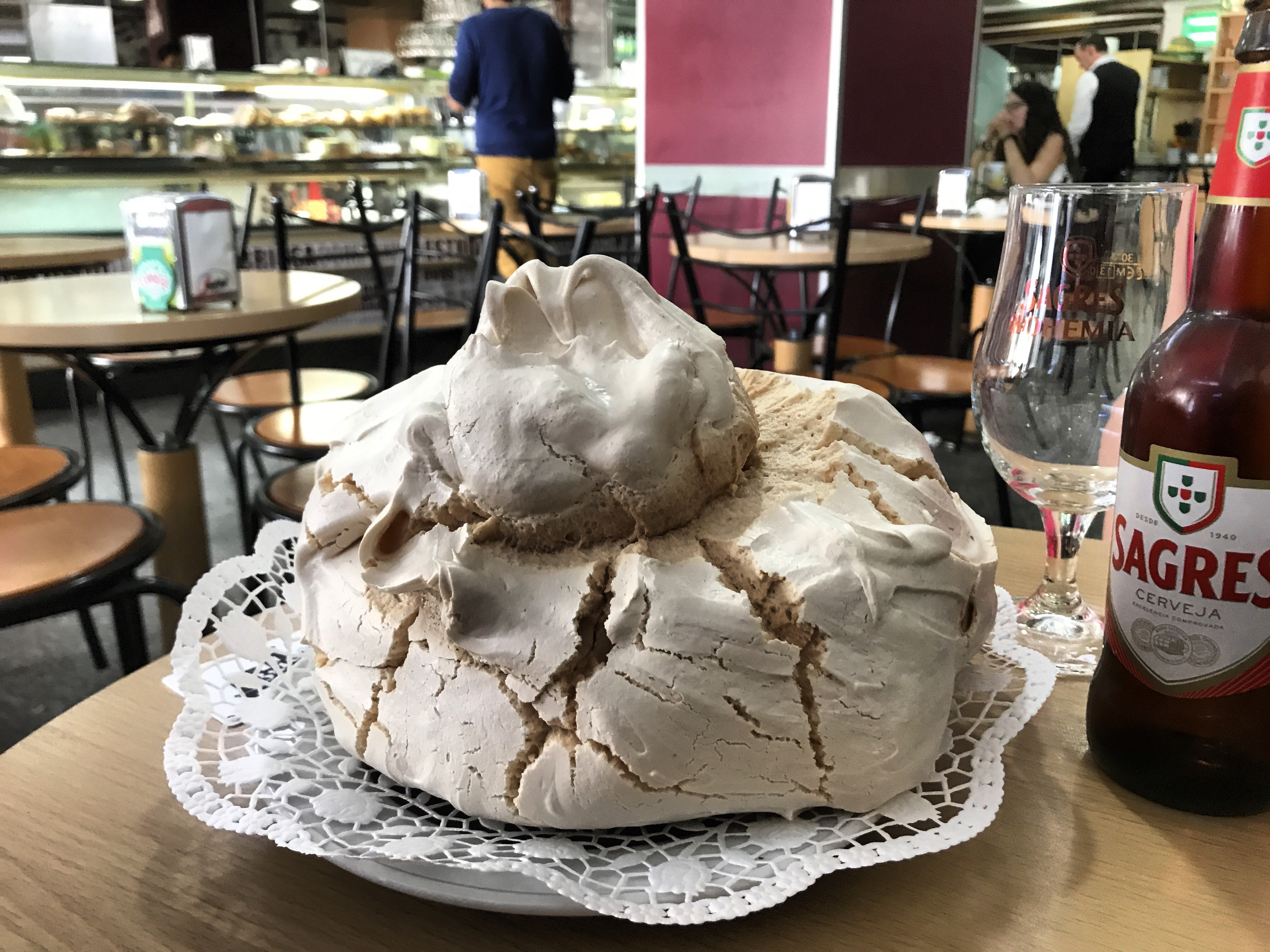 With some advance planning we’d read that Briosa Pastelaria near Largo da Portagem were renowned for giant meringues. The wife was determined to consume one.

The sugary dessert was humongous. It was bigger than my head and weighed twice as much.

Events that followed were like a scene from TV show Man v Food. In this case food was triumphant as the lady wife only got through approximately 36.4% of the beast.

The back-breaking walk up to Coimbra University 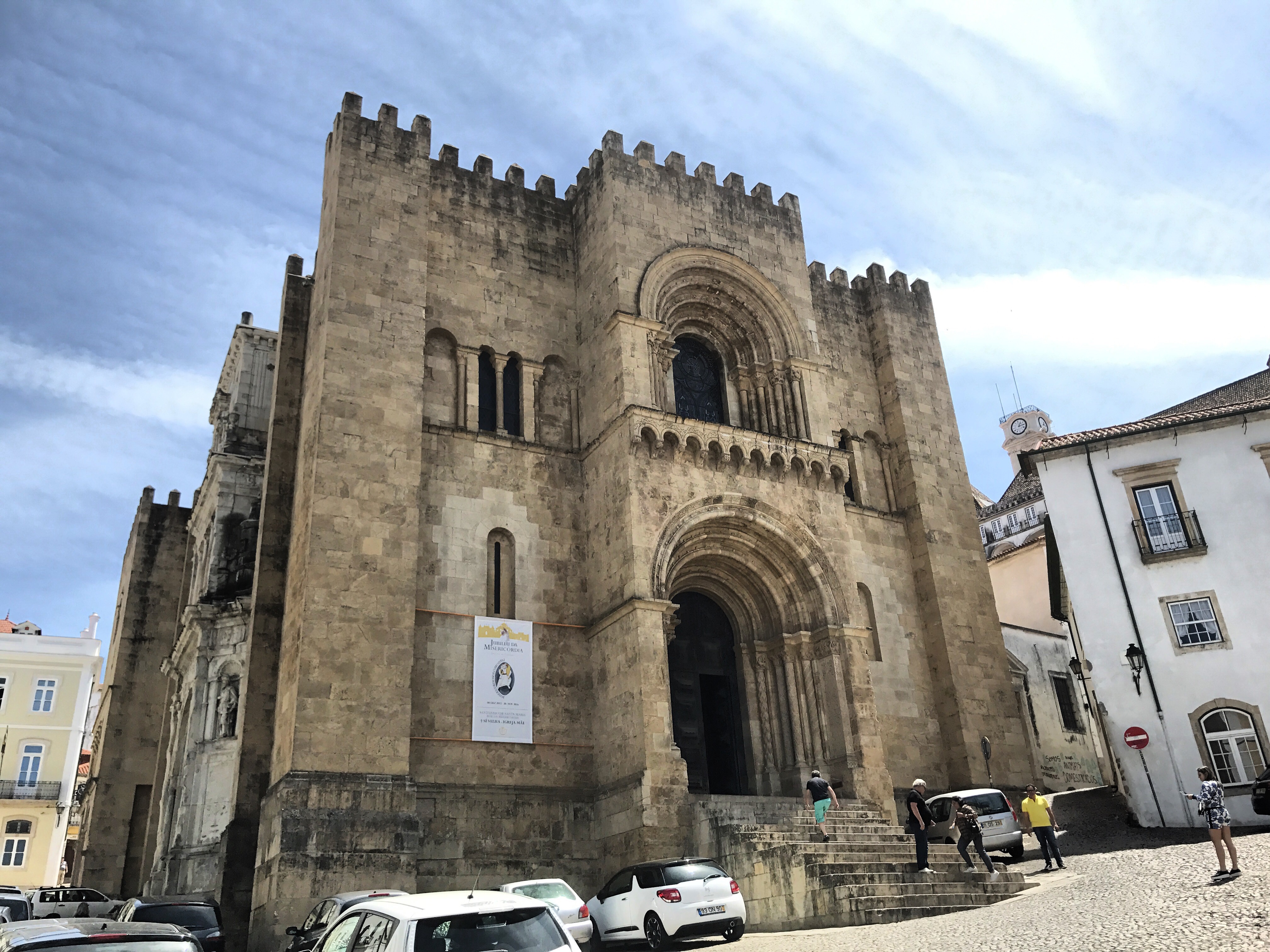 To rid our systems of the influx of sugar from the meringue we decided to walk uphill to Coimbra University.

It starts at the Almedina Arch. This is a Moorish gate that leads to a steep and narrow street through Coimbra’s old town. And when I say steep, I mean steep!

We noticed that there were lots of souvenir shops and cafes along the ascent. They were clearly targeting exhausted travellers.

Just after the halfway mark we came to Sé Velha, an imposing 12th century cathedral. We were amazed not only by this landmark but also by the imaginative parking around it. 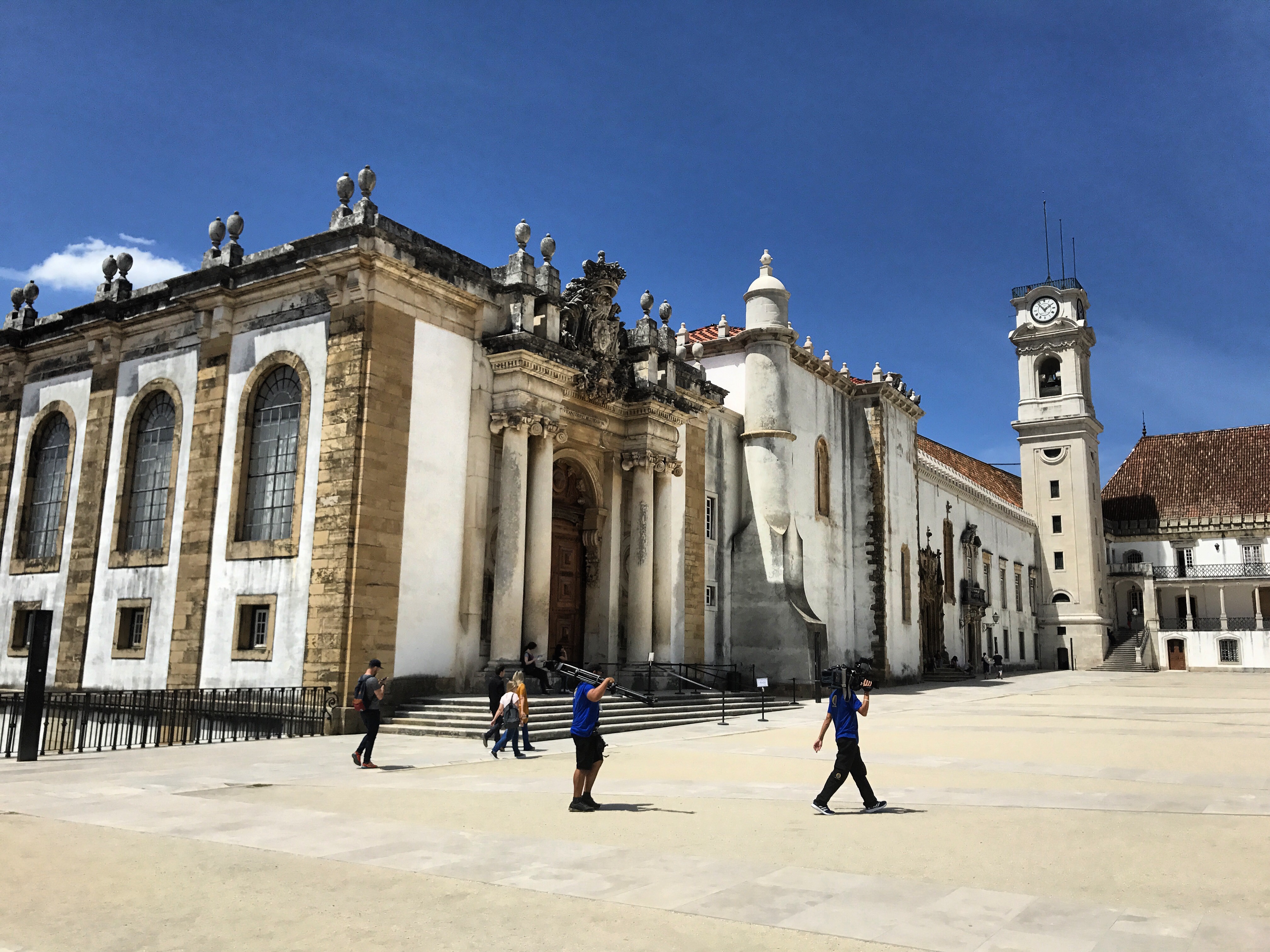 If felt like we scaled Everest once we made it to the top of the hill. Our reward was to be greeted by the magnificent Coimbra University.

Established in 1290 it’s one of the oldest operational universities in the world. It became a UNESCO World Heritage site in 2013.

The university square is vast and impressive. Its central feature is the statue of João III who founded the facility. The entrance to Biblioteca Joanina and Sao Miguel Chapel is found here. 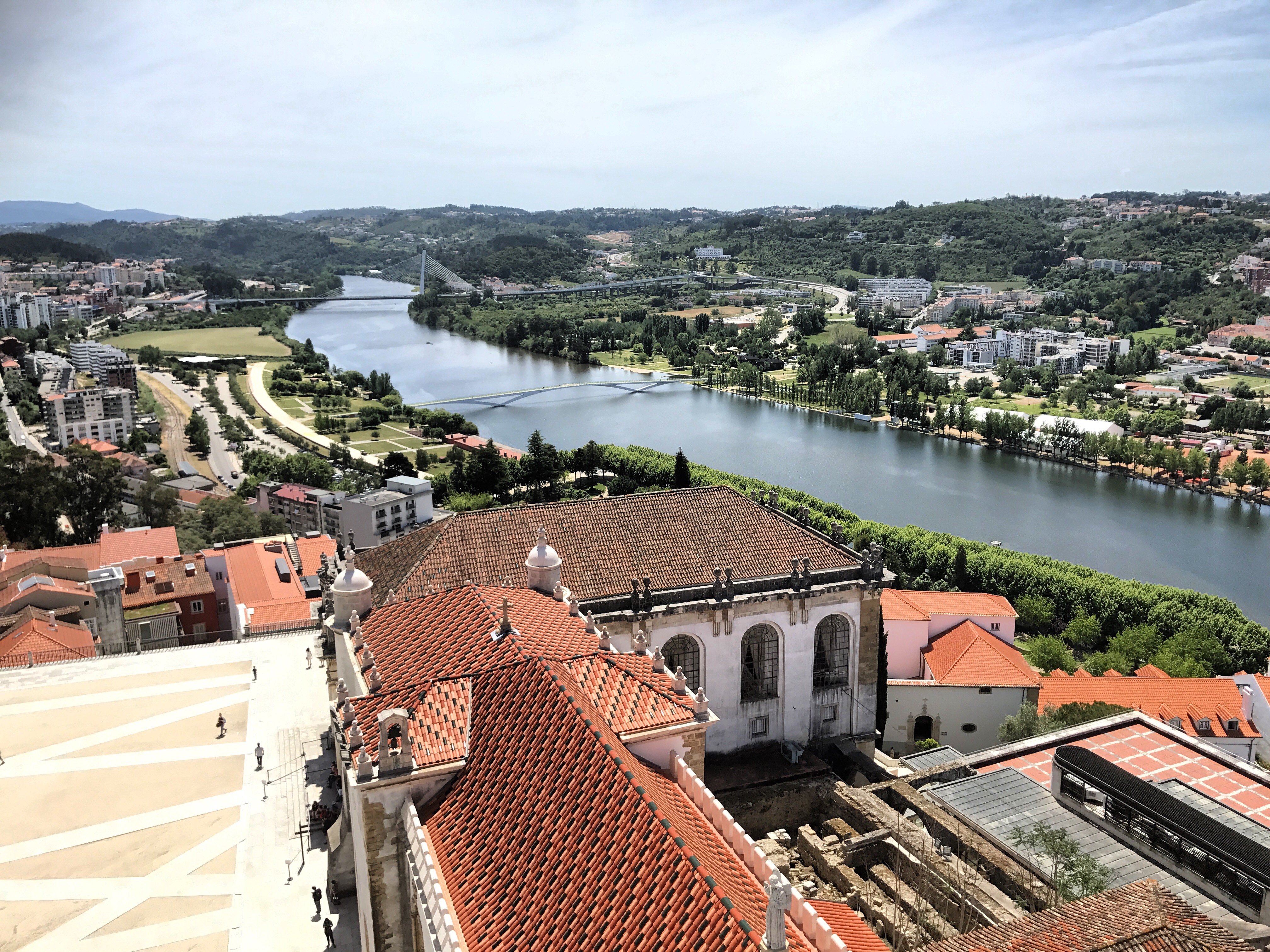 Walking up the hill was hard enough but we also decided to part with €2 and climb the university clock tower. It was 184 steps to the top. Easy-peasy!

Except that the stairway is one of the narrowest I’ve ever seen. I was quite fortunate to be able to squeeze up it. I was glad I did though as the views from the top of Coimbra and surrounding area were phenomenal.

Legend says that the clock was once used to warn students of a curfew. If they weren’t inside their homes by 7pm they’d be thrown in prison! 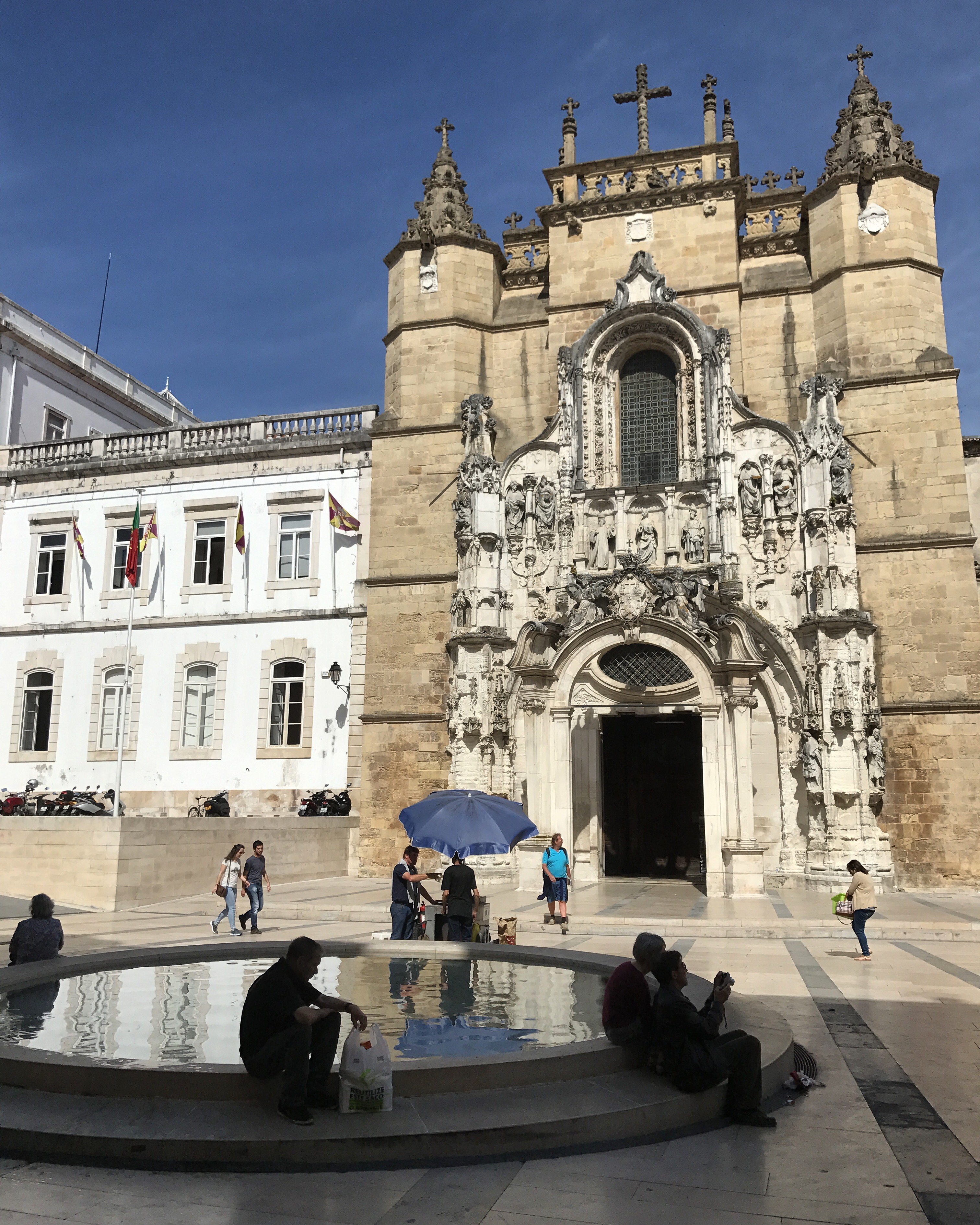 On the way back down the hill we called in for a snack at a local cafe. It was very tasty but unfortunately we were nearly decapitated by a falling umbrella from an adjacent table.

We then had a stroll along Rua Visconde da Luz and had a browse in some of its shops. I had to put up with the wife wanting to spend our hard-earned money in many of these establishments.

At the end of this street we reached Santa Cruz Church. The tombs of some Portuguese kings are located here.

It was also the scene where two chestnut sellers were having a heated debate. Maybe it was about who had the bigger nuts? 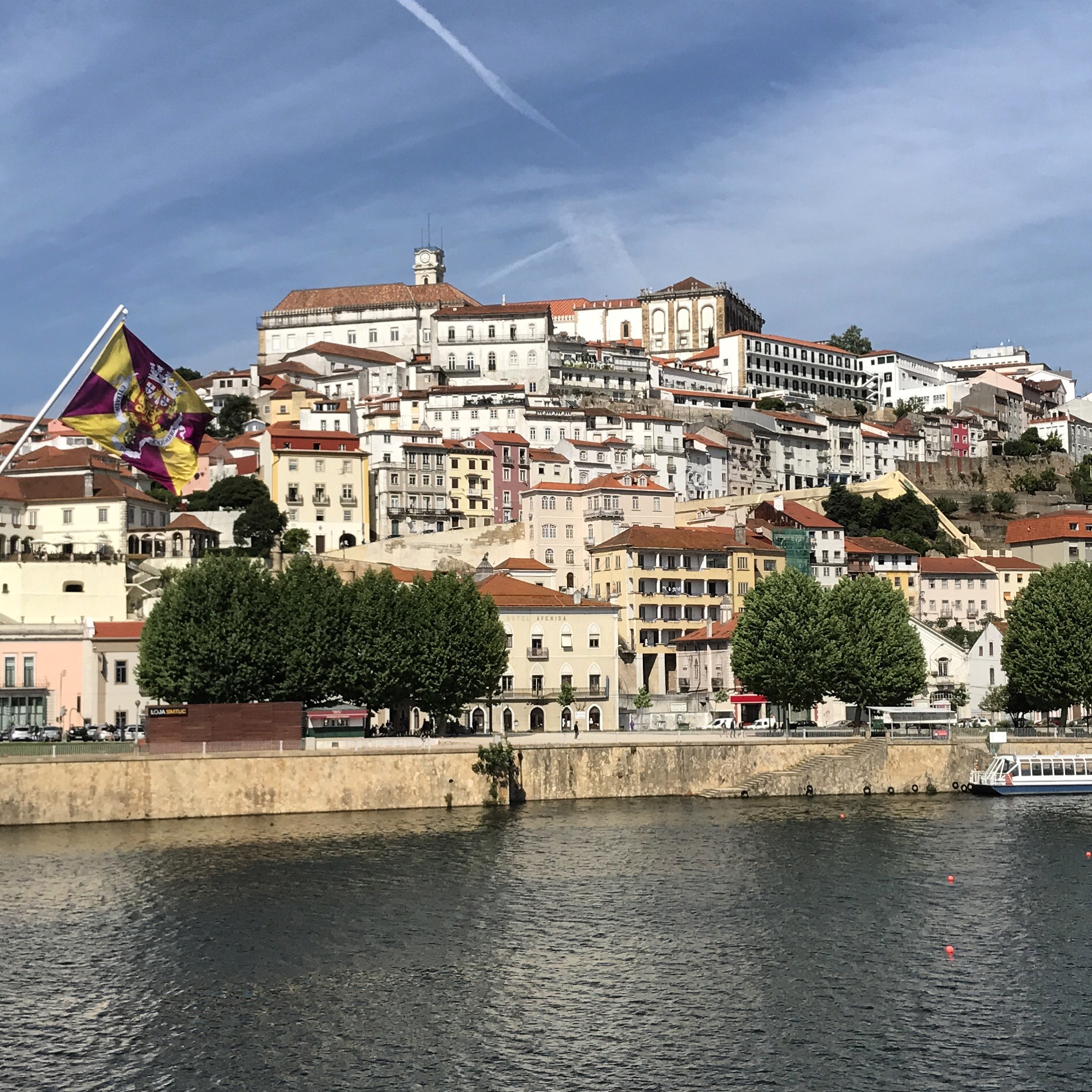 It was then off to get some views of the city from the other side of the Mondego River. So we crossed Ponte de Santa Clara.

Not only were the views of the city great but you could also see just how steep the city is. There’s also a path along the river for walkers and their dogs too. 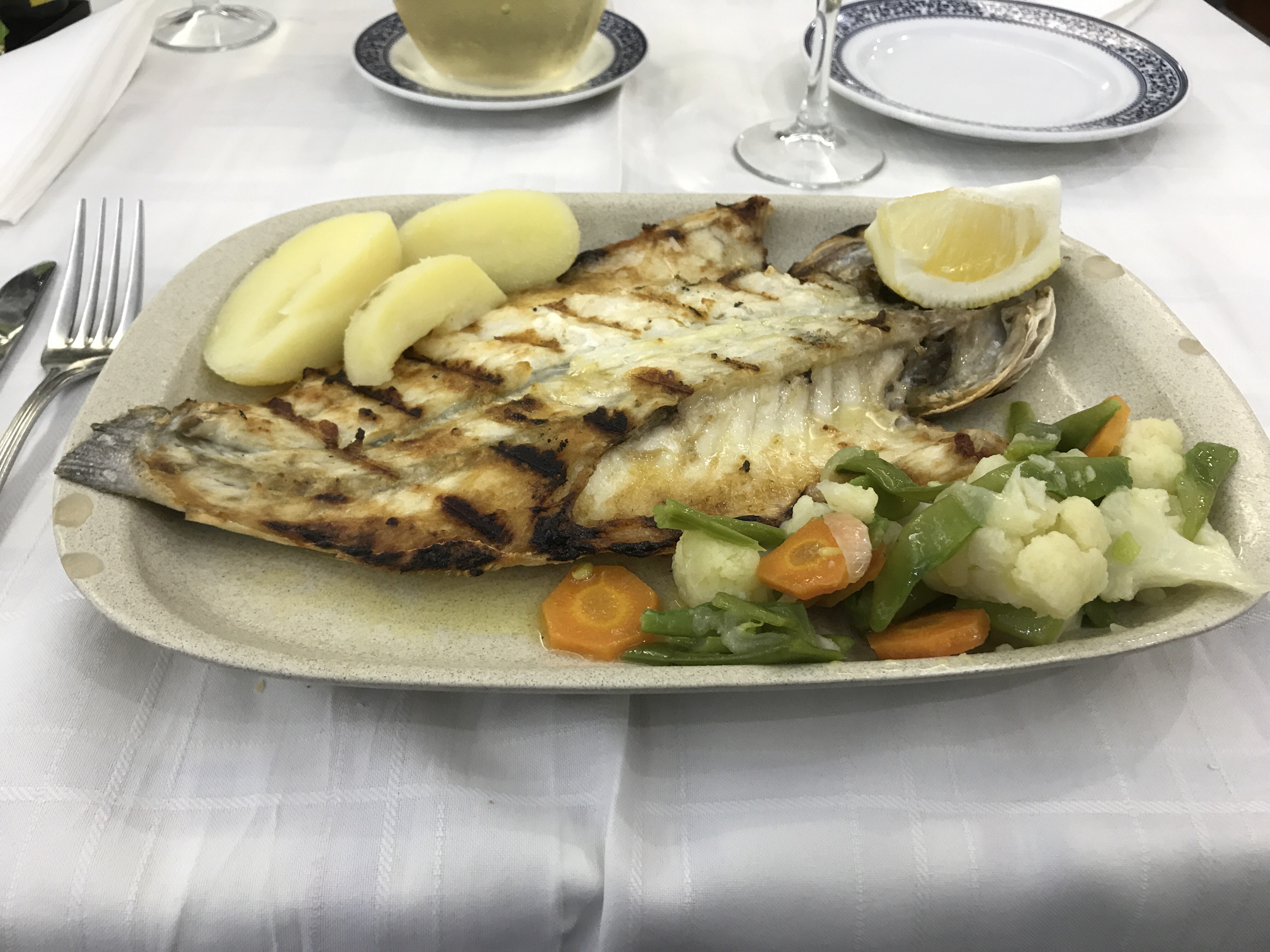 We wandered around aimlessly hunting for our evening meal. After fearing we’d go hungry we stumbled upon Restaurante Vitoria. What a great restaurant it was too!

I can only describe it as simple and delicious Portuguese food. The sea bass I ordered was delightful. Even the wife admitted that the salmon steak she gnawed on was immense. And she’s severely hard to please!

The experience really rounded up what was a great day in Coimbra.

My first ever Teppanyaki. An amazing experience an

The scenic Lobster Beach. Only accessible by boat.