By: ynysforgan_jack
In: Germany, Travel
With: 5 Comments

Striezelmarkt and Dresden’s Christmas Markets are amongst the best in Europe. Find out what you can expect if you are visiting this city at Christmas.

We visited Dresden’s Christmas Markets as a day trip from Prague. Although I had previously visited the city a few years ago as well.

After arriving at Dresden Hauptbahnhof we started walking towards the city centre and the Christmas Markets. We were all very excited, but most of all my wife – she loves all things Christmas! 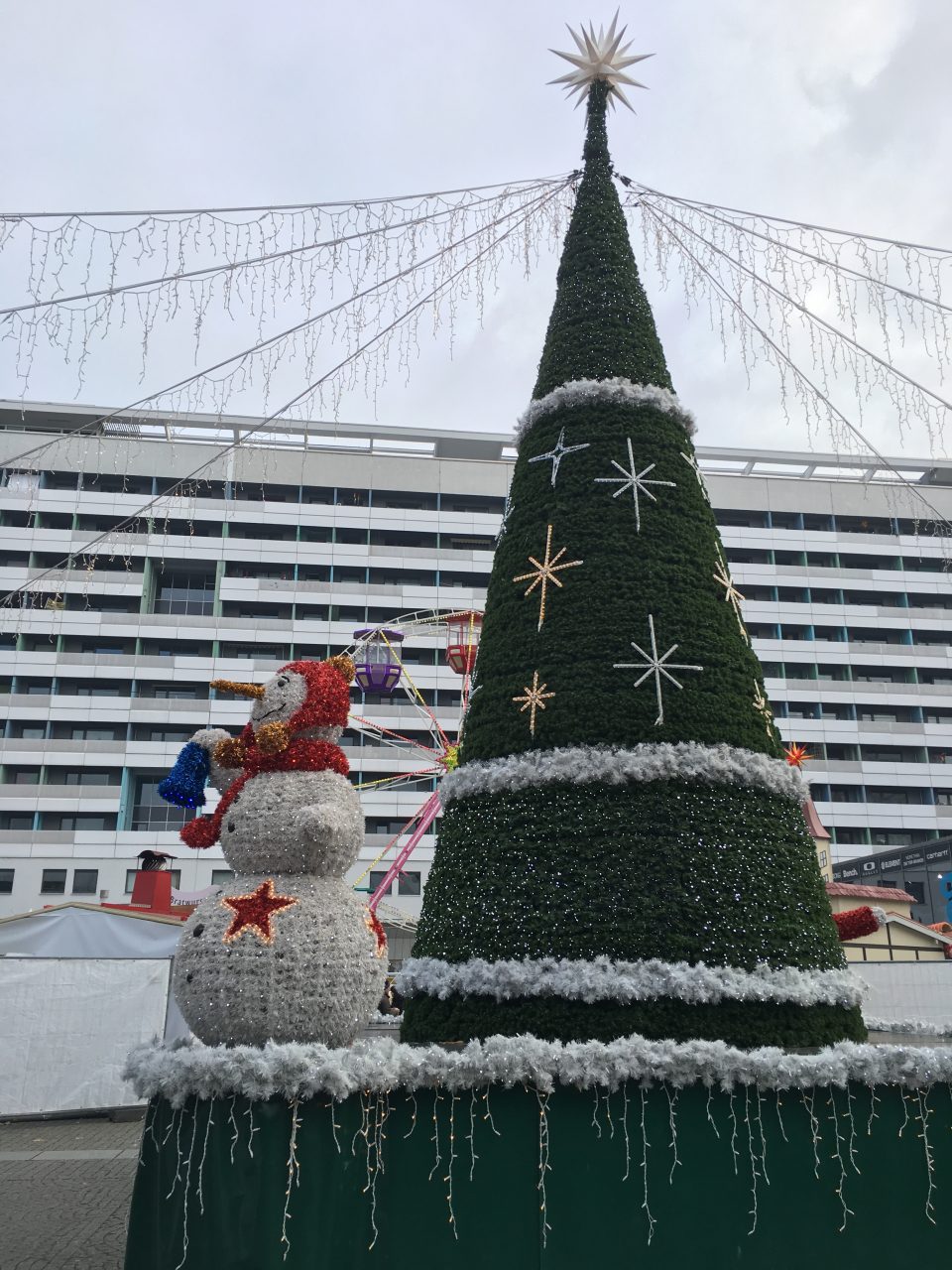 The first Christmas market we discovered was the Dresden Winter Lights Market. We found it on Prager Strasse near the large shopping mall. As the name suggests this market seems to focus on Christmas lights. In the centre of the market is a 15 metre high Christmas tree and snowman.

Christmas stalls here were selling the usual Christmas products and food. But as a football fan, I was more intrigued by the Dynamo Dresden stall! 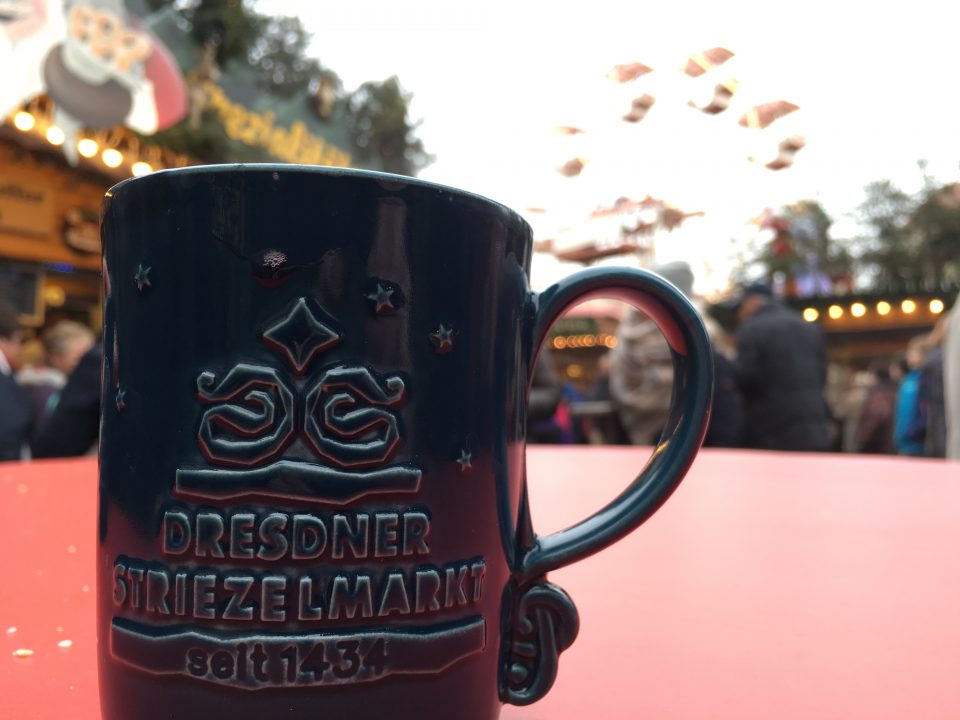 After a short walk from Prager Strasse we arrived at Altmarkt, the city’s main square. Altmarkt is home to Dresden’s biggest Christmas market – Striezelmarkt.

Striezelmarkt is one of Germany’s oldest Christmas markets and it celebrated its 582nd anniversary in 2016.

At the centre of the Striezelmarkt is a 14-metre high Christmas pyramid and the world’s largest usable Christmas arch. We browsed some of the wares on offer from the stalls at Striezelmarkt. Items on sale included wooden ornaments, candle pyramids, nutcrackers, gingerbread, stollen and of course – Glühwein.

Like us, you can also buy a souvenir Striezelmarkt Glühwein cup to take home. 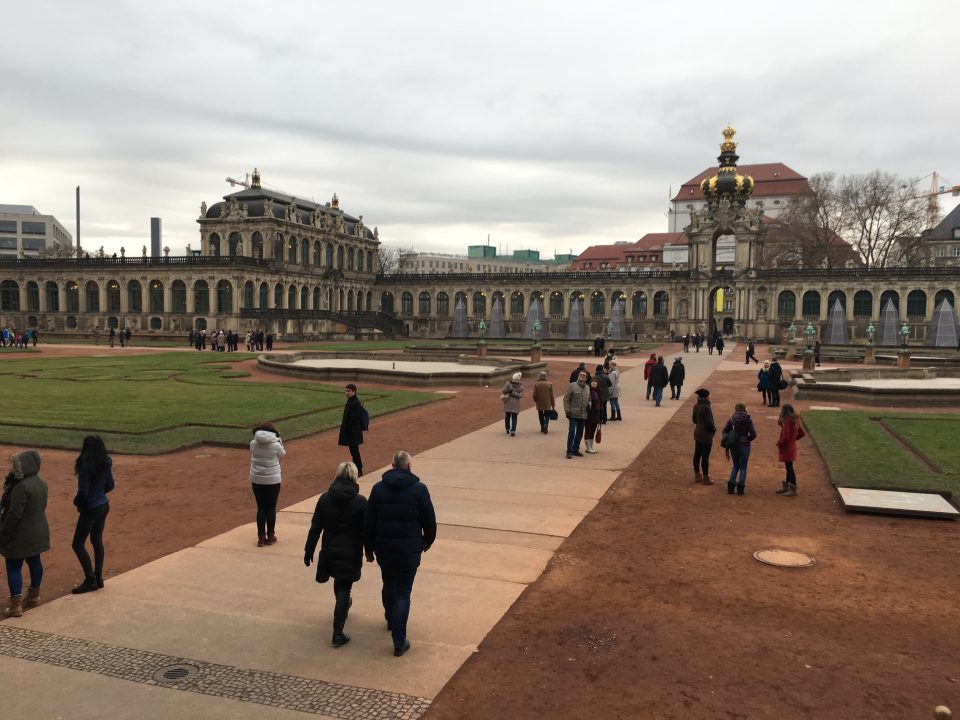 Taking a short break from the Christmas Markets we decided to see some of Dresden’s other attractions. First on our list was Zwinger.

Zwinger is a palace that is built in Baroque style. The palace once served as the orangery, gallery and arena of the Dresden Court. Today, the Zwinger is a museum that holds the Old Masters Picture Gallery and the Dresden Porcelain Collection.

We walked around the courtyard to take in the impressive architecture. Although the fountains were switched off on our visit. 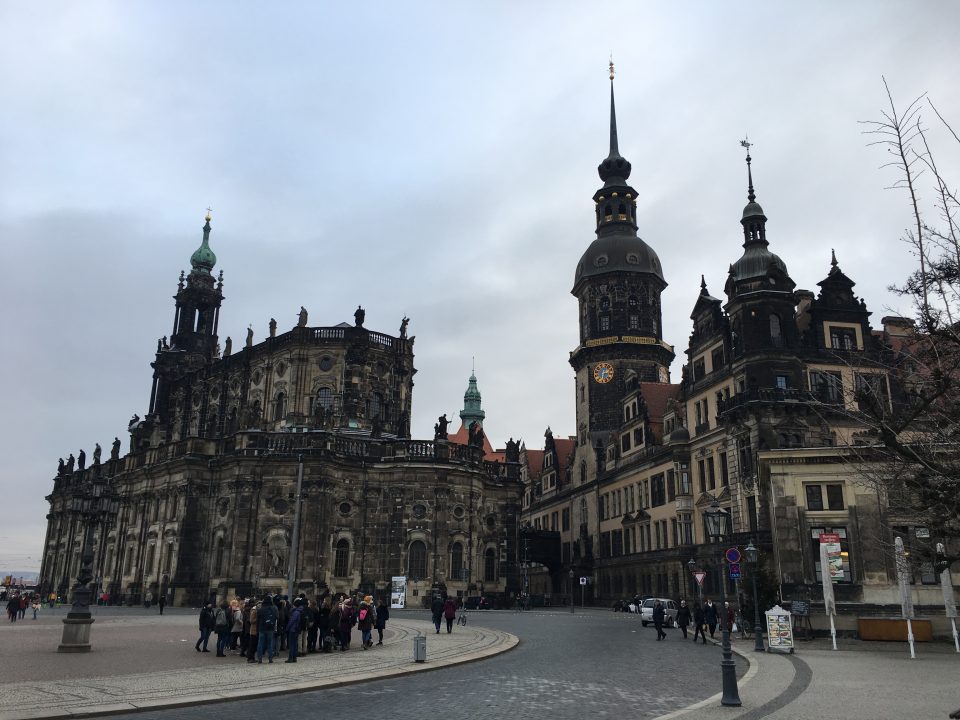 Leaving Zwinger we crossed the road and arrived at the site of Residenzschloss and Dresden Cathedral.

Residenzschloss is one of the oldest buildings in the city. It is also known as Dresden Castle and served as the residence of the electors and kings of Saxony. Residenzschloss is made up of many different architectural styles such as Baroque and Neo-renaissance.

Dresden Cathedral was built in the 18th century, it is linked to Residenzschloss by a walkway.

Christmas Market at the Frauenkirche 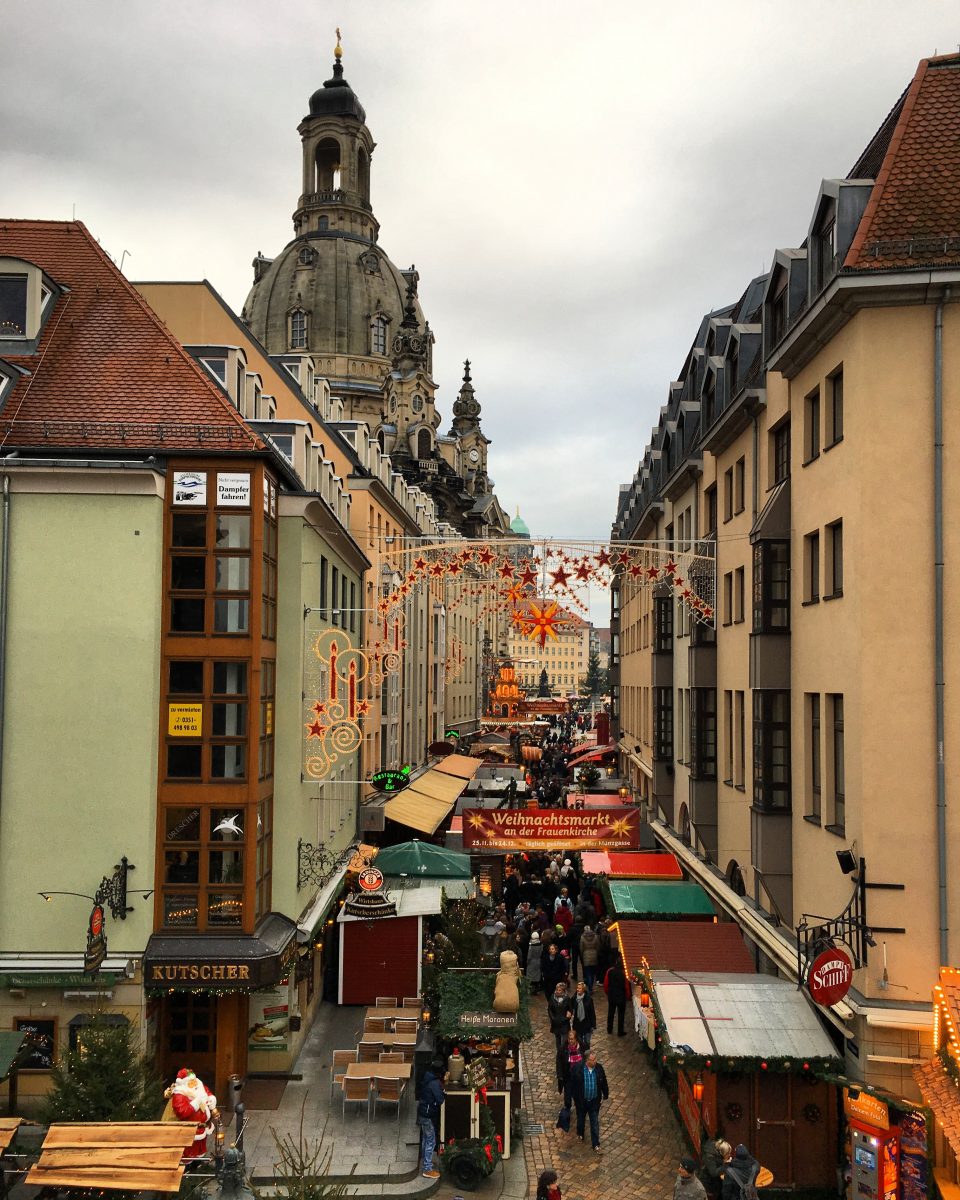 We then made a small walk along the River Elbe to the Christmas Market at the Frauenkirche. This is a smaller Christmas market and is directly outside the restaurants and bars near Dresden’s Frauenkirche church.

This market is really pretty because it’s in the middle of the historic old town. The narrow streets meant that it was extremely busy though.

With a few decorations bought we then visited Frauenkirche. This church is one of Dresden’s main attractions and features one of the largest domes in Europe. 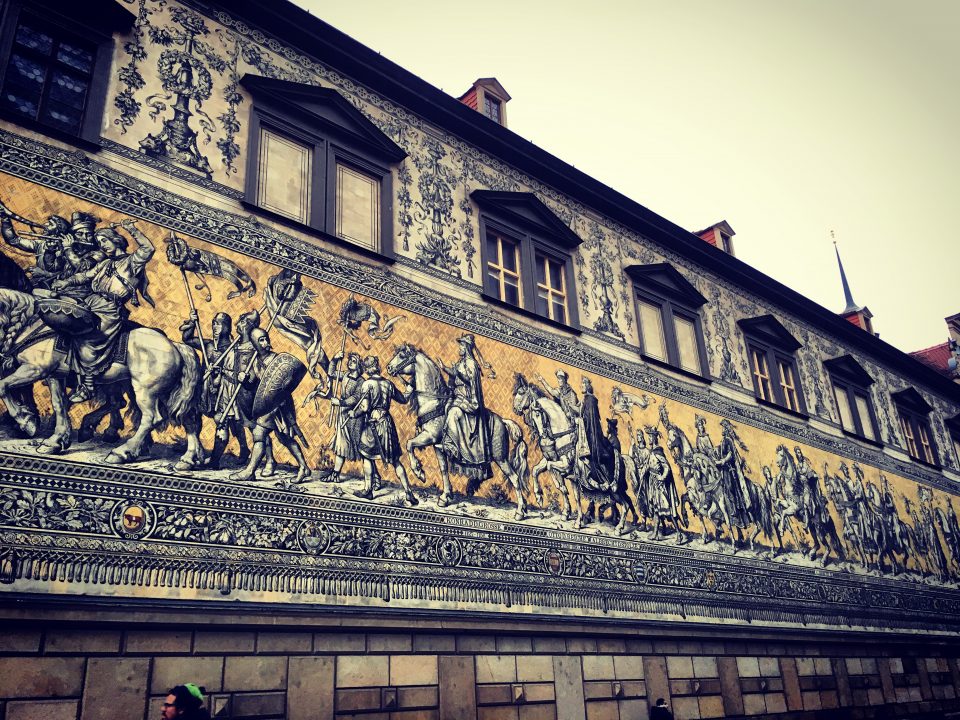 Near Frauenkirche is the impressive Fürstenzug. This is a large mural depicting the rulers of Saxony. It is made up of around 23,000 tiles over a length of 102 metres. Interestingly, the mural only suffered minimal damage during the 1945 bombing of Dresden.

Christmas Market on the Neumarkt 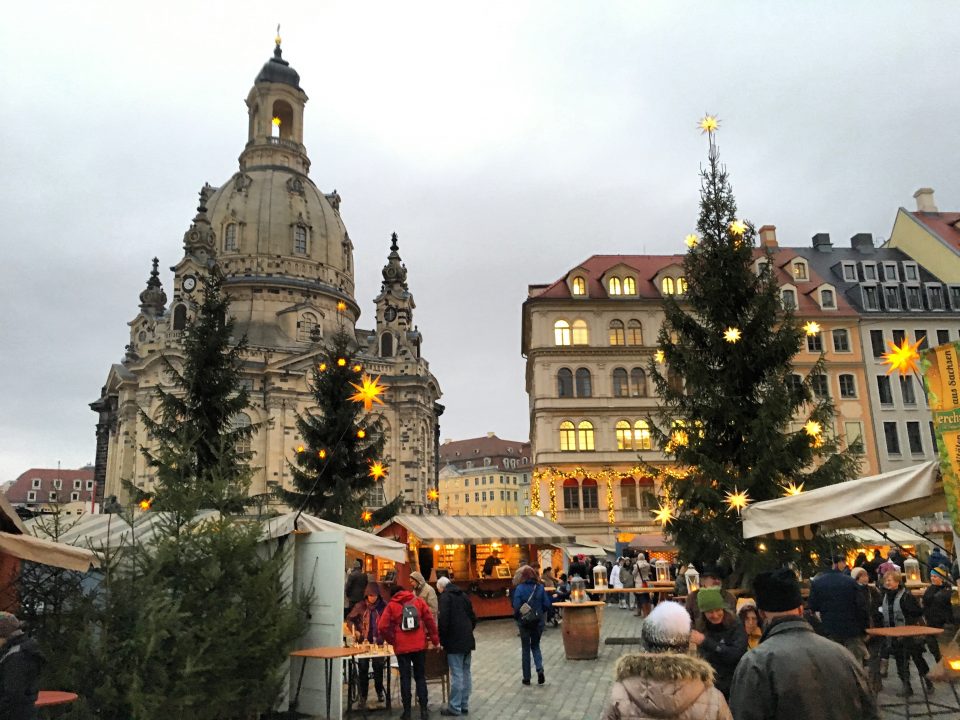 After a quick beer, it was time to visit the Christmas Market on the Neumarkt. This is a separate market to the one at Frauenkirche. Even though they are only a few metres away from each other.

Whilst selling the usual products you’d expect to see in a Christmas Market, this market seemed to have an old world charm. The atmosphere got even better when it started to snow. 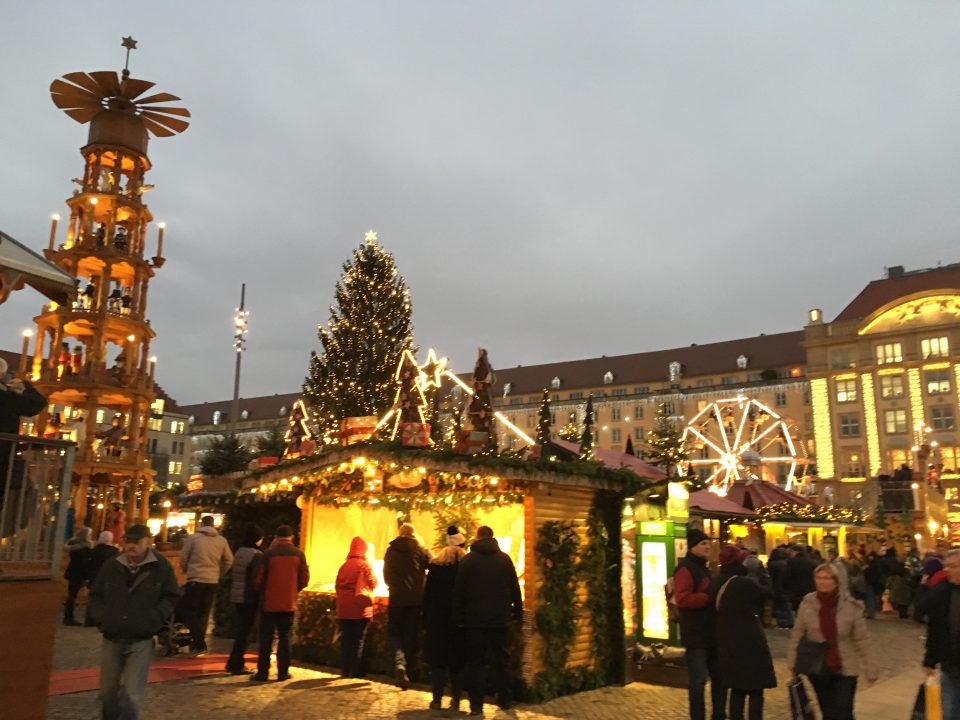 With it getting dark, we headed back to Striezelmarkt for one last look around. The atmosphere at night was even better than it was earlier in the day. More so because of the live music, entertainment and because all the stalls and decorations were tastefully lit up.

We had a delicious beef sandwich and a few beers before having a good look around the stalls. The wife just had to buy some more items to take home with her!

Unfortunately, it was then time to get the train back to Prague, so we made our way back through Prager Strasse and back to the train station. 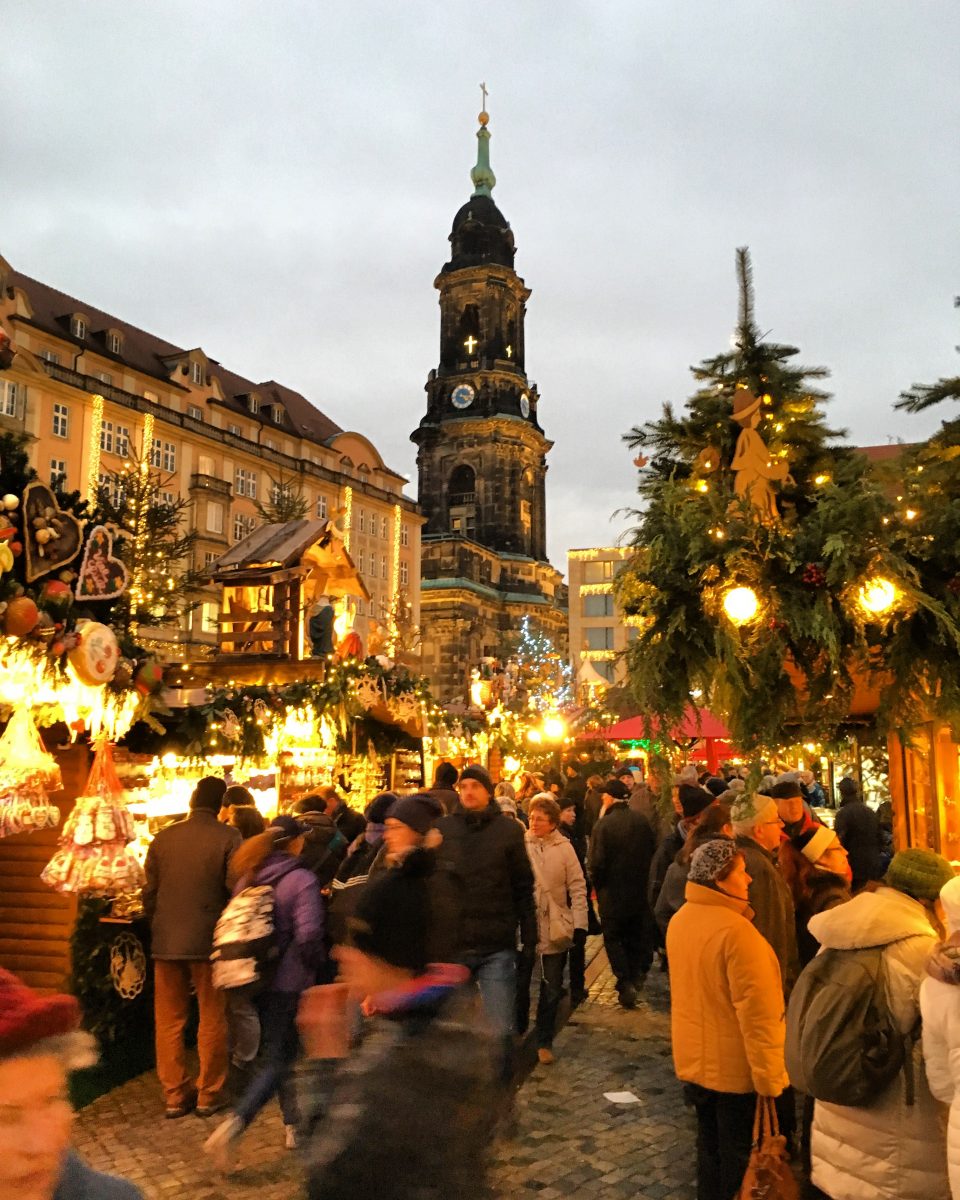 We had such an amazing time at Dresden’s Christmas Markets. Each market we visited seemed to have its own little theme that distinguished it from the others.

But Striezelmarkt was by far our favourite one. In fact, it was the best Christmas market we had visited in Europe!

Dresden is such a great city too, no doubt we will be back one day to see more of it.

2017-11-26
Previous Post: 12 things you should see in Amsterdam
Next Post: Travelling to Vienna and then heading to the Christmas Market at Karlsplatz